USW-Represented Workers Employed At Alcoa/Arconic In Massena Say No More Concessions! - As Current Contract Gets Set To Expire, Employees Hit The Picket Line 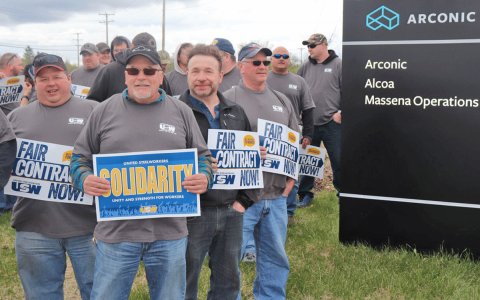 (MASSENA, NEW YORK) – “No more concessions!” - That’s what Union Workers are telling Arconic and Alcoa management as their contract gets ready to expire on Thursday (May 16th).

“You put your time in.  You put your money in.  You're part of that company.  You want a slice of that pie,” United Steelworkers (USW) Local 420-A Treasurer Jason Taraska said as USW Members picketed outside the Massena Plant.

The big issue is pensions.

The USW says both companies want to freeze their pensions and replace them with 401(k) savings plans.  They say the proposed freeze will "undermine retirement security" and "shift the risk of poor investment performance to employees."  "Arconic has enough cash for its executives, lenders and stockholders, but not to fund the promises to Retirees or provide retirement security to active Employees," the USW said.

Taraska said: “The main reason people came to work at Alcoa and now Arconic are the benefits.  You know you're taken care of.  You wanted something that you didn't have to worry about.”

These are the first contract negotiations since Alcoa spun off Arconic - that means each company is negotiating its own separate contract.

That also means there could be a Strike at one plant - but not the other.

“This town and this area have been used to just one contract.  So it does make things a little difficult trying to separate each company and stay on top of stuff and what's going on with each one of them,” Taraska said.

Alcoa feeds Arconic much of its raw material, but Arconic says it has "plans to manage the situation" if Alcoa has to limit or stop production.

Alcoa also says it's prepared for a Strike.

More than 400 Union Members work at Alcoa and Arconic.

There has not been a major Alcoa Strike in Massena since 1986.

The time for the expiration of the union contract at both companies is now 12:59 a.m. on Thursday.

However, contracts can be extended by mutual agreement of company and Union.

To Directly Access This Labor News Report, Go To: www.wwnytv.com/story/40474863/contract-talks-go-down-to-the-wire-at-alcoa-arconic-in-massena#.XNtS6stRCik.facebook.  And For More, Go To USW Local 420A’s Facebook page at www.facebook.com/steelworkers420A/.