Helped By Appointees From Republican President Trumps On The National Labor Relations Board, Anti-Union University Administrations Are Fighting Graduate Student Workers Who Want To Unionize 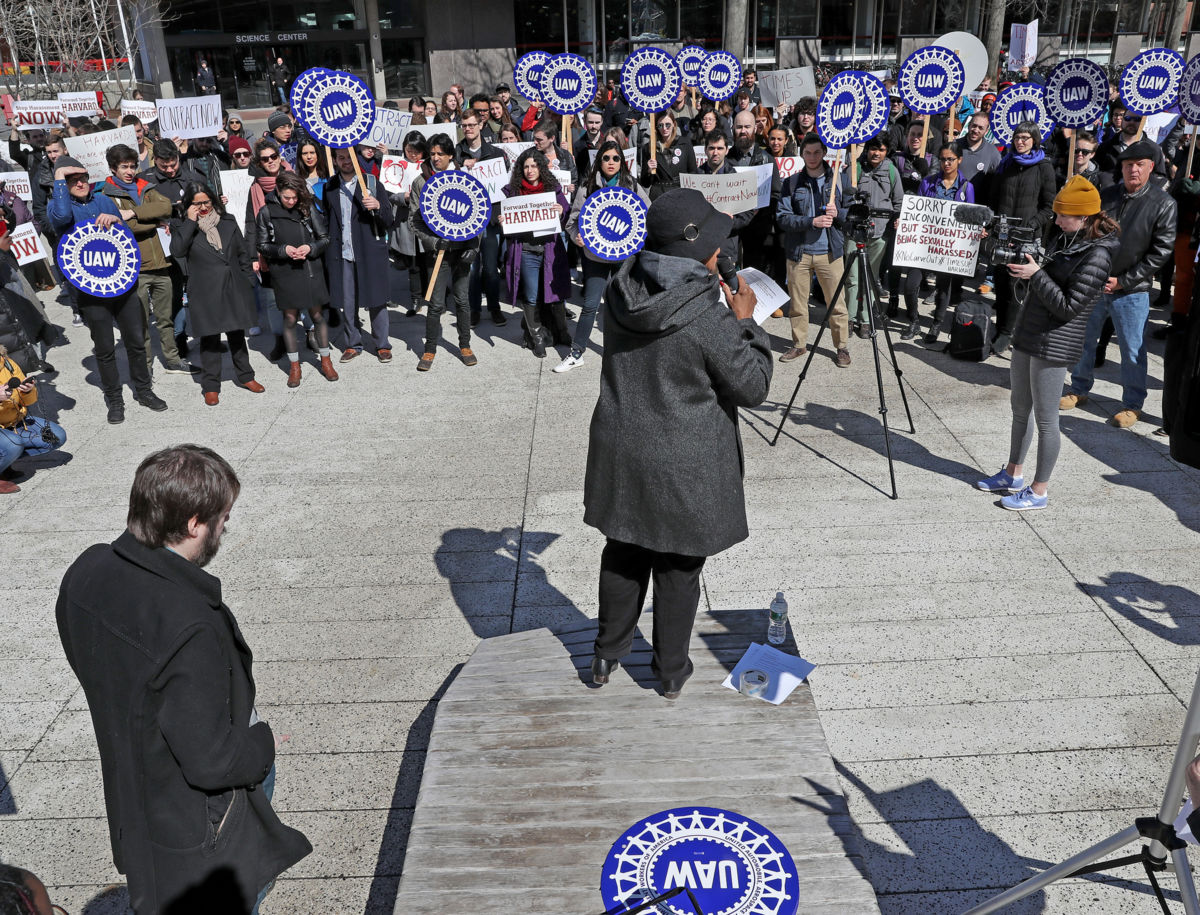 Since the National Labor Relations Board (NLRB) ruled in August 2016 that Graduate Student Workers at private universities have the right to Unionize, Graduate Student Unions in the United States have surged - yet, currently, nearly all of these Unions face resistance and Union-Busting Efforts from their university administrations.

At Boston College, Graduate Student Workers voted to Unionize in September 2017.  The university has refused to recognize the Union - despite the vote.

The United Auto Workers (UAW) withdrew their petition with the NLRB as an affiliate to the Graduate Student Workers Union at Boston College in anticipation of an unfavorable ruling against them by the NLRB.

The NLRB is now dominated by appointees from Republican President Donald Trump’s Administration, who are hostile toward Union efforts and protections.

Sixteen students were targeted with academic disciplinary proceedings for handing out flyers outside a fundraising concert at Boston College in September 2018.

“I wound up receiving an administrative warning - which is the highest level of discipline the university gives out before they put you on academic probation,” Sam Levinson, a Graduate Worker in the Chemistry Department at Boston College, recalled. “It was a really stressful distraction from what I want to get done, which is my work.  The reason we want to have a Union contract is to alleviate some stress and get our work done.”

“Four universities, Harvard, Georgetown, Brown, and Columbia, have all agreed to bargain with Graduate Workers and completely outside the NLRB process for recognition with Georgetown and Brown,” said Ben Cain, an Organizer with UAW. “It’s another way that Boston College is out of line with the direction that universities are going.”

In December 2018, Massachusetts State Senator Jamie Eldridge and several Community, Labor and Faith Leaders had the door shut in their face while attempting to deliver a petition signed by 3,000 Community Members and 700 Graduate Student Workers asking Boston College to bargain with the Union.

A Boston College spokesperson said in an e-mail: “Boston College is opposed to Graduate Student Unionization on the grounds that it undermines the longstanding collegial mentoring relationship between student and faculty that is a cornerstone of the academic experience.”

Labor conditions in higher education have increasingly shifted toward using Graduate Student Employees and Contingent Faculty over Tenured and Tenure-Track Faculty because they provide a cheaper labor source for universities.

The average Graduate Teaching Assistant makes less than one-third the salary of the average Professor, according to a 2018 study conducted by the Economic Policy Institute (EPI).

Part-Time Faculty in the U.S. have increased from 30% in 1975 to more than 50% of all faculty appointments, according to the American Association of University Professors and a 2015 report by the UC Berkeley Labor Center found 25% of Part-Time College Faculty in the United States rely on at least one Public Assistance Program.

“The upsurge in Graduate Student Organizing is primarily a reflection of the changing conditions in higher education,” said Gordon Lafer, a Professor at the University of Oregon and former Senior Labor Policy Advisor for the U.S. House of Representatives Committee on Education and Labor. “While in graduate school, PhD students are the cheap Labor Force that enables universities to decimate the ranks of tenure-track faculty, thus ruining the career prospects of PhD students once they earn their degrees.  This both has made economic conditions more important while in grad school, and has made the Grad Student Union Movement into a vehicle for expression of the anxiety, resentment and pushback against this restructuring of higher education.”

To Continue Reading This Labor News Report, Go To: https://truthout.org/articles/anti-union-university-administrations-fight-graduate-student-worker-organizing/