Surely You Know Mike Lindell, The Owner/Pitchman For MyPillow Who Moonlights As A Donald Trump Super Fan - Well Now, After Bragging Up Trump's Prosperity, Lindell Decided to Lay Off 150 Workers Employed At His Minnesota Plant

Published Tuesday, May 14, 2019
by Pete Kotz/CityPages.com 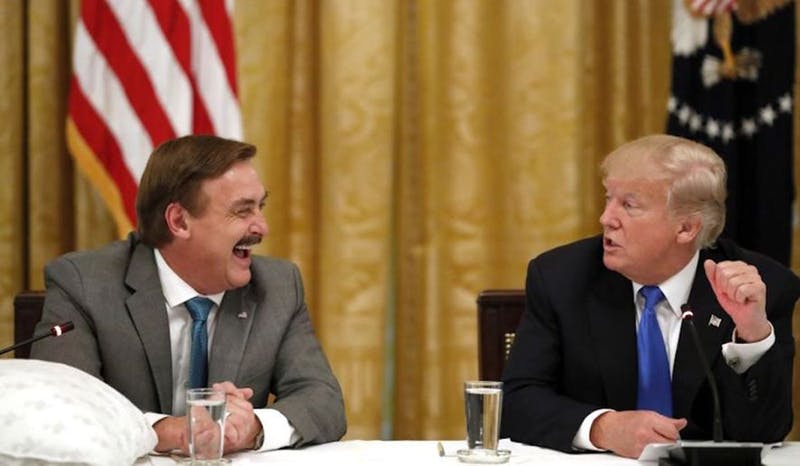 (SHAKOPEE, MINNESOTA) - Just last month, in a self-described “excellent tax-day commentary,” he was touting the miracle of the Trump tax cuts, which rained untold riches on big corporations and the wealthy, but not much on anyone else.

“At MyPillow, we were able to give across-the-board raises of (5%-to-10%) to every Employee thanks to President Trump’s 2018 tax cuts,” Lindell claimed in a piece for The Minnesota Sun, a Tennessee site run by Republican mega-donors that poses as a local news outlet.

“Thanks to President Trump’s America First agenda, hope has turned into confidence for business owners and their Employees in Minnesota and across the country.  Wages are going up, and small business owners like myself are still eager to expand,” the MyPillow Owner said.

But Lindell isn't exactly what most would consider a small businessman.

He employs 1,500 people at his Chaska Headquarters and Production Facility in Shakopee.

With an estimated net worth of $300 million, he has enough extra loot to bankroll an anti-Planned Parenthood movie.

All this means he was also among the greater beneficiaries of said tax cut.

Yet, economists have repeatedly warned the Republican Law may amount to little more than a sugar high.

When 70% of your economy is based on consumer spending, and you give all the money to those who already own everything they need, it's not a long-term score.

Especially when you fatten the Federal Deficit like a State Fair hog.

Decreased tax receipts - combined with increased spending - bloated the deficit 77% in the first four months of this year alone, to be repaid later by parties yet determined. (Read: You.)

But it now seems Lindell's sugar high has come to a halt as he just announced the layoffs of 150 MyPillow Production Workers in Skakopee.

The official rationale was the need to take production space at the facility to accommodate shipping for a new venture, MyStore.com, an “on-line store for entrepreneurs and inventors to sell their products.”

Left unsaid was the apparent decline in MyPillow sales, which have made the production of 150 Workers unnecessary.

Not all Lindell's woes can be attributed to the larger economy.

He's facing boycotts over his advertising support of Fox News bombardiers Laura Ingraham and Tucker Carlson and he's also soured at least some customers with his business practices.

Two years ago, he was forced to lay off 140 people after complaints of false advertising.

The Better Business Bureau withdrew the company's accreditation and changed its rating from an A+ to F.

So while Lindell may have a generous friend in the White House, it appears his customers still have some say over his continued wealth.

To Directly Access This Labor News Report, Go To: www.citypages.com/news/after-bragging-up-trumps-prosperity-mypillows-mike-lindell-lays-off-150-in-shakopee/509824971?fbclid=IwAR3smDKVf7jHGAGfA_Gvqn9XSUvnJzlo1SKU6UZWjlQesZ4TkU4gVkeatV8