Mothers Day Celebrated Year Round In These NYSUT Teaching Families 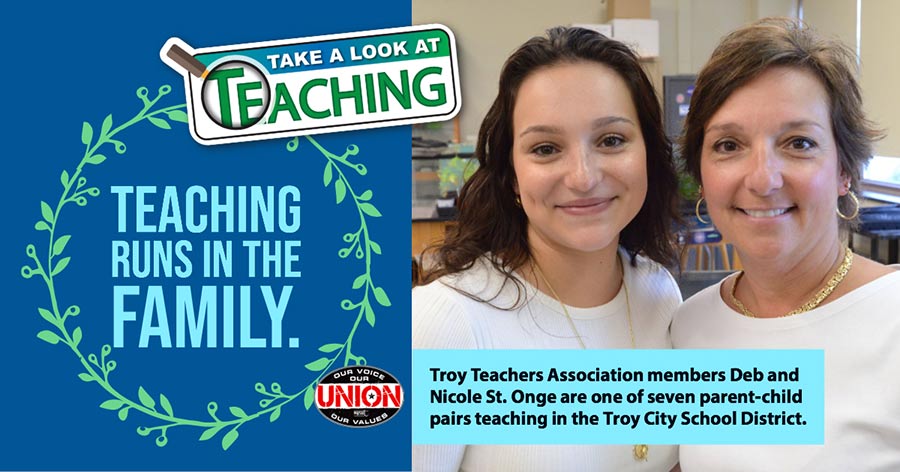 (TROY, NEW YORK) - Nothing against flowers, but for some women, the best Mother’s Day present is to share a career passion with their son or daughter – and seven mothers in the Troy School District get to experience that every day as Educators working in the same district as their children.  And - some of the sons and daughters knew for as long as they could remember that they wanted to be Teachers, while others resisted.

Genevieve L. Stinson’s mom, Janice Strang, was an Elementary Teacher in Troy.  Her grandmother, Betty Strang, was a Middle School Teaching Assistant in the library until she was 78 years old.  Genevieve had other plans - any other plans, just not teaching.  “I was a pre-law major as a freshman,” she said.  Then she switched to accounting, but on a school break she spent time in her mother’s classroom for community service credits.  “I fell in love with it,” she said. “I went and immediately changed my major.”  She’s been a Teacher for 31 years and now shares those joys with her daughter, Genevieve M. Stinson.

Daughter Genevieve remembers playing school with her sister, using magazines as textbooks, and posting rules such as “NO RUNNING” in the dining room.  She knew she was headed to the front of the class for her career.

Together, the mom and daughter discuss classroom procedures and how to help themselves and students get organized.  “I was ready to jump right into the curriculum,” said daughter Genevieve. “But my first year was a lot more than I envisioned.”  She tapped her mother for help, as well as a mentor through a program established by the Troy Teachers Association.

Troy TA President Seth Cohen was initially alerted to the plethora of family bonds in the district via a Facebook post.  He’s since located seven pairs, including Teaching Assistants Margaret LeRoux, who works in a school library, and her daughter, Lauren, who works in an elementary school while she pursues her master’s degree to be a Teacher.

Teaching was not Sarah Jabour’s plan.  “I was a fashion major.  I was sure,” she said.  She went to SUNY Oneonta, which has a cooperative agreement with the New York City-based Fashion Institute of Technology.  “Very quickly I felt like I wouldn’t be making an impact or doing enough.  I didn’t know what I was working toward,” said Sarah.  She put the brakes on fashion and became a communications major.  Then came the decision to teach.  Now, she educates fifth graders, as does her mom, 30-year veteran Ann Marie Jabour.  She had long ago figured her daughter for a teacher.  “I saw qualities in her - she was a planner, an organizer.  She always put extra into things,” said Ann Marie.

Sarah appreciates being able to get support from her mom, who is familiar with procedures and can help her navigate her new profession. “We call each other on the MX (smart board),” she shared.  Ann Marie, in turn, said her daughter helps with the rapidly changing classroom technology.  “I ask for help - often,” she said. “Which is exactly the type of learner we try to create!”

Deborah St. Onge and daughter Nicole St. Onge also credit each other for the professional help they share.  Nicole is in her first year, teaching sixth grade.  “It’s always like there’s a million things to do.  I have a huge bag.  People call it my diaper bag,” she said, laughing.  Her colleagues are helpful, she said, as is her Union-provided mentor.  The familiarity she has in the classroom is also comforting.  “I used to put her in the swing while I set up my class,” said Deborah.  Now the pair collaborate on strategies and planning.  Deborah said her daughter keeps teaching fresh for her and she enjoys the banter and sharing stories.

To Continue Reading This Labor News Story, Go To: www.nysut.org/news/2019/may/mothers-day-celebrated-year-round-in-these-teaching-families