Published Monday, May 13, 2019
by Silver Krieger/LaborPress.org 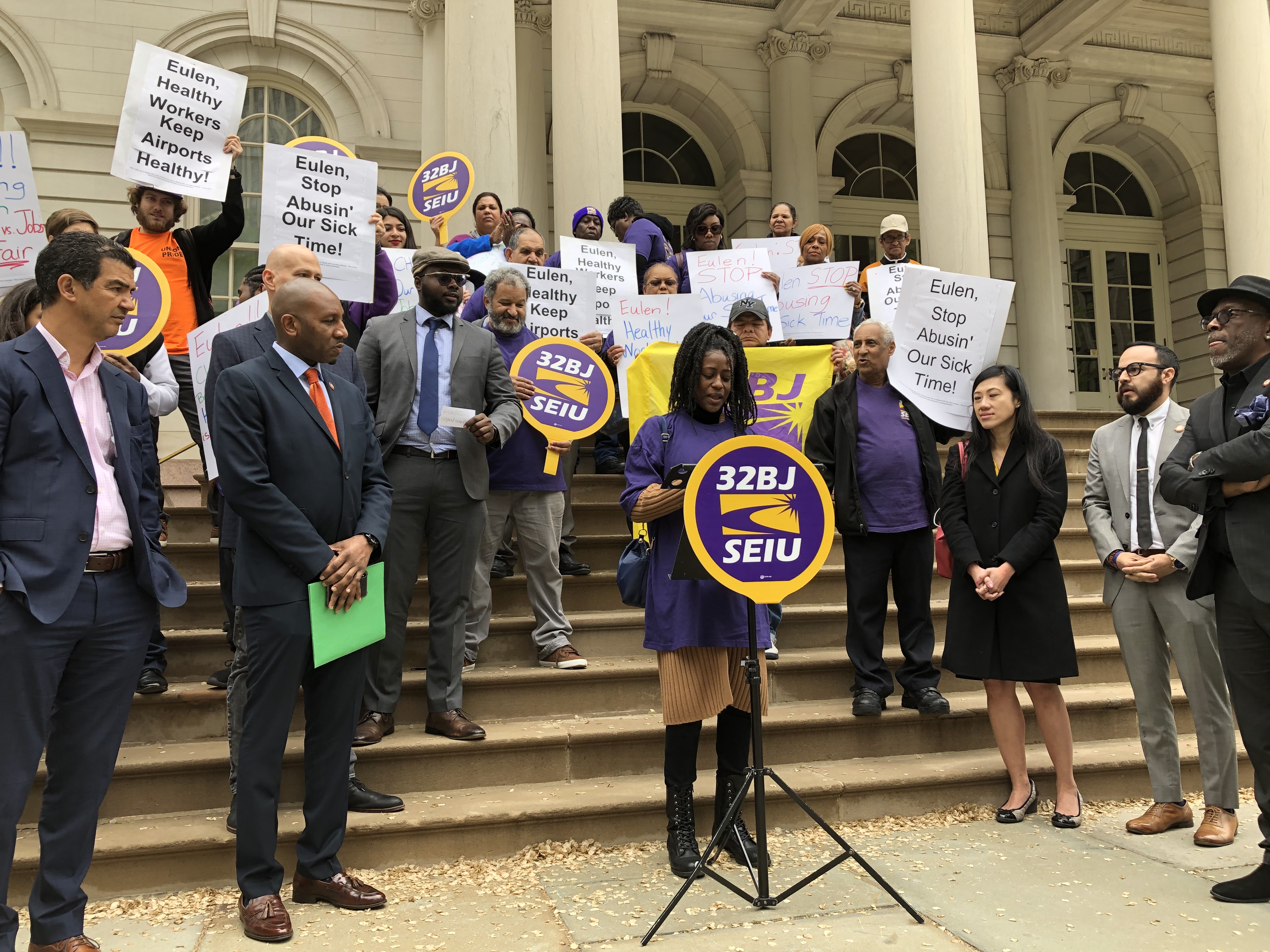 The Airport Workers were joined by their allies, community activists and elected officials, including Council Members Rafael Espinal, Jr., Donovan Richards, Keith Powers and Francisco Moya, and Sherry Leiwant, Co-Founder and Co-President of A Better Balance, among others.

In March, Eulen told the Workers they would have to use up all their Paid Sick Leave Time in March that they accrued in 2018, although New York City’s Earned Safe and Sick Time Act (Paid Safe and Sick Leave Law) allows Employees to carry over up to 40 hours of unused Sick Leave over to the next calendar year.

To add insult to injury, Eulen managers even put up a sign by the time clock to remind Workers to use up the time.

“We were badly understaffed because Workers were forced to use up their paid sick leave,” JFK, Eulen passenger verification agent Whitney Moore said. “Those of us working our shifts had to do everything, whether it’s in our job description, or not.  For instance, we did not have enough Workers to push wheelchairs so managers, on a daily basis, asked my Co-Workers to push two wheelchairs at the same time because we were severely shorthanded.  It ended up being a disservice to passengers and Workers alike.”

“Now, as I understand it,” JFK, Eulen Bag Runner Levelle Lindsey said, “the law is supposed to make it easier for Workers like me to take sick leave when we need it, not when it’s convenient for our employer to have us use the time.  The consequence, beyond the immediate chaos it created for passengers at the airport and in our lives, is that we no longer have the accrued time that we carried over from last year to use when, God forbid, we should need it.  We have to wait to accrue more Paid Sick Leave Time or go unpaid if we needed time to care for ourselves or family members.”

The law also gives covered Workers the right to use sick leave to care for themselves or a family member and to seek legal and social services assistance or take other safety measures if the Employee or a family member may be the victim of any act or threat of domestic violence or unwanted sexual contact, stalking or human trafficking.

“Eulen America undermined the very purpose of sick leave by allegedly forcing Workers to spend it at the contractor’s discretion, rather than when those Workers actually needed it. Thankfully there are laws to protect against this type of workplace abuse and I stand with 32BJ in ensuring that these Workers’ claims are heard fairly and violations are met with justice,” U.S. Representative Gregory W. Meeks (Democrat-New York) said.

Just last year, he said, Workers won the largest mandated minimum wage in the Nation, up to $19 an hour by 2023.

“At our airports, there are still pockets where a few employers feel that they can stifle the aspirations of Workers fighting for dignity in their workplaces and fighting for economic justice,” Hill said. “As they are showing with their complaints to the city, Eulen Workers are not going to take these abuses lying down.”

To Read This Labor News Report In Its Entirety, Go To: http://laborpress.org/jfk-airport-workers-protest-eulen-americas-abuse-of-paid-sick-leave-law/