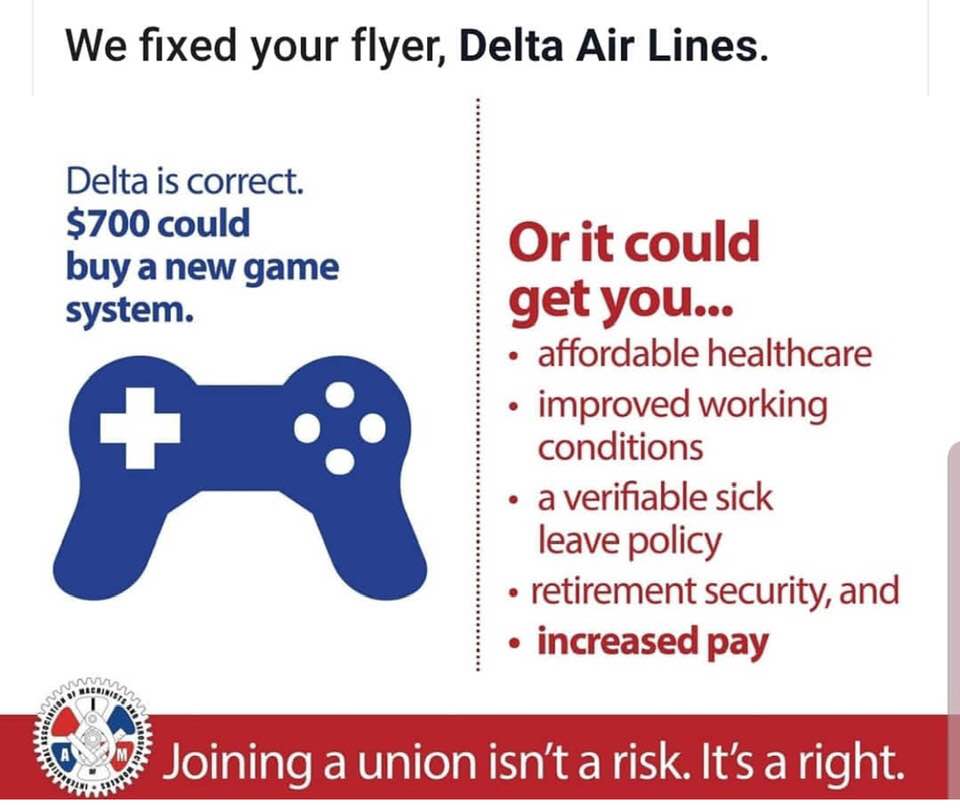 Delta Air Lines is the least Unionized airline based in the U.S., but the company’s efforts to maintain that status quo has created a stir on Social Media.

The Airline’s Flight Attendants last rejected Unionization in late 2010, following the 2008 acquisition of Northwest Airlines, and the company now operates a website that aims to sway Employees against efforts to Unionize. 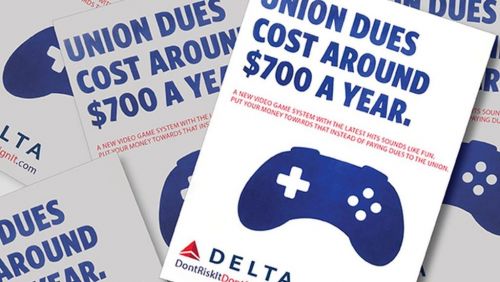 Recently, a handful of flyers produced by the airline have gone viral.

Most notable is one that states: “Union dues cost around $700 a year.  A new video game system with the latest hits sounds like fun.  Put your money towards that instead of paying dues to the union.”

That’s led some to complain about Delta’s tone on the issue.

We asked Delta for more information and learned the flyer was posted about a year ago, though it just now seems to have caught fire on Social Media.

More broadly, there’s a long history of contentious relations between Labor and management in the airline industry.

Earlier this year, for example, some voiced concerns after United and Bombardier introduced an entirely new regional aircraft.  The 50-seat plane, they alleged, was a workaround to a scope clause in United’s contract with the Air Line Pilots Association (ALPA).

As for Delta, it confirmed the authenticity of the posters to The Points Guys.

“The direct relationship we have with our Employees is at the very core of our strong culture and it has enabled continuous investments in Delta people,” the airline said in response. “Our Employees have the best total compensation in the industry, including the most lucrative profit sharing program in the world.  They want and deserve the facts and we respect our Employees’ right to decide if a Union is right for them.  Delta has shared many communications, which on the whole make clear that deciding whether or not to Unionize should not be taken lightly.”

That includes Endeavor Air, a wholly-owned subsidiary of Delta Air Lines that operates the world’s largest fleet of CRJ-900 aircraft.  If you’ve flown a Delta Connection flight recently, chances are high that is was operated by Endeavor.

While Delta’s Flight Attendants are not Unionized, those at its regional affiliates like Endeavor are.

Nelson provided The Points Guys with the following comment when asked about the Delta posters that have recently come to light: “In our highly Unionized industry, I’ve come to learn just how true it is that Unions are the only reason we have any protections at work or any ability to claim good jobs.  And management doesn’t like that.  In fact, Delta spent $38 million in less than a year to bash the Union the last time Flight Attendants voted to try to gain Union Representation.”

She continued: “During the Northwest bankruptcy, management told Flight Attendants to save money by looking for things in the trash, while executives took millions in ‘key Employee’ bonuses.  Many of those same people are running Delta today.  Union-Busting is a multi-billion-dollar business because it keeps labor costs low and allocates all of the control to a few in power.”

To Read This Labor News Report In Its Entirety, Go To: https://thepointsguy.com/news/deltas-anti-union-campaign-goes-viral/?utm_term=Editorial&utm_source=facebook&utm_campaign=facebook&utm_content=59259D5E-736D-11E9-B891-218AC28169F1&utm_medium=social&fbclid=IwAR0uZO3bom0dWQc3JB1B3dmCC-e5S1rqWPPxgoQKFDxxROesV-Vle9K6_WY