Amid Scrutiny Over 737 Max, Boeing To Replace 900 Inspectors & The Union Representing Those Workers Is Not Happy 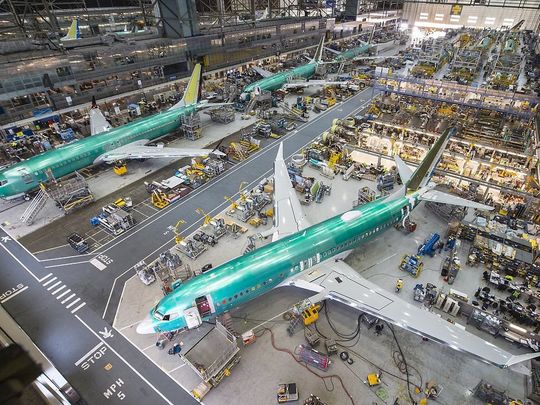 (SEATTLE, WASHINGTON) - While still dealing with the aftermath of crashes involving its 737 Max Jet, Boeing has decided to cut Inspector jobs - pushing ahead on a plan to cut about 900 Inspectors, replacing their jobs with technology improvements at its Seattle area factories, despite being under fire for software flaws in the 737 Max and quality issues in its other aircraft.

However, in its newsletter to Members, the Union representing those Workers - International Association of Machinists and Aerospace Workers (IAMAW) Local 751, has raised an outcry, calling it a "bad decision" that will "eliminate the second set of eyes on thousands of work packages."

Some 451 Inspectors will be transferred to other jobs this year and about the same number next year, out of a total of about 3,000 at its Commercial Aircraft Operations in the Seattle area, the IAMAW has told its Members.

Boeing, which confirms the plan but won't disclose the number of Workers involved, said the changes will result in better overall quality.

The Aerospace Giant is still facing fallout from the crashes of two 737 Max Jetliners - a Lion Air flight in October, killing all 189 aboard, and an Ethiopian Airlines jet in March, which claimed 157 lives.

An automated system designed to make the Max feel like previous generations of the 737 by holding down the plane's nose appears to have factored in both crashes.

The jet has been grounded worldwide while Boeing rewrites and certifies the software that runs the system.

Boeing has estimated the debacle will cost it at least $1 billion.

Damage to Boeing's reputation could be even worse and it hasn't been limited to the Max.

The New York Times published an exposé last month that alleged shoddy work and weak oversight at Boeing's plant in South Carolina, which makes the 787 Jetliner.

The Air Force has twice halted deliveries of the KC-46 Mid-Air Refueling Tanker, based on the 767 Airliner, after finding manufacturing debris onboard.

But when it comes to paring its Inspection Staff on the West Coast, Boeing says the "QA Transformation Plan" won't undermine safety.

Substituting technology gains, it says, will increase quality and effect only "stable" procedures, those in which there is a low probability of mistakes.

For instance, Boeing says when it is bringing out a new aircraft with wings made out of composites, there is equipment now that can do the inspections more thoroughly than humans.

Once the inspection equipment has verified that it can do the job - with humans overseeing the process - traditional Inspectors can be redeployed to other tasks.

So far, the Federal Aviation Administration (FAA) hasn't given the plan a ringing endorsement.

To Continue Reading This Labor News Report, Go To: www.usatoday.com/story/news/nation/2019/05/06/boeing-inspection-job-tech-crashes-outcry-737-max-poor-quality/3650026002/?fbclid=IwAR1aOCsEqshWEKT97YEw13so9szjx3ibDCNkj0qX3HARqOEpr9yIr_OfRjY