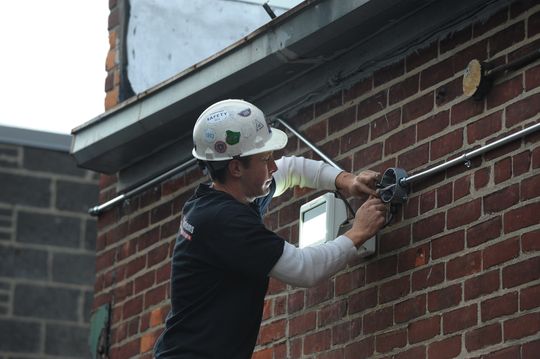 Detroit News’ Editor’s Note: This Labor Perspective is authored by, Tom Eastwood - the Business Manager at International Brotherhood of Electrical Workers (IBEW) 665; Ryan Husse - the Business Manager at IBEW 252;  Megan Doherty, the President of F.D. Hayes Electric; and Jason Kreger, the President of Aladdin Electric.  It can be directly accessed at: www.detroitnews.com/story/opinion/2019/05/02/opinion-citizens-want-union-electricians-government-construction/3630079002/?fbclid=IwAR1odO6toX0bqaWkGA7AmVwGZgFo5vv41HdWdCWkJPE91uUvz0e1F_wJw7I

Think about the last time you purchased a car.

Did you go out and automatically buy the cheapest thing on the market?

Probably not, because driving is inherently a dangerous activity so you likely considered safety features in making your decision.

A car is also an expensive purchase so perhaps you researched the vehicle’s reliability in order to protect your investment.

All in all, you probably paid a bit more to ensure that your family would be as safe as possible and that you wouldn’t constantly be dealing with repairs.

Choosing an Electrical Contractor for a construction project should be no different.

Electrical work is inherently dangerous and not all Electrical Contractors are alike.

Neither of those things is true.

The International Brotherhood of Electrical Workers (IBEW) Locals 665 and 252, along with the National Electrical Contractors Association (NECA) Michigan Chapter, recently commissioned a scientific survey of 400 Michigan residents in six counties.

The survey showed 86% of residents want officials to consider factors like safety training and quality instead of simply going with the cheapest bid.

Further, 66% said they prefer local officials hire Union Electricians specifically for work on school and government buildings, even if it costs more.

Factors such as safety training and quality are critically important when it comes to electrical work because faulty electrical systems cause nearly 40,000 residential and commercial fires every year, with hundreds of deaths, thousands of injuries and nearly $10 billion in damages, according to data from the U.S. Fire Administration.

Indeed, there have been many examples throughout Michigan over the years of faulty wiring causing harm.

Safety and quality issues can be avoided if local officials ask more questions of those they hire to do dangerous electrical work on their facilities.

Some Non-Union contractors say there is no difference between Union and Non-Union Electricians, but that’s false.

The fact is, the Union Apprentice Program guarantees Apprentices successfully complete more than 40 hours of safety training, including 30 hours of Federally-approved training, just within the first year of Apprenticeship.

If a Non-Union contractor doesn’t participate in a registered Apprenticeship Program, they can’t make that guarantee.

Critical factors that survey respondents believe should be considered by local officials when hiring Electrical Contractors include whether they guarantee equal pay for women and minorities (80%); The amount of safety training and on-the-job supervision Apprentices receive (78%); and That they provide good wages, health care and retirement benefits to Employees (77%).

It is clear taxpayers want public officials to hire licensed, responsible Union Contractors instead of outsourcing projects to the cheapest bidder.

We hope this survey is a wake-up call for our local officials to prioritize safety and quality over the bottom line - just like we do with our cars.