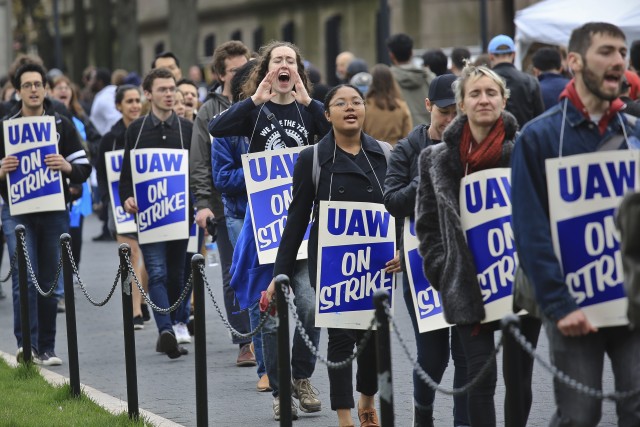 On May 4ath, 1886, thousands of Workers rallied together in Chicago’s Haymarket Square to campaign for an eight-hour workday - initiating a tradition of protest for some of the most basic human rights.  That was formalized on May 1st, 1890, when the first International Workers’ Day was celebrated around the world.

In the 133 years since, Workers and their Unions have continued to fight for their rights - winning fights 80 years ago to establish the Federal Minimum Wage, secure Collective Bargaining Rights, and even raising wages for Non-Union Workers by setting industry-wide standards.  And during the mid-20th century when Union Density was its strongest, Unions reduced overall inequality.

But that was then.

In the decades since, Collective Bargaining Rights have been under unending attack and it is no accident that Union Density in the United States has declined to near single digits.

Up to 87% of private sector employers fight their Employees’ efforts to Unionize, sometimes spending hundreds of thousands of dollars to pay “Union Avoidance Consultants” to bust the Organizing Drives.

In the last year, however, American Workers have loudly and clearly said: “Enough!”

Teachers, Musicians, Actors, Hotel Workers, Grocery Store Employees and many others have gone on Strike - the most Workers to have walked off the job than in any year since 1986.

Crucially, these Strikers won most of their key demands.

Indeed, Millennials’ positive attitude toward Unions is driving much of the new wave of organizing.

According to Gallup, support for Labor Unions is at a 15-year high, with 65% of Workers under 35 approving of Labor Unions.

Many of these young people graduated from high school and college in the wake of the Great Recession and the slowest economic recovery of the post-World War II Era.

Years of high unemployment and underemployment, low wages, mountains of student debt and the most expensive health care system among developed countries have helped create a generation of Workers who support progressive policies over unfettered capitalism.

But faced with governmental inaction on many of the issues that most affect their lives, Millennials have decided to take action themselves and organize their workplaces.

On average, Union Members earn almost 20% higher wages than their Non-Union counterparts, and in certain occupations such as High School Teachers, Registered Nurses, Aerospace Engineers and Broadcast Technicians, the Union Premium can be even higher.

And new Union Members are able to negotiate for measures like guaranteed minimum salaries and annual pay raises to substantially raise pay over a short period of time.

To Continue Reading This Labor News Report, Go To: https://prospect.org/article/millennialization-american-labor