The Amalgamated Transit Union Mourns The Passing Of International President Larry Hanley, Who Started Out His Long Union Career As A Brooklyn Bus Driver

Published Thursday, May 9, 2019
by David Wildstein/NewJerseyGlobe.com 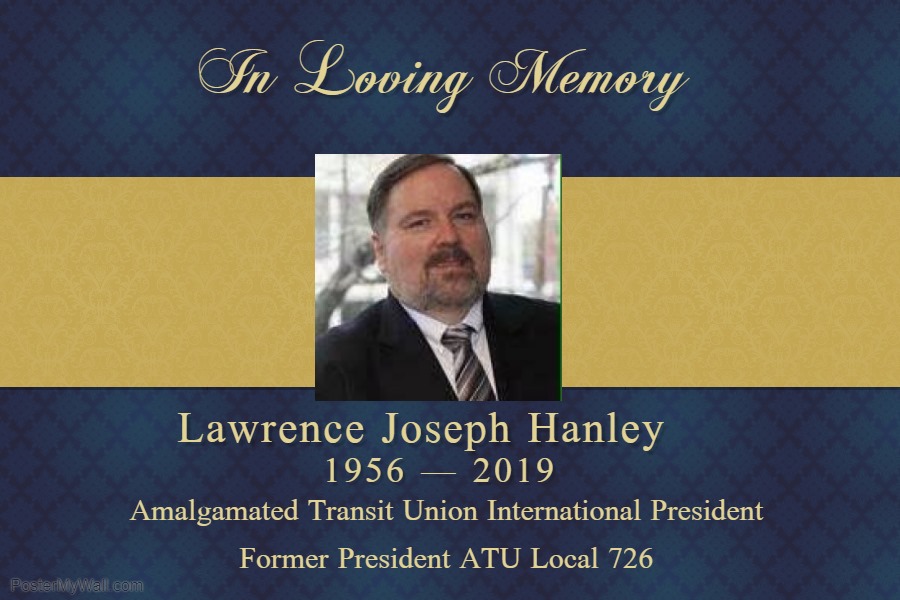 Lawrence J. Hanley, the International President of the Amalgamated Transit Union (ATU) and a longtime presence in New Jersey politics, has died.  He was 62.

“I am deeply saddened to hear about the untimely death of my dear friend and our ATU International President Larry Hanley,” said John Costa, ATU International Vice President.  “The ATU members of New Jersey, across the entire United States and Canada are in mourning and more importantly the Hanley family have lost a beloved patriarch.”

Hanley began his transit career as a Bus Driver in Brooklyn and was an activist in the 1980 New York Transit Strike.

He became Secretary-Treasurer of his Local in 1984 and was elected President in 1987.

“Larry showed what is possible for our Union and within each one of us - if we believe, dream, fight and work hard together,” Costa said.  “I am committed to honoring Larry’s legacy.  Let us continue each day to be inspired by his lifelong leadership.  Rest easy my friend, my mentor, our leader.  You will be missed.”

He was also a founder of the New York Working Families Party.

“My sympathies go out to his wife, Thelma, his daughter Monica and his son Lawrence Junior.  Larry served his country with pride when it came to the Labor Movement and Worker’s Rights,” Costa said. “He was a champion for all people and believed that everyone should have the chance to realize their fullest potential.”

To Directly Access This Labor News Story, Go To: https://newjerseyglobe.com/in-memoriam/larry-hanley-international-transit-union-president-dies-at-62/

And For More, Go To: www.atu.org/media/news/atu-mourns-passing-of-international-president-larry-hanley