Published Tuesday, May 7, 2019 11:00 am
by Rachel Silberstein/The Albany Times-Union 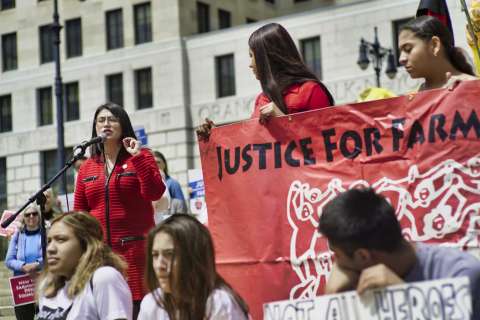 (ALBANY, NEW YORK) - Labor Unions and advocates rallied at the State Capitol in Albany on Monday (May 6th) to send a message to State Lawmakers to grant Collective Bargaining and Overtime Pay to New York's Agricultural Workers, who have long been excluded from the protections due to an 80-year-old Federal Law.

Labor groups have for years fought for the Farmworker Fair Labor Practices Act, currently sponsored in the state Senate by Queens Democrat Jessica Ramos.  The measure guarantees Worker Compensation Benefits and one day off a week, and requires employers pay overtime to Laborers who work more than 40 hours a week or eight hours a day.

Ramos, who hosted three hearings on the issue last month, said she met Farmers who offer competitive pay and benefits to their Workers, but also heard many stories of abuse.

"There is ‘no reason’ that in 2019, in a $5 billion dollar industry - that is, the agricultural industry – ‘that if you work sixty-to-seventy hours a week, you should be living in poverty,’" she said.

The Bill has been in the Legislature for two decades, but never came up for a vote in the Senate during all but two years of Republican control.

With Democrats seizing the house in January, the Bill has garnered majority support from both chambers and is backed by Governor Andrew Cuomo.

Ramos vowed to deliver the Bill to the governor's desk before the end of session, declaring it "a new day in the state Senate."

Patricia Smith, Senior Counsel at the National Employment Law Project and a former New York State Labor Commissioner, in a statement said there was "ugly racial history" behind the exclusion of New York's largely minority Agricultural Workforce: "New York ‘must seize the chance to right this wrong and extend Organizing Rights and Overtime Pay Protections to Farm Workers."

Federal Law gives States the power to extend Collective Bargaining Rights to Farm Workers, and 10 States have already done so, while four have created Overtime Pay Regulations for agriculture.

The New York Farm Bureau has criticized the Bill, noting that other States have more predictable climates and can harvest all year, while New York Farmers have a limited harvest window.  The right to Strike could put the agricultural industry in jeopardy, due to the seasonal nature of the business, said Farm Bureau spokesman Steve Ammerman.

To Read This Labor News Story In Its Entirety, Go To: www.timesunion.com/news/article/Farmworkers-rally-for-labor-rights-at-Capitol-13822180.php