Published Tuesday, May 7, 2019
by Steve Wishnia/LaborPress.org 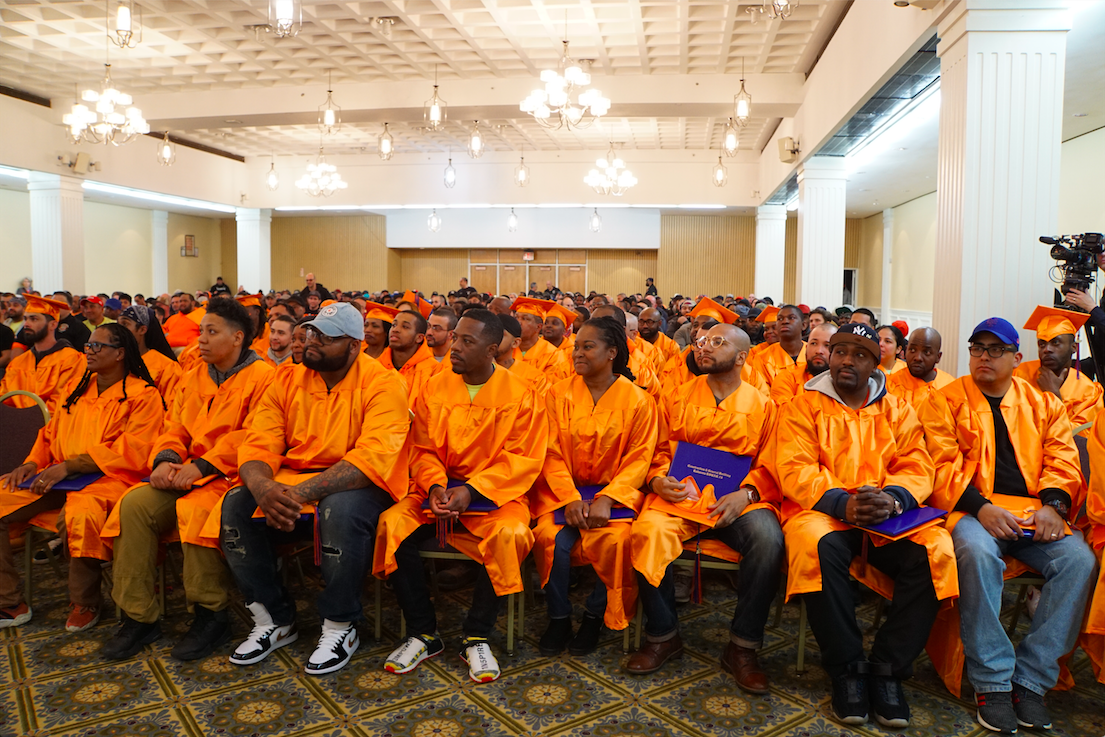 (NEW YORK CITY) - The about 60 Laborers International Union Apprentices lined up in a side room at St. Vartan Armenian Cathedral in Manhattan in mid-April, clad in brilliant saffron-orange caps and gowns.

“When you graduate, you’re part of this forever,” Local 79 Apprentice Coordinator Timmy Valentine told them.

They marched into the cathedral’s main room, chanting: “Who are we? Seventy-nine!”

They hugged and slapped palms with friends and family members to applause and whistles, as Local 79 Business Manager Mike Prohaska hummed a few bars of “Pomp and Circumstance.”

“Be ‘very nice to them, because someday they’re going to be funding your pension,’” Prohaska quipped to the hundreds of members in attendance. “Teach them ‘everything you know.’”

The room quieted as Prohaska read the oath of ascension to Journeyman status, a pledge to be active in the Union and “to fight for all Working Men and Women in the United States and Canada.”

“I do,” the graduates chorused.

Introducing the commencement speaker, Public Advocate Jumaane Williams, Prohaska praised him for his work last year getting the City Council to pass the Construction Safety Training Act, a Bill to expand the amount of safety training required for Workers on construction projects in the city.

“Just because we build this city ‘doesn’t mean people have to die,’” Williams said.

He noted that the 111 new Journeymen had completed 400 hours of classes and almost 4,000 hours on the job over three years or more.

“In particular, I’m ‘thankful to see so many women graduating,’” he said. “We ‘all know how important it is to have Union Jobs on construction sites.’ “A ‘Union is not just a job, it’s a career.’”

One thing the city can do, he said, is to make sure that the affordable housing it builds is affordable to the people who build it.

He got a standing ovation when he said that if the city is giving subsidies or tax breaks to developers: “We ‘deserve’ Union Jobs.”

Prohaska made the same point in an Op-Ed article published in City Limits earlier in the day.

“My vision is one where developers put Bronx residents to work - and help them pursue careers - building new housing they can afford to live in,” he wrote. “Here’s how to get it done: As developers seek city and state subsidies for new construction projects in the Bronx, they should be required to hire local residents and create Union Career-Path Jobs in construction.”

Without expanding Union Construction Careers, he said, residents, especially Immigrants and People of Color, will be “vulnerable to poverty wages, economic stagnation, and exploitation whenever they work on unregulated construction sites.”

As the Apprentices prepared for their procession, Warrington pointed out a woman who’d gone through the program as a mother of five children and who is now an Instructor.

“The thing that ‘I love’ as an instructor ‘is watching the success stories,’” Christine Culpepper, another Instructor, told LaborPress.

To Directly Access This Labor News Story, Go To: http://laborpress.org/laborers-graduate-apprentices-urge-union-built-affordable-housing/