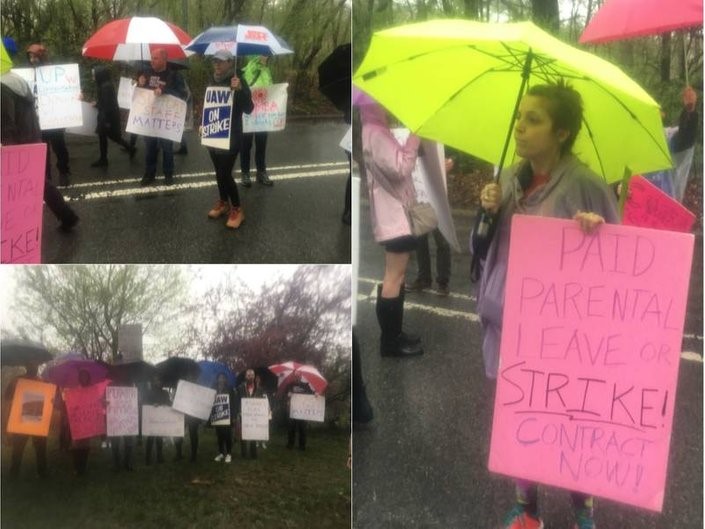 (NEW YORK CITY) - Runners who recently gathered in Prospect Park to raise funds for a Brooklyn non-profit were met by a horde of Striking Employees who claim their CEO earns $500,000 a year while Workers are forced to go on food stamps during parental leave.

CAMBA Legal Services Staff have been on Strike since for a little more than two week now after the non-profit, which provides free legal services for roughly 45,000 low-income New Yorkers with cases in housing court annually, refused to increase salary and provide paid leave for all new parents during contract negotiations, the Workers said.

The current contract only provides maternity leave coverage to birth mothers - not fathers, adoptive parents or step-parents - who are granted 13 weeks leave at 70% of the their usual salary, the Workers also said.

Dafina Oruqi, a full-time CAMBA Employee, said she had to go on food stamps after she gave birth to her first child, suffered from post-partum hemorrhage and lost 1.5 liters of blood.  "The doctors thought that ‘I was going to die,’" Oruqi said. "I ‘had no choice but to apply for Food Stamps to support my family.’  ‘In addition, it was a struggle to pay my rent.’"

The Unionized Workers have spent six months hoping to augment the non-profit's compensation package, which they argue is responsible for a "revolving door for attorneys."  Nearly 25% of CAMBA attorneys have left the non-profit because of problems with their paychecks and their benefits, the Workers said.

"Dozens have left during my time here," said Paola Rodriguez, a Law Graduate at the Flatbush office. "They ‘all had to leave for the same reasons: lack of competitive pay, lack of benefits, lack of care for their work-life balance and poor training.’"

CAMBA spent $82 million on compensation for its 3,172 Employees, which makes for an average annual salary of about $26,000 in 2017, according to tax documents filed to the Internal Revenue Service (IRS) in 2018.

Idalia Bisbal, a Case Aide at the Staten Island Office, said she's striking because her salary has stagnated for six years with CAMBA: "My salary ‘has not kept up with inflation, yet our CEO earns roughly twice as much as (New York State) Governor (Andrew) Cuomo.’"

To Continue Reading This Labor News Story, Go To: https://patch.com/new-york/brownsville/nonprofit-ceo-makes-600k-staff-relies-food-stamps-workers