The VA Attacks Its Own Workforce: The American Federation Of Government Employees Reject Management Proposal That Guts Union Contract 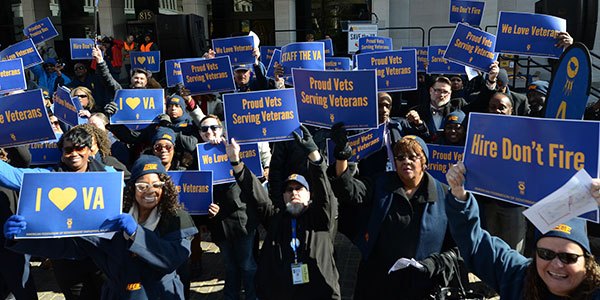 (WASHINGTON, D.C.) - The American Federation of Government Employees (AFGE) is denouncing a proposal from Veterans Affairs (VA) Secretary Robert Wilkie that would eviscerate the existing Labor Contract covering 250,000 Employees in the Department of Veterans Affairs and strip Workers of their rights and protections.

“Secretary Wilkie is ‘making a mockery of the collective bargaining process to do the bidding of President (Donald) Trump,’” AFGE National President J. David Cox Sr. said. “This is all part of the Trump Administration’s ‘strategy to force the VA to fail, thereby paving the road to privatization.’”

The sham proposal, which the VA submitted to AFGE’s National VA Council late last week, deletes entirely or in part 42 articles in the existing contract.  Provisions were removed covering critical issues such as Employee training, workplace health and safety, and protection from whistleblower retaliation.

“As a veteran myself, ‘it makes me sick to see how little regard this administration shows to the Workers who serve our veterans day in and day out,’” said AFGE District 3 National Vice President Phil Glover, who chairs the AFGE National Executive Council’s Veterans Committee. “VA Employees ‘deserve to be treated with the same respect we expect them to show the veterans they serve.’”

More than one-third of VA’s Employees are veterans themselves, which allows them to provide veterans with the specialized care they need, AFGE Officials said.

VA Employees have pioneered groundbreaking treatments for traumatic brain injury, spinal cord injuries, post-traumatic stress, and other ailments that are far more common among veterans than the general population, they said.

Yet, the Trump Administration is attacking the women and men who provide that care - stripping away their rights, funneling resources to the for-profit private sector, and failing to fill 49,000 vacancies across the department nationwide, Union Officials said.

“Despite the attacks from this administration, the VA ‘continues to offer the highest level of care for our Nation’s veterans, and we are improving every day,’” VA Council President Alma Lee said. “There is ‘no justification’ for the administration’s proposal, ‘which would gut our contract and make it more difficult for veterans to get the quality service they expect and deserve.’”

The AFGE is the largest Federal Employee Union, representing 700,000 Workers employed in the Federal Government and the government of the District of Columbia.

To Directly Access This Labor News Report, Go To: www.afge.org/publication/va-attacks-own-workforce/?fbclid=IwAR31zHxqfSNS5SXNLe_MT3WwHAAZ-WiVUfwLEcM-60wImla9N_SHV1jwIfc