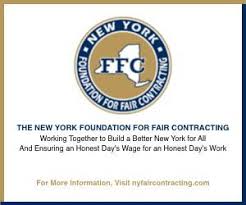 (BUFFALO, NEW YORK) - The New York Foundation for Fair Contracting (NYFFC) is applauding a decision made by the Erie County Legislature to table a vote last week before its Economic Development Committee on awarding a local reconstruction project contract to Zoladz Construction of Alden, New York.

The NYFFC - a Non-Profit Fair Contracting Organization committed to leveling the playing field in public works construction, filed a bid protest with Erie County questioning the responsibility of Zoladz Construction.

In addition, the NFCC also pointed to Zoladz Construction’s troubling safety record.  In the past three years, two Workers lost their lives in Zoladz workplace accidents.  In a case that just closed in April (2019), The U.S. Occupational Safety & Health Administration (OSHA) fined Zoladz over $40,000 for serious violations in relation to the 2018 fatality.  OSHA considers a violation to be serious “when the workplace hazard could cause an accident or illness that would most likely result in death or serious physical harm.”

In light of Zoladz Construction’s recent history, the NYFFC considers the contractor an irresponsible contractor.

Both State and County Law permits the County to award public contracts to the lowest responsible bidder.

The NYFFC has urged Erie County to find Zoladz Construction an irresponsible contractor and to award the Lake Avenue Reconstruction Project in Hamburg to the next lowest, responsible bidder.

For More Information On This Labor News Report, Go To: https://nyfaircontracting.org/lakeave/