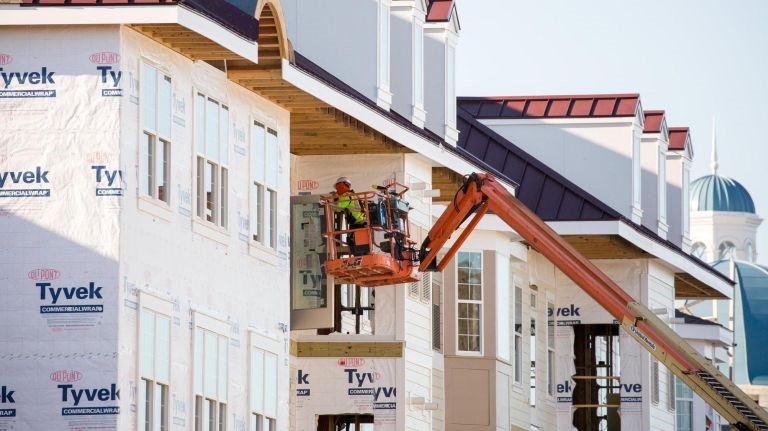 (ALBANY, NEW YORK) - A fight is brewing in the State Capitol over whether Construction Workers should be paid Union Wages and Benefits on building projects that receive tax breaks.

Contractors and real estate developers say the projects will be too costly if they are forced to pay the higher rate, known as the Prevailing Wage.

“Should the current pending Prevailing Wage Legislation pass, it appears likely that we will be forced to move our company to another state where we can afford to continue to develop projects and employ our workforce,” Robert and James Coughlan, owners of Tritec Real Estate Company Incorporated, one of Long Island’s largest developers, said in a letter to State Leaders.

Unions say developers should be forced to pay the Prevailing Wage on projects that win taxpayer aid from New York State or Local Governments.

The outcome of the battle will impact the earnings of the 71,800 Construction Workers living on the Island.

The Prevailing Wage varies by job and by county and is set by the State Department of Labor.

In Nassau and Suffolk Counties, a Carpenter on a Prevailing Wage Project earns $84.50 per hour ($38.60 in wages and $45.90 in benefit contributions), on average, compared with an average of $38.40 per hour ($30.70 in wages and $7.70 in benefits) on other projects, according to a 2018 study by Farmingdale State College's Business and Economics Research Center.

Under current New York State Law - the Prevailing Wage must be paid to all Workers, Union and Non-Union, on Government-Funded Public Works Projects such as roads, mass transit and public schools, but it is not required for those employed on private construction projects aided by government.

Now Albany Lawmakers are considering legislation that would extend the wage requirement to include construction projects - from housing and retail developments near Long Island Rail Road stations to private company expansions - that receive tax breaks or grants from Industrial Development Agencies (IDAs) and State Agencies such as Empire State Development.

Developers say the proposal would increase the cost of IDA projects by as much as 40%, making them not worth pursuing and some have threatened to stop building if the Prevailing Wage is expanded.

This dire scenario helped to keep the proposal out of the recently-approved 2019-20 State Budget, considered the easier path to adoption, according to political experts.

However, the measure, in various forms, has bipartisan support and could clear the State Legislature before June 19th when its regular session ends.

“We want to create jobs and we want to make sure they are good jobs that pay a decent living, and that’s what the Prevailing Wage is all about," Governor Andrew M. Cuomo told Newsday. "We want to make sure we do that without impeding natural growth and without hurting economic development."

For Union Laborer Benjamin Carrasco, having the Prevailing Wage applied to IDA-supported construction would mean more work assignments.  With two children and a third expected any day, he said he would have money to set aside in case of emergency and could stop living paycheck to paycheck.  “The Prevailing Wage ‘gives us, Unions, a level playing field’” with lower-paid Non-Union Workers, said Carrasco, 43, who notes he usually works only 10 months each year. “It’s ‘not easy getting work.’"

To Continue Reading This Labor News Story, Go To: www.newsday.com/business/prevailing-wage-union-developer-battle-1.30567045