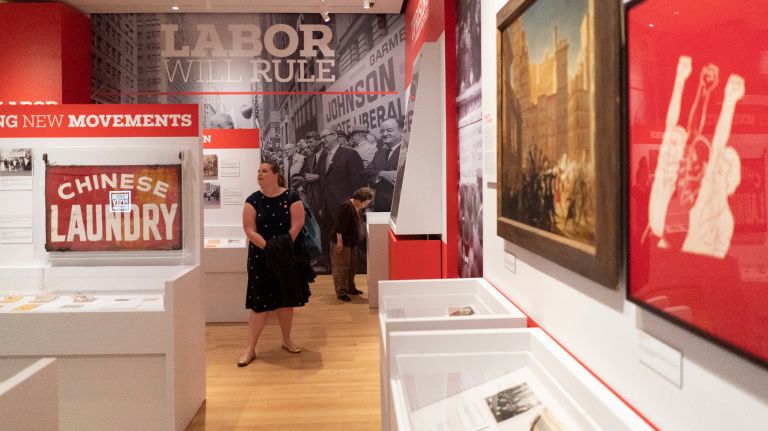 (NEW YORK CITY) - New York City has proudly worn the mantle of being a Union Town for well over a century, but the story of how it became a powerhouse in the Labor Movement is complex, a narrative shaped by bold actions and courage as well as backstabbing and internal conflicts.

City of Workers, City of Struggle: How Labor Movements Changed New York, which recently opened at the Museum of the City of New York, takes a look at the fight for Workers' Rights and its roots in 19th Century Industrialization up to the recent debate over Amazon’s halted plan to put a new headquarters in Queens.

The gallery is filled with artifacts: A deep red banner from the Knee Pants Makers’ Union; A sewing machine used by a Worker who participated in the 1982 Chinatown Strike by the Members of the International Ladies’ Garment Workers Union (ILGWU); and the rolodex of Albert Shanker, who led both the American Federation of Teachers (AFT) and the United Federation of Teachers (UFT), filled with the phone numbers of top political players.

“In New York, ‘you can be a Maintenance Worker in a residential building and live a good life,’” said Historian and Author Joshua Freeman, a City University of New York (CUNY) Professor. “You ‘have health insurance, a decent salary, your kid can go to college.’  ‘It’s Unions that have made that possible in the past and they continue to do that for so many Working People.’”

Curator Steven Jaffe said New York City’s status as a center of banking, industrialization and immigration - as well as its large population, helped make it fertile ground for the Labor Movement.  Immigrants also brought ideas from labor rebellions in Russia, Poland and Italy, he said and the growing number of Workers wanted better hours and pay.

But fractures in the movement appeared by the late 19th century.  Jaffe said one group was the Central Labor Union, which featured a more inclusive Socialist agenda.  Unlike other Unions, it did not exclude African-American or Chinese Workers.

The other group was the American Federation of Labor, headed by Samuel Gompers, a cigar-maker from New York.  “The AFL, ‘which does prevail, is a more conservative, more narrowly focused movement that gains real power,’” Jaffe said.

The tragic Triangle Shirtwaist Factory fire in 1911, in which 146 Garment Workers perished, was a turning point in Labor History.  Doors and stairwells to the Greenwich Village factory had been locked to prevent Workers from taking breaks.

Leaders of both Private and Public Unions enjoyed several decades of political influence, with their ability to deliver votes from Members, but the city’s fiscal crisis, a series of crippling Labor Strikes, a loss of manufacturing jobs and a Conservative National Agenda weakened their sway.

Jaffe also pointed to recent efforts to advocate for Workers not covered by Collective Bargaining Rules, such as Taxi Drivers, who are often new Immigrants.

“Through legal efforts, publicity and marches, these Workers ‘have become an important part of the Labor Movements in New York,’” he said.

Freeman said the impact of Unions can be found in many institutions, such as the CUNY System and in laws requiring Sick Leave and a Minimum Wage.

“Even ‘if it’s not through’ contracts, Unions ‘are still shaping the city in ways I think are really beneficial,’” he said.

To Directly Access This Labor News Report, Go To: www.amny.com/things-to-do/nyc-museum-labor-movement-1.30480008