Described As The 'Largest Gathering Of Teachers In History Of South Carolina - Protest In Columbia Draws 10,000 In A Sea Of Red As Educators Show Their Anger Over Pay 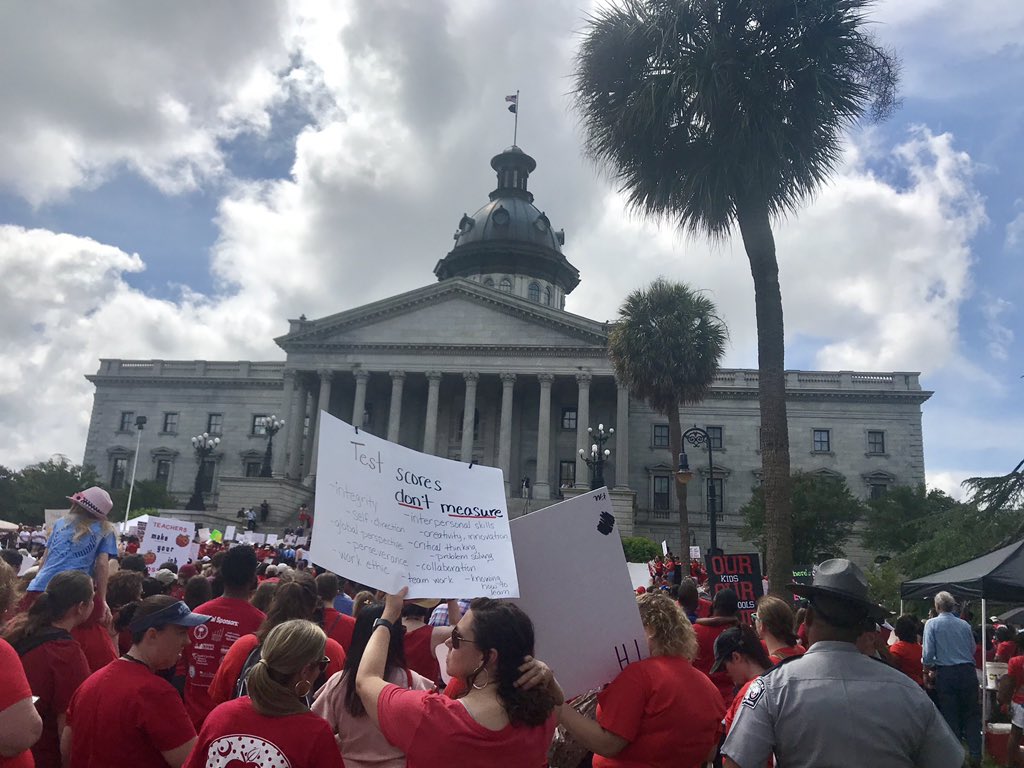 (COLUMBIA, SOUTH CAROLINA) - Greenville County Teacher Erica McCall was among about 10,000 Teachers and supporters wearing red and rallying at the Statehouse on Wednesday (May 1st) for more pay and better working conditions at an event organized by the network of Education Activists known as SC for Ed – which seeks to improve the educational system in South Carolina.

Created by educators, SC for Ed empowers Educators and supporters to advocate for education by interacting with stakeholders.  On its website, the group said it will fight to ensure that all decisions made in regards to education are in the best interest of our students, educators and communities.  It is SC for Ed’s hope, it continued, that you join us in the dialogue for change so desperately needed in South Carolina education.

McCall said she asked any Teacher who wanted to go but couldn't to send her their names.  She got so many names that she couldn’t fit them all in writing on her sign, she said.

In a message with a video posted on Twitter, the South Carolina Department of Public Safety estimated the crowd at 10,000.

State Senator Mike Fanning of Great Falls said: "This is the largest gathering of Teachers in the history of South Carolina."

Some of the protesters chanted: "Where's Molly?," then "Do your job!" as they approached the base of operations for South Carolina Legislators.

State Superintendent of Education Molly Spearman is serving as a Substitute Teacher, she's announced, after saying she can't support Teachers who are "walking out on their obligations" to the State's students.

Greenville County Schools experienced four times the typical number of absence requests Wednesday, according to District Spokeswoman Beth Brotherton.  "We currently have (145) personal leave requests for today, (19) were not filled by subs as of 7:30 a.m. which is not out of the ordinary and not unmanageable," Brotherton said.

The district employs about 5,000 Teachers.

About 200 Teachers across Greenville, Anderson and Pickens counties requested Wednesday off, officials said.

Schools in Lexington-Richland School District Five, Colleton County, Dorchester District Two and Chester County were scheduled to be closed due to the number of Teachers requesting personal leave, the districts announced by late Monday afternoon.

Teachers are expected to get at least a 4% pay raise, which doesn't meet the minimal goal of increasing the State's average Teacher salary to the Southeast average, organizers said in a call-to-action resolution posted on the SC for Ed Facebook page.

The starting salary for Teachers in South Carolina is currently $32,000.

To Directly Access This Labor News Story, Go To: https://amp.greenvilleonline.com/amp/3632975002?fbclid=IwAR0p6-Ry4joRzz0Y89I3n7J3fEOwKs0kajCFhhMVY_nlNEqkdUgxFNJ7DQ4

For More Information On SC For Ed, Visit: https://scfored.wixsite.com/hope?fbclid=IwAR1aE1YhTX5f-yvSjb4iNgbTjMm6nsApSE_dy7eYJPXUvRkOyE7Uck5oMP0