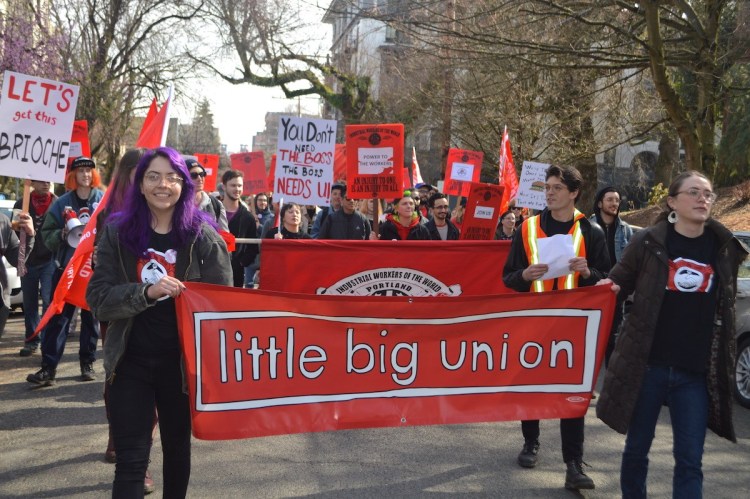 “We are asking them to ‘voluntarily recognize us, let us organize freely, and not Union bust,’” Little Big Burger Employee Ashley Reyes told the NW Labor Press.

The new Union, dubbed Little Big Union, is affiliated with the Industrial Workers of the World, the Labor Organization behind Burgerville Workers Union.

Little Big Burger serves a simple menu of small hamburgers, truffle fries and root beer floats “in a fun and hip atmosphere,” as the company website puts it.

The company was founded in 2010 by Portland Restauranteurs Micah Camden and Katie Poppe, the duo who later started Blue Star Donuts and Boxer Ramen.

They sold Little Big Burger in 2015 for $6.1 million to Chanticleer Holdings, Incorporated, the North Carolina-based company that owns Hooters.

But by then, a group of Little Big Burger Employees had filed a Class Action Lawsuit against the company over unpaid overtime.

The lead plaintiff in the lawsuit said Little Big Burger fired him for complaining about the unpaid overtime and for suggesting to Co-Workers that they take action to get paid.

Using funds Chanticleer had set aside out of the purchase price, Camden and Poppe settled the lawsuit in February 2016 for $675,000, including $225,000 for attorney fees.

Today Little Big Burger has 20 locations - 12 in the Portland Metro Area, one each in Eugene and Austin, and three each in Seattle and North Carolina.

Reyes, 23, said she gets Minimum Wage and no benefits after 17 months working at Little Big Burger, but she and her Co-Workers have already seen collective action get results, adding that she and her fellow Workers signed a petition asking for safety slip mats and got immediate agreement from Little Big Burger management.

They also want an end to at-will employment, the right to refuse service to abusive customers, a commitment to fix or replace tools and machinery in a timely manner, and a commitment to not use E-verify check Workers’ documentation status.

To Read This Labor News Story In Its Entirety, Go To: https://nwlaborpress.org/2019/03/fast-food-workers-announce-union-at-little-big-burger-chain/