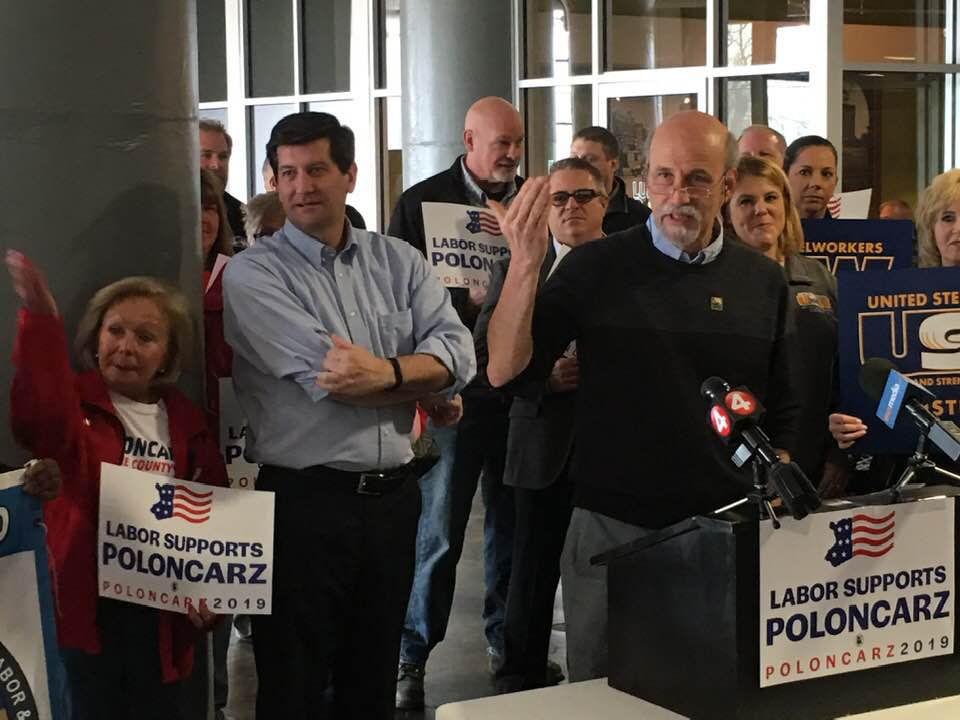 WNYALF President Richard Lipsitz was joined by a great number of area Labor Leaders and Representatives in the lobby of the Tri-Main Center in Buffalo where the WNYALF is headquartered to make the announcement:

The Western New York Area Labor Federation is proud to endorse Mark Poloncarz for re-election as Erie County Executive in 2019.

The economy of our county is in better shape than it has been in decades.

There is lower unemployment and wages are up.

Furthermore, the population is growing again after 50 years of stagnation.

Much of this growth is due to the policies of County Executive Poloncarz.

Our organization is also very impressed with the policies in place at the Erie County Industrial Development Agency, implemented in the past seven plus years.

Mark is a fighter against bigotry and discrimination, stands we consider essential if our society is to become united.

Finally, Mark has spearheaded real reforms in county bidding procedures that provide high quality building projects, which promote real opportunities for young workers and workers of color through the use of state approved apprenticeship programs.

For all these reasons and more, Mark Poloncarz deserves another term as Erie County Executive.

Among those in attendance were Union Leaders and Representatives from the Buffalo Building & Construction Trades Council (including the Carpenters, Electrical Workers, Laborers and Painters), the Communications Workers of America (CWA), the Service Employees International Union (SEIU) and the United Steelworkers (USW). 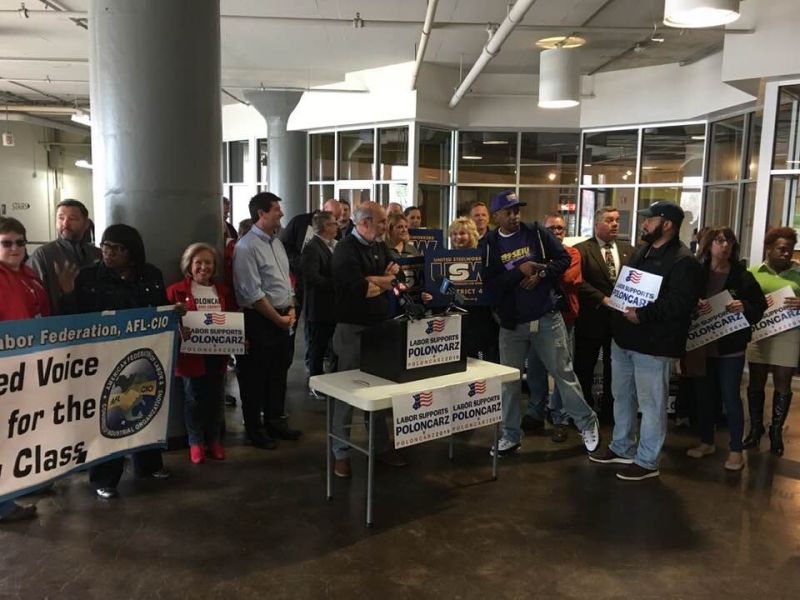 Buffalo AFL-CIO Central Labor Council President John Mudie, who also serves as President of CWA Local 1122, spoke at the endorsement news conference, saying of Poloncarz: “He supports (Organized Labor).  He has ‘settled most, if not most,’ county contracts.  ‘We may not always agree, but he has provided Labor with a seat at the table and given us the opportunity to talk.’”

Also speaking at the endorsement news conference was Deb Hayes, who serves as Upstate New York Director for the CWA.  Hayes talked about Poloncarz personally involving himself in continuous area Labor actions, including walking the picket line and attending Labor’s rallies and news conferences: “He ‘wasted no time going to bat for the Workers at New Era Cap Company’ (who lost their local jobs when the company recently moved its Union operation in nearby Derby to a Non-Union plant in Miami, Florida).  He worked ‘behind-the-scenes’ to ‘help keep those jobs here in Western New York, even though we worked to undo that decision.’  It ‘reinforces what we already know about Mark Poloncarz that over his last two terms – if it is a struggle, if (Labor) needs assistance, Mark Poloncarz will be there.’”

Poloncarz, a Democrat, said: “I want to thank Labor for the support and for (initially) ‘putting their faith in me in 2011 and for allowing me to move forward.’  ‘By changing some things like the ECIDA (Erie County Industrial Development Agency), we have been able to create (10,000) construction jobs and (3,000) permanent jobs that carry with them (a $21.50 an hour) wage and a yearly salary of ($45,000) - not by moving business away, but by growing it, by doing what was right for our community.’”

“We are ‘fighting for the men and women of America against those would put profits over people, by losing great-paying jobs.’  We’ve been ‘able to find solutions to the problems that are equitable and that benefit all.’  ‘We’ll look to make sure there is pay equity between women and men and if companies that pledge to create jobs (in return for county tax abatements and incentives) don’t create them, we’ll take our money back.’  ‘We will take nothing for granted and work harder to make good things happen in our county.’  ‘The best is yet to come,’” he said.

A representative of the USW also told WNYLaborToday.com at the news event that his Union had also endorsed Poloncarz in his re-election bid.