(BUFFALO, NEW YORK) – While Communications Workers of America (CWA) National President Chris Shelton delivered a fiery speech at the 2019 Western New York AFL-CIO Area Labor Federation’s (WNYALF) aimed at motivating Unionists to get involved to unseat Republican President Donald Trump in 2020, it was a young Unionist who was singled out for his contributions to local Labor who made an impassioned plea to Working People not to quit or give up on convincing those in the Union Movement who voted for Trump in 2016 otherwise.

“We are ‘under the rule of a tyrant (Trump) and it is up to us’ - Workers, revolutionists, ‘to defeat him at the ballot.’  ‘Tweet by tweet,’ Trump has ‘already built that wall’ by ‘getting us to fight against other’ - ‘but we are ‘Union Strong.’  We ‘never quit.’  ‘And we can’t quit on the (43%) of Union Households who voted for Trump,’” said American Federation of State, County & Municipal Employees (AFSCME) Local 650 President Rick Bartolotta.

Bartolotta was presented with the Flo Tripi Activist of the Year Award, named after the late Civil Service Employees Association Region (CSEA) Six President, who was deeply respected and loved for her devotion to her Statewide Public Employees Union, her Members and the Labor Movement across Western New York.  Tripi passed away in July 2018.

“There is ‘one word that (describes) Labor: Unity.’  ‘It brought us victory with ‘No Con Con’ (The Labor-led November 2018 defeat of New York State Constitutional Convention by a final 98% to 2% tally) ‘and in facing’ the Janus decision’ (the U.S. Supreme Court ruling that allowed Public Sector Workers to opt out of paying Union dues) - ‘My Local has not had one Member opt out of their Union.’  It was the ‘one-on-one’ conversations ‘that worked’ (to ultimately convince Union-represented Workers of the worth of staying in their Union).  ‘We have to unite with each and every one of them (who voted for Trump in 2016 as the 2020 Presidential Election approaches,’” Bartolotta said. 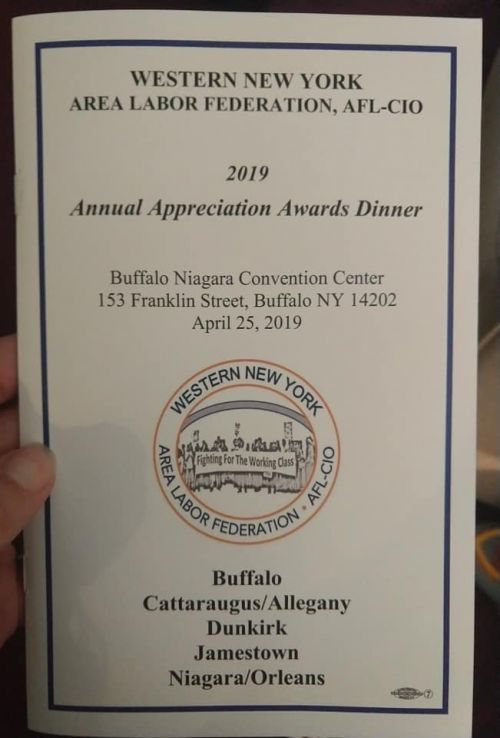 In what many said was a record number in attendance (there were more than 660 who bought tickets) in the history of the WNYALF’s Annual Awards Dinner, which was held at the Service Employees International Union (SEIU)-represented Buffalo Convention Center, WNYALF President Richard Lipsitz also paid tribute to Tripi before presenting Bartolotta with the award.

“The ‘sense of loss is very real,’” Lipsitz (Pictured Below/WNYALF Photo) said of Tripi.  “She was a ‘fierce proponent of all’ Unions and ‘when we were in a struggle, Flo was with you.’  ‘That’s why it is such an honor’ to have Richard Bartolotta receive our Activist of the Year Award that has been renamed in Flor’s honor.  ‘He has done some impressive stuff.’” 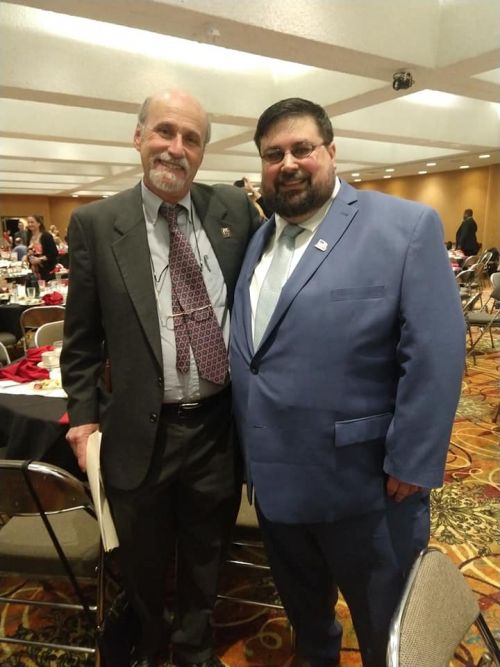 Bartolotta, who helped get a Young Unionists Group up and running in the Buffalo area and who has heavily involved himself in and volunteering many hours of his personal time to not only attending Labor rally and pickets, but to a variety of community efforts over the years - also took time to thank the late Tripi for the Union tutelage she provided to him while alive and the way she conducted herself to help obtain a better life for Union-represented Workers.

“This is ‘humbling to say the least.’  ‘Flo was, and still is, a legend.’  ‘I am grateful for the lessons she taught me because it was a dream of mine to grow up to be in the Labor Movement,’” said Bartolotta, who grew up in a Union Family and whose wife, Rachel, is a CSEA Member and a CSEA Union Official.  Their first date, he said, was on a picket line.

“My father ‘taught me that Unions leveled the playing field and that we were better together, than alone.’  My grandmother was a CSEA Member ‘and I remember when her Fios went out during the CWA-Verizon Strike, she would rather go without TV than let a Scab Worker into her house,’” Bartolotta told those in attendance, who let go with a hearty cheer of approval (WNYLaborToday.com Photo Below) 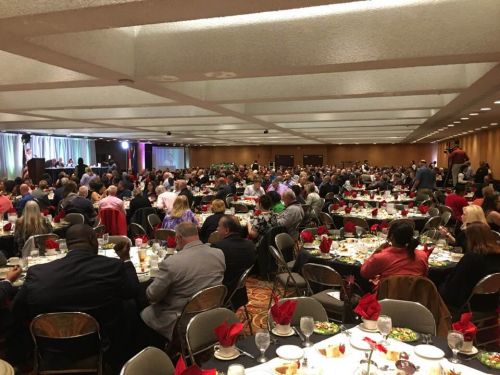 CWA President Shelton opened his remarks with a comment that it was “great to be back in Buffalo,” as well as taking time to praise Lipsitz and the WNYALF for the work they’ve done for the Western New York Labor Movement, as well as his fellow CWAers - whom he called “my heart and soul.”  A very large contingent of local CWA Leaders – including CWA Region 1 Director Deb Hayes, was in the house to honor and listen to their national leader, who was accompanied to Buffalo by CWA National Vice President Dennis Trainor.

“As a group, the Western New York Labor Movement ‘has proven - time and time again - there is no better group to stand with,’” Shelton said.  (Pictured Below/WNYALF Photo) 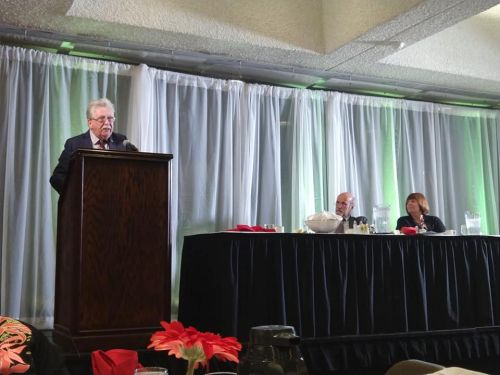 However, it didn’t take long for Shelton, known for the Labor fire that continually burns in his belly to an array of let say - colorful language, to get rolling.

From lamenting the lost fight by local Labor to keep CWA-represented New Era Cap Company’s manufacturing plant in nearby Derby (the operation was moved by the company to a Non-Union facility in Miami) to the “greedy bastards” of the business world who continually look to take advantage of their Middle Class Employees, Shelton implored those in attendance to move forward on what he outlined as three major initiatives Labor must now take.

“One, ‘we must select a new president in 2020.’  Trump ‘is a bigot who uses juvenile tweets and nasty name-calling.’  (Under Trump’s leadership), the National Labor Relations Board is ‘rolling back’ Worker protections, as well as overtime and in the Occupational Safety and Health Administration.  There’s ‘also a direct assault on Medicare and Social Security and his tax policy benefits the (1%) - not our Members.’  ‘Those rich bastards are stealing from our pockets every day,’” said Shelton while displaying an emotional anger.

“It’s ‘up to us’ to reform (the system),” he continued.  “We ‘need a political revolution in this country’ and we have to target those ‘soft’ Trump voters, who voted for him ‘because they wanted change.’  ‘Whomever (comes out of the Democratic field), we need to go all out and elect that person’.  (While New York State is sure bet to go Blue), I’ll be on a bus (headed to knock on doors and get out the vote in the State of Pennsylvania - which Trump won in the 2016 Presidential Election).  ‘Will you?’  ‘And, we must take back the Senate.’”

In addition, Shelton took the time to address the problem of racism in the United States and the negative impact it is having on all Americans under Trump.

“This ‘plays to our worst instincts.’  ‘It’s making an appeal to White Identity Politics and it has divided our country – to a place we haven’t seen since the 1960s and even the Civil War.’  ‘Real’ leaders ‘unite us and build our unity.’  ‘We cannot allow racism to be used to divide us.’  And those Immigrants (whom Trump demonizes) ‘are coming here to be free.’  ‘We must engage and unite.’”

“Thirdly, we must ‘renew’ our Unions.  The Stewards ‘are the backbone of our Union and the key to our future.’  CWA ‘will invest deeply’ in their training.  Our Members ‘must fight for their rights in the workplace and we must organize (new Members).’  ‘Unions have potent power and we are a power to be reckoned with,’” Shelton said amid a loud round of applause and cheers.