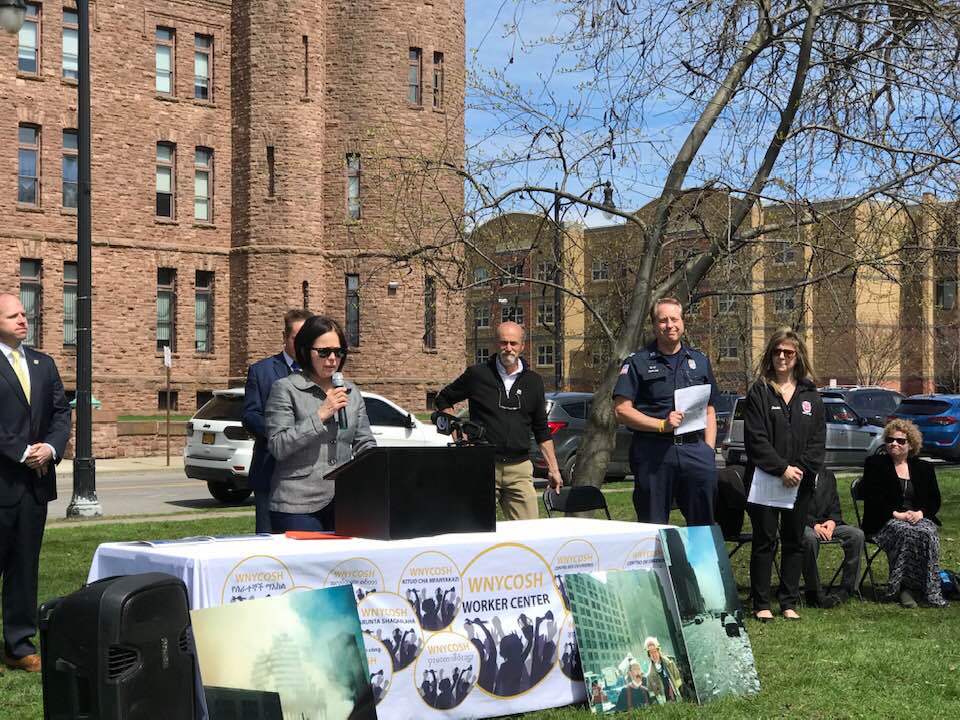 (BUFFALO, NEW YORK) - While millions around the world watched the World Trade Center Towers fall on 9/11, thousands of Western New Yorkers left their families and their lives to travel to New York City in response to the worst terrorist attack in the Nation’s History.

From across the Nation, from 434 out of 435 Congressional Districts, Americans - men and women - rushed to Ground Zero to help.  Little did they know that today, many of them would be horribly sick, while so many others have passed over the course of time after being exposed to what was left of the pulverized towers whose floors pancaked, one by one, as some literally disintegrated while they fell.

As a result, two funds were created to help First Responders and those others who were so negatively impacted by the events of 9/11: The World Trade Center Health Program and the September 11 Victim Compensation Fund (VCF).

As the country observes Workers’ Memorial Day, the Western New York Council on Occupational Safety & Health (WNYCOSH) is highlighting exposures to occupational illnesses faced by those responders or those who were directly impacted by the September 11th attacks.

WNYCOSH Executive Director, Germain Harnden put in succinctly in regard to caring for those made sick by their September 11th service: “Never forget ‘means never forget.’”

Today (Thursday, April 25th), First Responders, their families, Organized Labor – including the Western New York AFL-CIO Area Labor Federation (WNYALF), and Health and Safety Advocates came together to call for immediate passage of the Never Forget the Heroes: Permanent Authorization of the September 11th Victim Compensation Fund Act (H.R. 1327, S. 546) in order to extend the VCF to the year 2090 and to remove caps to the fund (Pictured Above/WNYCOSH Photo Via The Social Network Facebook).

During an event held outside the Connecticut Street Armory in Buffalo, U.S. Congressman Higgins (Democrat) said: “The September Eleventh Victim Compensation Fund ‘is critical to ensuring’ the victims, First Responders and families of those hurt or killed in the attacks and the aftermath ‘receive the care that they deserve.’  ‘We must not fail these heroes and their families,’ which is why I'm proud to be an original co-sponsor of (H.R. 7062), ‘which will extend the VCF, this time permanently.’”

WNYALF President Richard Lipsitz, who also addressed those in attendance outside the Connecticut Street Armory, said: "The WNYALF completely supports the National Legislation, especially as we mark the annual anniversary of Workers' Memorial Day.  There is no example (9-11) 'more important' needed to 'push through' this legislation."

Additionally, those participating in today’s event took time to honoring those Western New Yorkers’ who did not hesitate to rush to Ground Zero back in September 2001.

"Our First Responders ‘risk their lives every day in order to protect us, and they do so without expectation of recognition or praise,’" New York State Senator Tim Kennedy (Democrat) of Buffalo said.  "I'm honored to pay tribute to these brave heroes and recognize their dedication and commitment with distinction in New York."

WNYCOSH was founded in 1979 by Organized Labor, Environmental and Public Health Activists to raise awareness about toxic exposures around the Love Canal and the Goodyear Plant in Niagara Falls.

Over the past 40 years, WNYCOSH has built a membership base of Labor Union Locals, Health and Safety Activists, as well as many public health and legal professionals and individuals interested in Occupational Safety and Health Issues.

WNYCOSH has empowered hundreds of thousands of Workers, including Young Workers, Refugee and Immigrant Workers, Low-Wage Workers and Workers in high hazard industries through direct training to identify, evaluate and control hazards in the workplace.