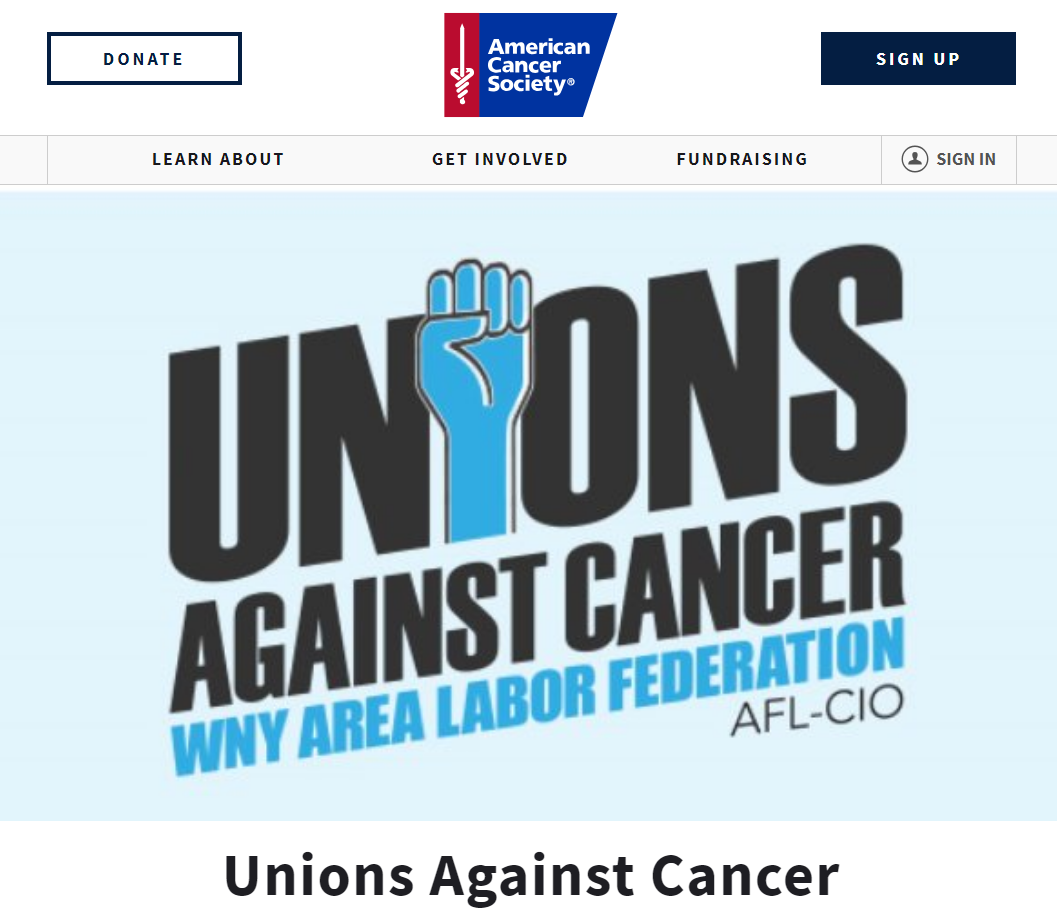 (WESTERN NEW YORK) – Cancer affects everyone, including those in the Labor Movement.  For some it is more than just a physical battle.  It can become an economic battle when a person fighting the disease must also contend with coming up with the money to pay for rides to get to treatment, hotel stays and wigs and head coverings.  And for some, it can result in additional anxieties in the form of bankruptcy and losing things most important to them.

But here in Western New York, the Western New York AFL-CIO Area Labor Federation (WNYALF) has put its stamp of approval on a fundraising effort called Unions Against Cancer, the brainchild of Joe Cantafio - who heads the West Seneca (New York) Teachers Association (WSTA), is an Executive Board Member of the New York State United Teachers (NYSUT) and who is currently running for a seat on the West Seneca Town Council.

“This ‘falls in line’ with our social mission,” WNYALF President Richard Lipsitz tells WNYLaborToday.com.  “Just like our efforts with the annual Variety Club Telethon to help Buffalo’s Children’s Hospital, the yearly Labor’s Night at the Races (fundraising event at the Ransomville Speedway in Niagara County), and donating blankets for young hospital patients.”

Cantafio is no stranger to donating his time and making an effort to help others in need.

Not too long ago, he was asked to participate in the 2017-2018 National Real Men Wear Pink Drive to raise awareness and dollars to fight breast cancer.  “Overwhelmed” by the outpouring of support from Organized Labor, Cantafio was able to help raise more than $60,000 - a total that was the most tabulated in New York State and 15th overall in the entire country.

Labor’s effort particularly stood up in light of the fact that many of the top collectors were CEOs, who garnered “very large donations,” in comparison to Unions and their Members who made much smaller contributions, but nonetheless combined to raise big money.

“This ‘is what Labor does,’” Cantafio tells Your On-Line Labor Newspaper.  “There are ‘so many Union Members doing good things.’  They ‘really show the heart of Labor.’  But (cancer), ‘sadly, also impacts Western New York and those in the Labor Movement too.’”

“The average donation for the Real Men Wear Pink Campaign was anywhere from ($5 to $25) each” he continued.  “At one point, we ‘had the most donations in the country.’  ‘I wanted to share this with other (Union) Locals.’  People are now telling me: ‘We can do it’ (with the Unions Against Cancer Campaign).  ‘We can help a lot of people.’”

The problems of cancer are real, including the economic ones patients battle.

In his pitch for WNYALF-affiliated Unions and their Members that was initially made during the WNYALF annual meeting in late March, Cantafio (Pictured Below/WNYALF Photo) said: “More than half become bankrupt (while going through and paying for their treatments).  They have to pay for their rides to and from treatment, wigs that cover their heads after losing their hair from radiation or chemotherapy treatment.  I’m hoping people will also get involved because they lost a loved one due to cancer.  All the money that’s donated will go into one big pile to help pay for these things.  I’m hoping we can raise a couple hundred thousand dollars.  Together we can do even more.  All of us have been touched by cancer.  We have lost family, friends, and Co-Workers.  Together we can accomplish so much.  Please consider joining our Unions Against Cancer Campaign.  You can choose how and when you will raise money.  You can choose to raise money in memory of someone to a cause (General Fund, wigs, rides, hotel stays).  All of this will go into a grand total from Unions.  My hope is next year at this time we will be able to celebrate how Unions Against Cancer shows once again, no hearts are bigger than Union hearts.” 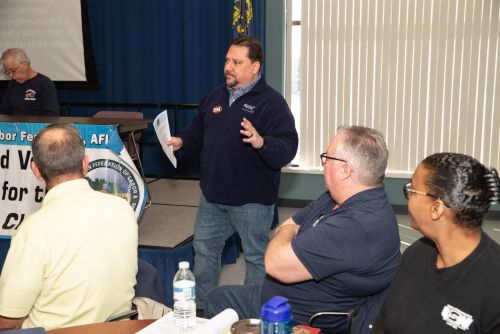 There’s a ton of information on the drive’s website: www.unionsagainstcancer.org, where Unions and their Members can go to learn more and get involved.  The website went live on April 1st and will run until December 31st (2019).

On the site, there are a number of options available to raise specific funds for those in Western New York, including: Rides to treatment for patients; Hotel stays for patients and caregivers; Free-of-charge wigs and head coverings; and a General donation that supports a 24/7 Cancer Hotline, Cancer Research and Low Cost Screenings.

Fundraising is made easy with the campaign’s official FUNdraising App, as well as e-mail templates and a Social Media Toolkit, says Cantafio, who tells Your On-Line Labor Newspaper that it’s “very simple to tell your story to your family, friends and Co-Workers on why this is so important to you and ask them to join you in the fight.”

An American Cancer Society Staff Partner can also be made available to assist anyone interested or those who make the decision to participate.

At the end of the year, all data from the Unions Against Cancer Campaign and other cancer-themed fundraisers will be tallied to demonstrate not only the total impact, but the power of Unions working together, Cantafio said. 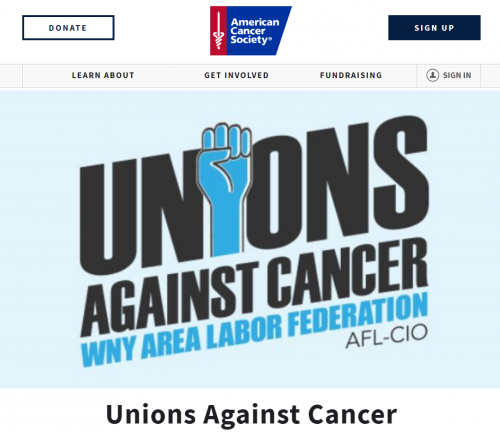 Meanwhile, Cantafio told WNYLaborToday.com that he will “be doing ‘a lot of one-on-ones’” regarding the Unions Against Cancer Campaign - including personally taking the time to address each of the five AFL-CIO Central Labor Councils across Western New York (in Buffalo, Niagara-Orleans, Dunkirk, Jamestown and Cattaraugus-Allegany), as well as making presentations in front of Union Members who attend their individual Local’s monthly meetings.

Cantafio is hoping that more and more Unions and their Members get involved in helping raise money in a variety of ways, including gate collections at their workplaces.

“Whatever works for them,” he suggests.

Added WNYALF President Lipsitz: “Joe’s ‘already done a remarkable job’ (through his involvement with the Real Men Wear Pink Campaign).  He was a top ten finisher across the country, so this, I think, ‘will be more than a worthy cause to involve Western New York Labor in.’”

For More Information On The Unions Against Cancer Campaign: Visit www.unionsagainstcancer.org.  In addition, anyone who is interested in becoming a Team Leader for their Union can contact American Cancer Society Staff Partner Dylyn Harrison at 716-689-6982 (Ext. 65255) or via e-mail at Dylyn.Harrison@cancer.org.  A Team Leader Kit, as well as instructions on how to register and additional fundraising support, are also available.  Cantafio can also be contacted via e-mail at JoeCantafio@Gmail.com or at 716-472-7334.