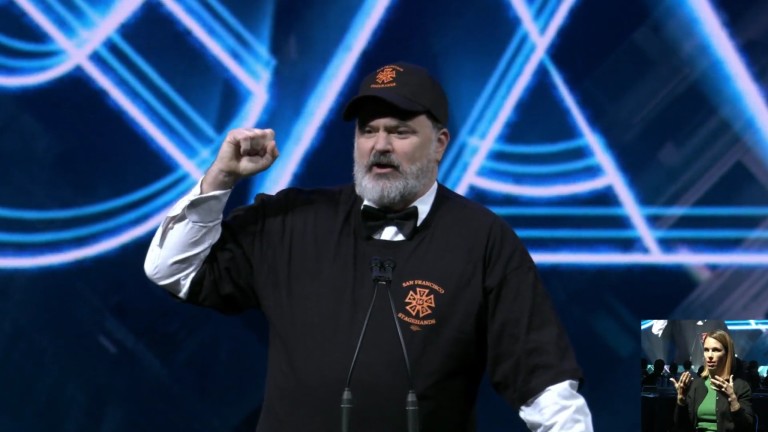 (SAN FRANCISCO, CALIFORNIA) - “I’m ‘not’ Anti-Union, ‘but I don’t really think we need them, right?,’” said Double Fine Head Tim Schafer while hosting the Game Developers Choice Awards, which was recently held in San Francisco. “We’re ‘all great here and in this show.’  ‘No one here is Union and...’”

Then the stage lights went out.

“Oh, right,” said Schafer after the lights went out.

“Except for the lighting crew.  I forgot they’re all Union,” he said.

Then the show producers gave him a tiny, nearly inaudible chipmunk voice and changed the teleprompter so it just read: “UNION!” - repeatedly, except in one place where it conspicuously said: “ONION!”

“I hear you,” said Schafer after the shenanigans concluded.

It was all a staged bit, of course, but one that illustrates that the calls for Game Developers to Unionize are getting louder and reaching the eyes and ears of its biggest names.

The gaming industry’s most visible Pro-Union Organization, Game Workers Unite, was out in force at this year’s GDC, handing out zines and even running multiple conference sessions.

With the inescapable shadow of layoffs looming heavier than ever and crunch culture chewing up developers and spitting them out, more and more developers have embraced the idea of Unionization.

After just one year, GWU has chapters in cities across the world.

That said, no triple-A video game companies have Unionized yet.

The lights-out bit was neither the first nor the last reference to Unionization.

At the end of the show, after the developers of God of War had taken the stage to accept the award for game of the year, Schafer returned to the stage, his suit covered over with a T-shirt baseball cap emblazoned with the logo of the Union whose Workers were putting on the GDC Awards show: the International Alliance of Theatrical Stage Employees (IATSE) Local 16.

In his closing remarks, he also thanked Local 16 by name.

Earlier in the night, Independent Games Festival Awards Host and Narrative Designer Meg Jayanth, sporting a pin that read: “UNION NOW,” made a more straightforward appeal in favor of Unionization: “It ‘is time, more than time, we as an industry left behind the idea that our work is made better by our pain - that the price of passion is exploitation, that job security and pension plans and workplaces free of harassment are impossible dreams.’  ‘We have to demand them collectively - not just for ourselves, but for each other as well.’”

Other developers also used their time on stage to quietly show support for the idea of Unionization.

At the end of the IGF show, the Seamus McNally Grand Prize was presented by Night in the Woods Developers Alec Holowka and Scott Benson, the latter of whom wore a “UNION NOW” pin and recently founded a Worker-owned cooperative alongside fellow designer Bethany Hockenberry to produce their next game.

Reactions to these pro-union sentiments were largely positive, though some questioned the validity of Schafer’s skit in particular, given that he’s the head of a Non-Unionized studio.

Many also pointed out the irony of Rockstar taking home the “Best Technology” Award that night, sans any mention of the sometimes-grueling work culture that made the company a poster child for problematic crunch last year.

“So,” GWU said on Twitter, “does this mean you’d support a Double Fine Employees Union or transitioning into a Worker Cooperative? We’d love to help.”

To Directly Access This Labor News Story, Go To: https://kotaku.com/unions-stole-the-show-at-last-nights-gdc-awards-1833478003?utm_source=Kotaku_Facebook&utm_medium=Socialflow&utm_campaign=Socialflow_Kotaku_Facebook&fbclid=IwAR0Y7Y0KIR_vdf4tQ68ASXsz1wEoIlIYAo2cgOCsFYbmC9jduGalv5acbUQ