Meet Maria Moreno: New Documentary Tells Story Of The Migrant Mother Of 12 Who Was The First Female Farm Worker In America Elected As A Union Organizer 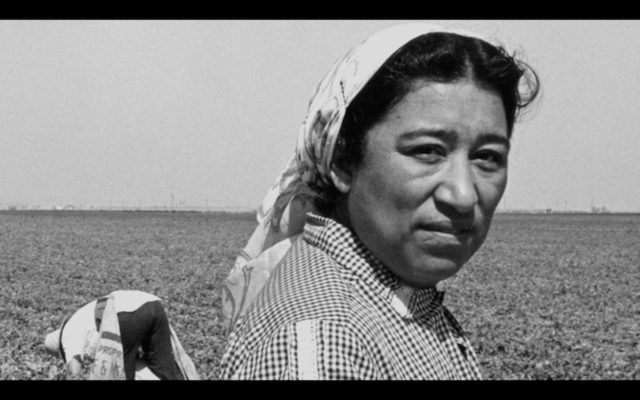 Before César Chávez and Dolores Huerta, there was Maria Moreno, a Union Organizer whose story all but disappeared from history until the discovery of lost photographs taken more than 50 years ago by George Ballis, one of the leading photographers of the Farmworker Movement.

It was a discovery that sparked the search for a woman that time had forgotten.

The story of Maria Moreno - a migrant mother of 12, who was elected by her fellow Mexican-American, Filipino, Black and Okie Farmworkers to represent them - the first female Farmworker in America to be hired as a Union Organizer, is now being told in a new documentary: “Adios Amor: The Search for Maria Moreno.”

As Laurie Coyle, the film’s director, told Colorlines: “The search for Maria guides this documentary, where ghosts fade in and out and magic underpins a rawboned reality.  In the end, whose stories get told may hinge on memories, coincidence and - in Maria’s case - an insistence on pursuing a path that touches the lives of others.  From California’s great Central Valley, to the Arizona desert and U.S.-Mexico Border, the journey yields buried treasure and stories told with passion and humor.”

Colorlines interviewed Coyle about the inspiration for the documentary, Moreno’s organizing journey and how her legacy lives on.

Let’s start with the basics: Who was Maria Moreno?

Coyle: Maria Moreno was a migrant mother who was driven by her 12 children’s hunger to become an activist in the late 1950s.  She was born in Texas in 1920 and came to California during the Dustbowl Migration.  Her father was an orphan of the Mexican Revolution and her mother was Mescalero Apache, so Maria was Mexican American, indigenous and a U.S. citizen.

What motivated Moreno to become a Union Organizer? How did she get hired?

Coyle: The 1958 flood in Tulare County, California, left more than 300 Farmworkers displaced and without work.  According to county regulations, Farmworkers weren’t eligible for food assistance.  Many of them were going hungry and Maria’s eldest son stopped eating so that his younger brothers and sisters would have a little more to eat.  He went blind temporarily and had to be hospitalized.  Maria started speaking out, and Ron Taylor at The Fresno Bee covered her story.  Maria’s testimony created such a stir that the county welfare agency reversed its policy and offered food assistance to the Farmworkers.  Word about Maria got out, and in 1959, when Norman Smith was sent by the AFL-CIO to launch the Agricultural Workers Organizing Committee, Maria Moreno was one of the first Organizers that he hired.

Describe the conditions Farmworkers faced that led her to start speaking out and organizing.

Coyle: In spite of the unprecedented affluence in the post-World War II years, Maria Moreno’s family and other Farmworkers were living in conditions that hadn’t changed since the Depression.  Farmworkers had been excluded from the rights won by most industrial workers in the 1930s, such as the right to organize and bargain collectively, Minimum Wage, Social Security and unemployment.  Child labor, which had been outlawed decades earlier, was still common in agriculture.  Families depended on their children’s labor to make ends meet and most of those children attended school irregularly.  They lived in rural ghettos and segregated migrant camps, often without heat, running water or toilets.  Life was especially difficult in the long winter months after the harvests were done.  At the time Maria started organizing, Farmworkers were making 85 cents per hour, or a piece rate that amounted to less, well below the Minimum Wage.  At that time, Farmworkers were demanding $1.25 per hour.  The government never set wage standards for Farm Labor and the growers never committed to a living wage.

The movement that César Chávez headed up in the 1960s-’70s pushed through reforms like the Right to Collective Bargaining, a Minimum Wage, Disability, Unemployment Insurance, and drinking water and toilets in the fields - but these gains applied only to California Farmworkers, not the nation.

Today, only 1% of California’s Farmworkers are covered under a Union Contract and those who aren’t frequently don’t benefit from Farmworker protections.

To Directly Access This Labor News Report, Go To: www.colorlines.com/articles/meet-maria-moreno-first-farm-worker-woman-america-be-hired-union-organizer?cm_mmc=Act-On+Software-_-email-_-Some+Good+News+About+the+Media+as+Kerner+Turns+50-_-Meet+Maria+Moreno:+The+First+Farm+Worker+Woman+in+America+To+Be+Hired+As+A+Union+Organizer