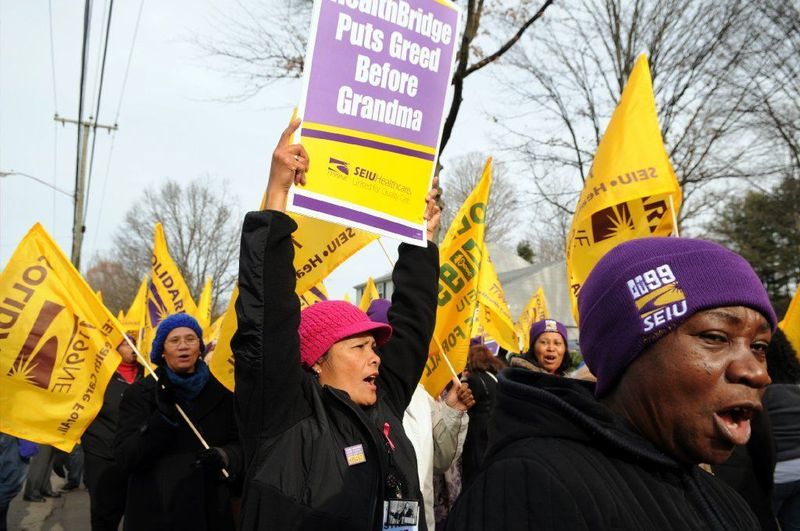 (HARTFORD, CONNECTICUT) - Unionized Workers employed at 20 Connecticut Nursing Homes are threatening to Strike, saying they earn only $13 to $15 an hour and have received meager raises in recent years.  More than 2,500 Workers could head to the picket lines on May 1st if an agreement is not reached.

The Service Employees International Union (SEIU) 1199-represented Workers aired their demands as 31,000 Stop & Shop Workers are continuing their Strike that has stretched across Southern New England. The Union Nursing Home Workers have already voted overwhelmingly - 1,449-to-78 - to authorize a Strike.  The Workers include Nurses, Certified Nursing Assistants, Dietary Workers and Housekeepers, among others.

During a news conference at the State Capitol complex, the Nursing Home Workers were highly energized and seemed ready for a Strike with loud chants and responses to Union and political speakers.  They’re seeking raises of 4% in 2019 and 4% in 2020.  Many have gotten increases of only 25 cents to 30 cents an hour in recent years, SEIU Representatives said.

SEIU Union President Rob Baril referred to the Workers as “1199 Warriors” during the sometimes-raucous news conference.  "We ‘need to raise wages’ in nursing homes,” he said. “It is a ‘labor of love, but you cannot pay the rent with love.’  Workers voted for a strike ‘because there must be change in their conditions.’  ‘We refuse to be second-class citizens.’”

The Reverend AJ Johnson of Urban Hope Refuge Church in Hartford said the workforce is “in particular, women of Color,” who perform difficult tasks.  He drew cheers from the Union crowd when he said: “Some are ‘doing some of the hardest work that some of our legislators in this building would never do!’”

While the Workers complained repeatedly that they are underpaid, Governor Ned Lamont’s Administration responded that money has been sent to the industry.

Matthew Barrett, who serves as the President of an association of 160 nursing homes and assisted living facilities in Connecticut, said the legislature needs to allocate more money for Medicaid that can be directed to the nursing homes to pay the Workers.

The 20 homes that could be affected by the strike are currently making contingency plans, including potentially hiring replacement Workers to care for the patients, he said.

To Read This Labor News Report In Its Entirety, Go To: www.courant.com/politics/hc-pol-potential-nursing-home-strike-20190415-uc3kts3zbfcoreayciqa6xhwsq-story.html