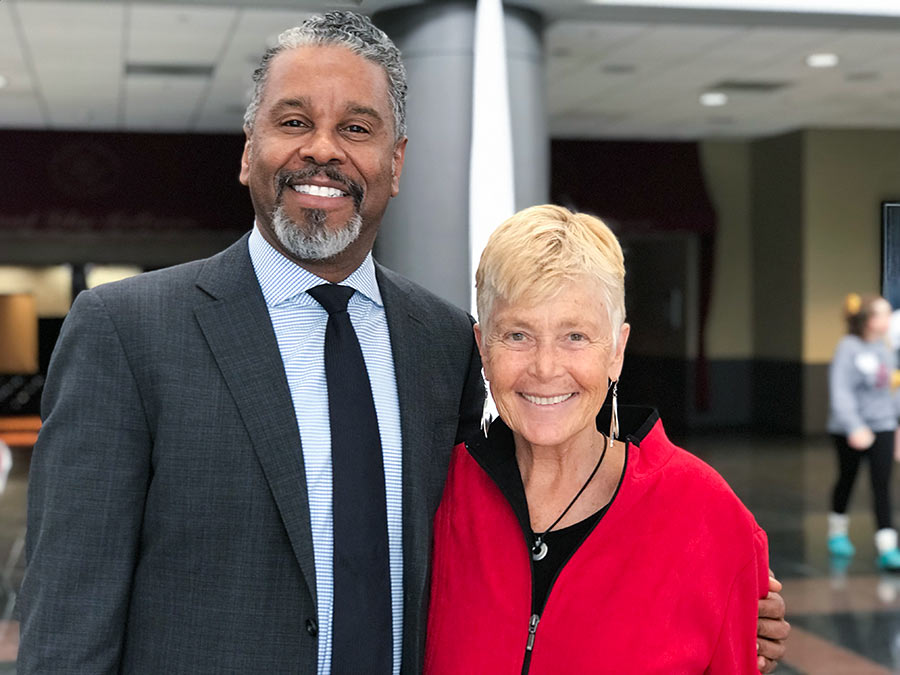 (ROCHESTER, NEW YORK) - It was a very busy day for Jocelyn Goldberg-Schaible.  It was her birthday and she had plans to travel to Ithaca to celebrate with her son.  But first, she had to a make big announcement about the winner of the Princeton Prize in Race Relations to students at the Roc2Change Summit on Race in Rochester.

And somehow in between, she also had to track down Philippe Abraham, Secretary-Treasurer of the New York State United Teachers (NYSUT), who spoke at the Union-sponsored summit about his struggles coming to America at age 17 from Haiti, where he said his brown skin and clipped accent led people to make assumptions about his abilities and intellect.

For Goldberg-Schaible, who works for the Rochester Research Group, getting a minute with Abraham was personal.

She wanted to thank him for all the Union had provided her mother, retired United Federation of Teacher (UFT) Member Eileen Schnier, who recently died at the age of 98.

Schnier taught physical education and was a college advisor to high school students.

“All the way until she died, her Teacher’s pension ‘kept coming and it enabled her to live independently,’” said Goldberg-Schaible. “It ‘enabled her to live well, and it made all the difference in the world.’  Social Security ‘wouldn’t have been enough.’  ‘I want to write a thank-you letter to the Union.’”

Goldberg-Schaible recalled how her grandmother wanted to be a Teacher, but back then, Teachers could not be pregnant, so she was discouraged from pursuing her dream because she also wanted to raise a family.

And when Goldberg-Schaible’s mother was ready to choose a profession, she went in to the teaching, attracted in part by the influence of Unions.

“My mom ‘was the first generation who could be a Teacher and raise a family,’” she said.

She got involved with her Union.

“My mother marched with Albert Shanker on the picket line,” Goldberg-Schaible said proudly, referring to early Teacher protests in New York City led by the legendary Labor Leader and former President of the UFT - and later, the American Federation of Teachers (AFT).

“She ‘understood how important those issues were back then, and that they were long-term game changers.’  ‘She was grateful for the advocacy that the Union provided,” Goldberg-Schaible said.

To Continue Reading This Labor News Report, Go To: www.nysut.org/news/2019/april/rochester-woman-thanks-union-for-all-it-did-for-her-mother