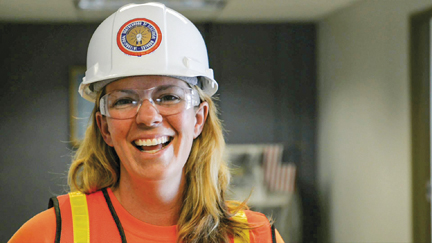 (THE STATE Of MASSACHUSETTS) - In the State of Massachusetts, the share of Women in Construction Union Apprenticeships is almost triple the national average of Women in construction.

There were 619 Women in Joint Union Apprenticeship Programs and 39 in Non-Union programs in 2019, according to Division of Apprentice Standards analyzed by the Policy Group on Tradeswomen’s Issues (PGTI).

Work on the MGM Springfield and Encore Boston Harbor Casinos represented 400 of those Women, the PGTI found, although the number of Women in Apprenticeship Programs has been rising steadily since at least 2012, when it was under 200.

According to the Federal Bureau of Labor Statistics (BLS), Women represent 9% of the construction industry nationwide.

“I am thrilled that NABTU is recognizing the stellar work of the Massachusetts Building Trades Unions, PGTI, Building Pathways, Massachusetts Girls in Trades, and the successful Build a Life movement,” MassBTC Frank Callahan said.

“The MassBTC will continue to work with our impressive partners across Massachusetts to diversify the Building Trades and break down barriers to good jobs for Women,” he said.

The Massachusetts Building Trades Unions represent more than 75,000 Men and Women across the State.

“At PGTI, we offer support to any Union, Apprenticeship Program, contractor or organization looking to increase Women Apprentices, Members and Employees, and it’s wonderful to see our work is having a clear and successful impact on the success of women in the Trades,” PGTI Research Director Susan Moir said. “Gender equity in construction not only helps Women, but also helps entire communities.  I’m grateful to NABTU for recognizing PGTI’s important work.”

Building Pathways, a Union Pre-Apprenticeship Program that works alongside the PGTI, provides a gateway for low-income Boston area residents, particularly in underserved communities, by offering Apprenticeship Preparedness Training and advocacy.

Massachusetts Girls in Trades is an advocacy group working to break down barriers for Women by promoting the Trades to girls.

Nationally, Women in construction earn about 92% of what Men make for the same work, according to a recent study.

To Directly Access This Labor News Report, Go To: www.bankerandtradesman.com/state-sees-surge-in-female-construction-apprentices/