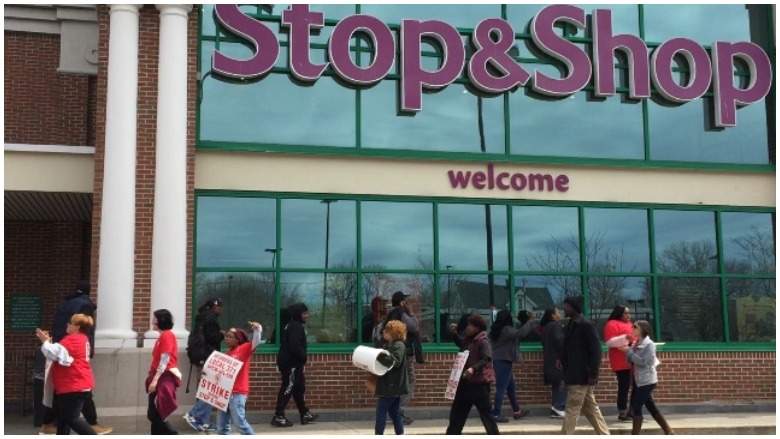 WCVB-TV Crews at several stores report the doors were locked.  Several viewers also told WCVB-TV that they were "kicked out" or told to check out immediately.  In Quincy, Norwood and Amebsury, customers told WBZ-TV that Store Workers suddenly told them to leave while they were shopping.  “I was shopping in Quincy and I had to leave my stuff right there and walk out,” one shopper said.  Another in Amesbury said the store “ordered all customers to come to front, cash out, and leave.”

United Food & Commercial Workers (UFCW) Local 1445, which represents thousands of Stop & Shop Workers in Massachusetts, Rhode Island and Connecticut, voted to authorize a Strike in February after the Workers’ last contract with the company expired on February 23rd.

Five UFCW Locals - which combine to represent 31,000 Stop & Shop Workers in New England - have been attempting to negotiate a new contract with Stop & Shop Representatives since February 14th, the Union said.

Workers have rallied against the company as its proposed cuts centered on Take Home Pay and benefits, which will significantly hamper their ability to be fairly compensated, one UFCW Local reported.  Disputes between management and Workers also involve health insurance, pensions and vacation time, they said.

The UFCW has accused Stop & Shop of trying to “degrade the quality of life” of its Workers.

“What they’re proposing is unfair, and we’re not gonna take it,” Matt Sorbello, a Union Leader in Mansfield, told WBZ-TV. “I’ve been here twenty-five years, always gotten time and a half on holidays and Sundays - they want to take that away.”

On its web site, Stop & Shop said it is the "only large fully-Unionized food retailer left in New England."

For More On This Labor News Report, Go To: