Tentative Agreement Calls For The Hiring Of More Than 1,450 Nurses, As Well As Registered Nurse Staffing Based On Staffing Ratios Included In Collective Bargaining Agreements & That Safe Staffing Will Be Enforced By Independent Neutral Party 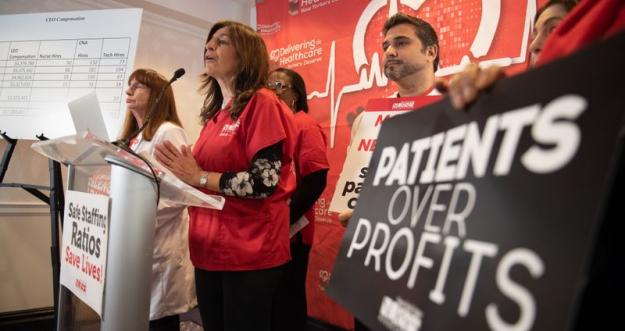 The initial hires will include Nurses to fill current vacancies and will also include an additional $100 million dollars to hire Nurses for newly added full-time positions, they said.

Registered Nurse Staffing will be based on safe staffing ratios that will be included in the Collective Bargaining Agreements and enforced by an independent neutral party, Union Representatives said.

The contract also includes across-the-board wage increases of 3% in each year of the contract and full retro-pay.

For all facilities, the contract calls for millions of dollars for Retiree Health Benefits, Tuition Reimbursement and other monetary benefits.

The tentative agreement also strengthens Worker Protections including new guidelines to stop Workplace Violence, a process to improve Safe Patient Handling, and language allowing Nurses to aid victims of disasters inside or outside the United States.

The tentative agreement will now go for a full vote by NYSNA Membership.

To Directly Access This Labor News Story, Go To: www.nysna.org/press/2019/members-new-york-state-nurses-association-announce-tentative-agreement-mount-sinai#.XK4vvphKiiM