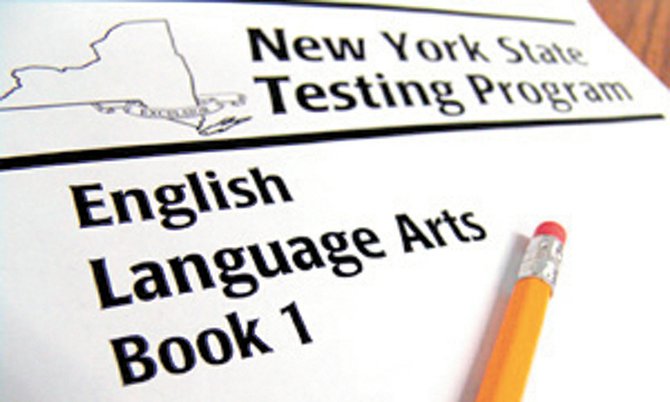 Last year, in response to alarmed parents and teachers, the BTF alerted Buffalo Schools Superintendent Kriner Cash, the Board of Education and the Board of Regents to the actions taken by some School Administrators to intimidate and coerce students and parents to participate in State Testing.

“Once again, some Buffalo School Administrators are attempting to undermine parents who, in the interests of their children, have chosen to not have their children take the State Tests.  Pressuring parents and students with false and discriminatory actions is in my opinion the worst form of bullying and child abuse,” BTF President Phil Rumore said.

The following actions have been reported to the BTF by parents and Teachers:

School 19: After some students brought in opt-out letters, the administrator stated: “If you take the test you will get a prize.”  The students called home and talked to their mothers, but the student still would not agree to take the test.  At least one student was held out of classes for 40 minutes and upon returning to the room, was angry and highly agitated.  It was reported the Teacher had to use de-escalating techniques because of his emotional state at the time; Another student was asked to try and was told there was not an essay.  This student hates writing and has melt downs during classes.  The second day of testing resulted in the student pounding his desk, grabbing his face and pushing in his eyes.  Teachers report the student does not like writing and that this throws him into crises.  We understand that at one point, the student wished he could die right then and there; The administrator at School 19 has pulled in every student that brought an opt-out letter to “talk to them” - harassing them is more to the point, upsetting students to the point of tears, then calling the parents.  We are told one bilingual student told Teachers: “My mom wrote a letter, but I have to take it anyway.”  Another student with a disability told the administrator to stop harassing him by repeatedly telling him he had to take the test.  There was an announcement saying there would be something special for students after the test.  A few students brought in opt-out letters.  Teachers were instructed to send the students down to the office with their letters.  The students were then interrogated and continually asked why they were not taking the test.  One student said he was told to “just take it, it doesn’t count as a grade.”  He went on to say he told them for multiple choice, guess if you don’t know it and just copy from the text for the written part; Another student reported that a fellow student was being asked to take the test, but the student kept saying “no” and that other Teachers were brought in to convince the student to do so, but that she still refused; A student told a teacher that he was in trouble for not taking the test.  He said they offered him a prize as a bribe and he still wouldn’t. He then said they sent him back to class so he asked for a pass to the auditorium.  He said when he got to the auditorium, he was called in an effort to still make him take the test so he wouldn’t be in trouble; Another student turned in an opt-out letter for the ELA (English Language Arts) assessment.  After being called to the office, the student told other students - in the presence of other Teachers - that he decided to take the test.  He said the principal said he could fail and be left back if he did not take it.

School 37: Futures Academy is having an ice cream party only for students who took the test.

School 43: The assistant principal sent out an e-mail notifying Staff that she was successful at calling parents and getting their “permission” allowing their child to take the test after opting out their child.  Students who took the test were given tickets for popsicles at lunch.

School 59: Students had to sit for the ELA exam to be eligible for the roller skating field trip.

School 67: Students are being told in lunch and over announcements that if they don’t take the test, they are hurting the school; Students who have already handed in letters are being pulled out of class and talked into taking the test; The administration is also calling parents individually who opt their child out of the test; Teachers are being asked to give students incentives for taking the test and are being asked to encourage all students to participate; There is a pep rally being held which send the message to students to take the test: Students are also being told that a refusal will go on their record and will hurt them when trying to get into a good high schools; The principal is going from classroom to classroom telling students that if they participate they will be able to partake in a huge incentive in June.  The principal is telling Teachers: “Please encourage students to take the New York Stat Assessments.  We are currently not meeting participation rates in certain grade levels.  I am contacting parents as I receive refusal letter.  Your support is appreciated!”

School 72: We have been advised the principal told Staff at School 72 that he called every parent who opted their child out to coerce them into having their students take the State Tests. He succeeded with many because he told them that it wasn’t legal for kids to opt out and we need to have 95% participation.  A parent said the principal called and was trying to tell them how important it was and when the parent said no, he said it was Federal Law that 95% of the students had to take it and they would get fined if they weren't in compliance!  He told the students’ class the same thing - but added the 5% that don't take the test are intellectually challenged.

School 79: There’s outside time given to everyone who participated in the State Assessment. Anyone who didn't participate has to sit in a room; Students are being told there’s no such thing as opt out and that they have to take the test; Teachers were wrongly told at a faculty meeting that the control of whether to take or not to take the ELA/Math assessment rests squarely on the shoulders of the children.  Even if the parents write an opt-out letter, if the child says: “I want to take the exam” when he/she arrives at school, he/she will take the exam; At School 79 the principal told staff that parents are not allowed to opt-out their children. Their letters mean nothing and that the children has to refuse the test themselves; Students who take the test are invited to a fun day and throw a pie at the principal; Administrators allowed students who took the test to take part in a field day. They also let students throw pies at them.

School 81: The principal called parents, telling them the tests were important, that the tests would tell them how students are doing, and how the Teachers are doing with curriculum; The principal is also saying that there are a lot of benefits that the school gains from taking it; The principal also says it’s part of Federal and State Law that 95% of the students take this test.

School 195: Parents of City Honors students said some students not taking the tests were made to sit and stare. They were not permitted to even read at City Honors!

Schools 196 & 197: Students are given SkyZone passes if they take the test; Some principals are stating that at a principals meeting, they were advised by the Schools Superintendent to provide incentives to students taking the State tests.

The BTF said: “We do not believe that Superintendent Cash would condone the actions listed above.  We look forward to him clarifying his alleged statements to principals and his condoning the above degrading and bullying tactics and taking action against all the administrators who are found to have engaged in these actions.”

The BTF also released a statement from Chancellor Betty Rosa and New York State Education Department Commissioner MaryEllen Elia stating: “We would like to remind school leaders of the importance of honoring requests received by parents to opt their children out of the exams” and “parents have a right to opt their children out of these exams” and “we have also heard of isolated but troubling reports of parents’ requests being ignored.”