Pennsylvania Department Of Labor & Industrys Office Of Unemployment Compensation Rules In Favor Of Striking Wabtec Workers In Erie, Who Will Now Receive Unemployment Pay Over The Protests Of The Company 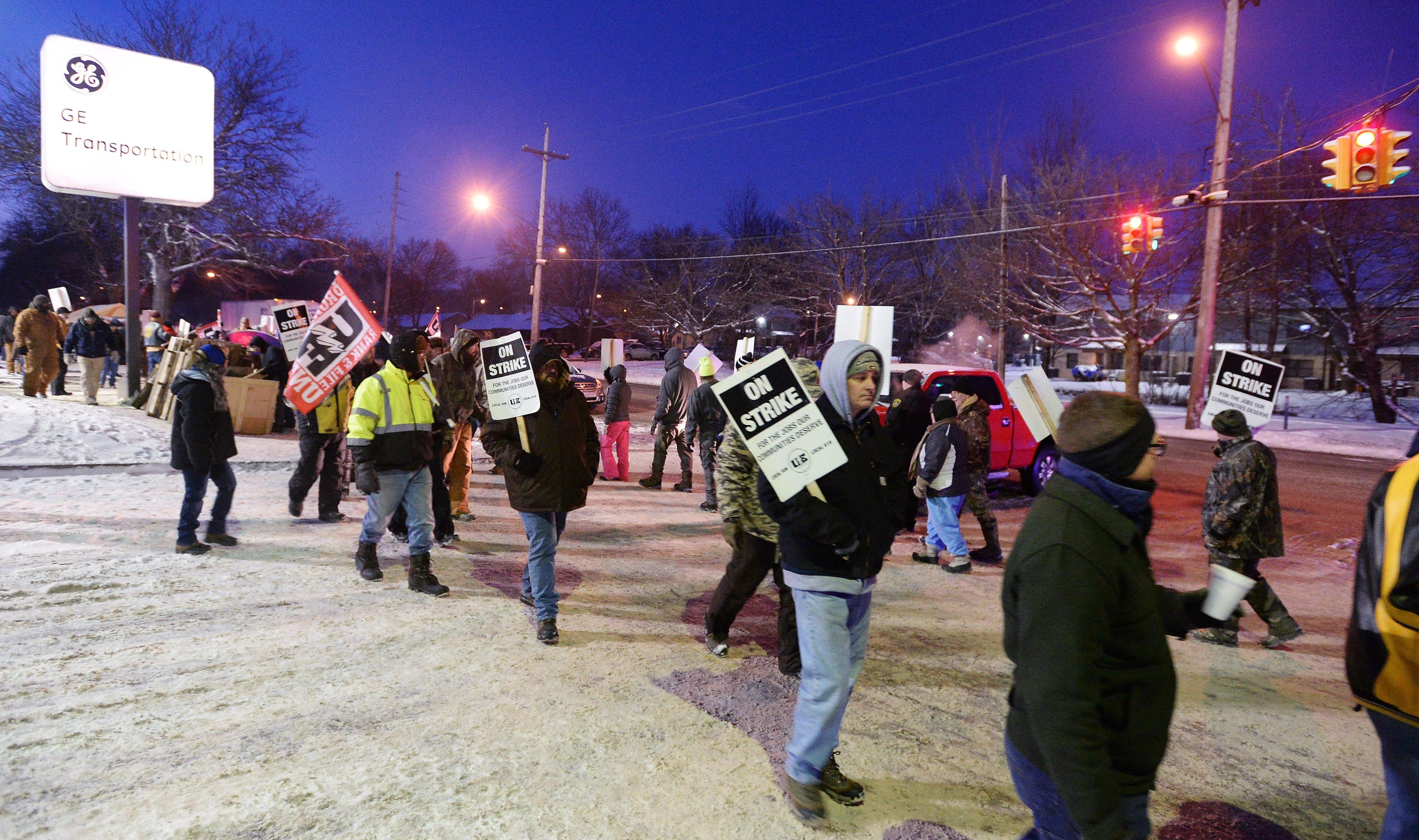 (ERIE, PENNSYLVANIA) – Workers represented by the United Electrical, Radio and Machine Workers of America (UE) at the former GE Transportation Plant in Erie have insisted their nine-day work stoppage that started on February 26th was a lockout.

Their employer, Westinghouse Air Brake Technologies Corporation, which had purchased the company a day before Workers walked off the job, said there was no truth to that claim and that Workers were free to return to their jobs.

But it was ultimately decision-makers in the State Capitol of Harrisburg who decided the nine-day work stoppage met the definition of a lockout.

As a result, Unemployment Compensation Claims filed by Wabtec Workers have been approved.  That means Workers who filed claims will be paid for at least part of the time they walked the picket line.

Tim Bader, a spokesman for Wabtec, registered disapproval on behalf of the company, which is in the midst of negotiations with its 1,700 Union-represented Workers in Erie.  He added: “Wabtec will be filing an appeal.”

Lindsay Bracale, a spokeswoman for the State Department of Labor & Industry, said she could not comment on the process or the rationale used to determine that Wabtec Employees would be eligible for benefits.  “Federal and State Laws to protect individuals prevent the department from sharing information about specific unemployment compensation claims,” she said in an e-mailed response to a question.

However, as the work stoppage began, Slawson was urging Workers to file for Unemployment Compensation and to view what was taking place as a lockout: “We are ‘serious about that.’  We offered to work ‘under existing terms and conditions’ and the company said, ‘no.’  It is a ‘joint merger’ between General Electric and Wabtec.  ‘We view it as a clear successor.’”

Pennsylvania State Representative Pat Harkins (Democrat-Erie) said his office had been encouraging people to apply and helped a number of Workers with their claims: “We always do that, no matter what the situation is.  I don’t know what the Department of Labor and Industry’s decision was based on, but there is a process in place.”

Harkins, who walked the picket line as a Striker working at UPS in 1997, said he knows that Wabtec has a right to appeal the decision: “At the end of the day, ‘I hope it will work out the way it is for the Workers’ sakes’.  I think ‘in the grand scheme of thing they fought for what they thought was owed to them.’”

Meanwhile, the cost of Wabtec’s Unemployment Insurance is based in part on the number of unemployment claims made against the company.

To Read This Labor News Story In Its Entirety, Go To: www.goerie.com/news/20190403/striking-wabtec-workers-in-erie-to-receive-unemployment-pay?fbclid=IwAR3GCBGBPE6kLfpi0Cu9sxqzv9aQX-bdkxL6bVsUkKxvXpTuhVliapYE6DQ#