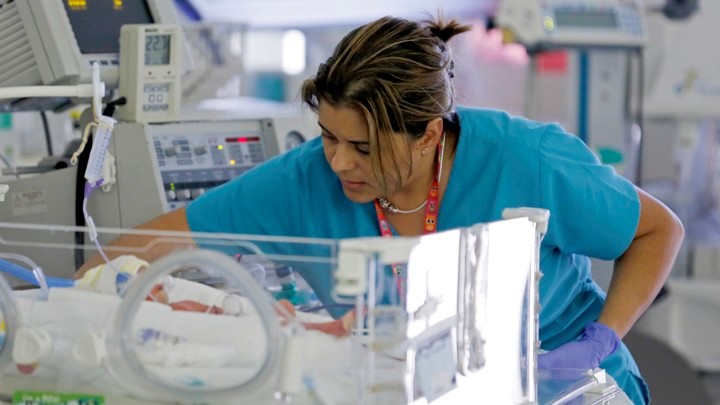 Five years ago, my mother was rushed to the hospital for an aneurysm.  For the next two weeks, my family and I sat huddled around her bed in the intensive-care unit, oscillating between panic, fear, uncertainty and exhaustion.  But it was the Nurses that got us through that time with our sanity intact.  Nurses checked on my mother - and us - multiple times an hour.  They ran tests, updated charts and changed IVs.  They made us laugh, allayed our concerns and thought about our comfort.  The doctors came in every now and then, but the calm dedication of the Nurses was what kept us together.  Without them, we would have fallen apart.

Which is just one reason why the prospect of A National Nursing Shortage is so alarming.

The U.S. has been dealing with a Nursing deficit of varying degrees for decades, but due to an aging population, the rising incidence of chronic disease, an aging Nursing Workforce, and the limited capacity of nursing schools - this shortage is on the cusp of becoming a crisis, one with worrying implications for patients and health-care providers alike.

America’s three million Nurses make up the largest segment of the health care workforce in the U.S. and nursing is currently one of the fastest-growing occupations in the country.

Despite that growth, demand is outpacing supply.

According to the Bureau of Labor Statistics (BLS), 1.2 million vacancies will expected to emerge for registered nurses between 2014 and 2022, by 2025, the shortfall is expected to be “more than twice as large as any nurse shortage experienced since the introduction of Medicare and Medicaid in the mid-1960s,” a team of Vanderbilt University Nursing Researchers wrote in a 2009 paper on the issue.

The primary driving force in this looming crisis is the aging of the Baby Boomer Generation: There are now more Americans over the age of 65 than at any other time in U.S. History. Between 2010 and 2030, the population of senior citizens was projected to increase by 75% to 69 million, meaning one in five Americans will be a senior citizen.

And as the population ages, demand for health care services will soar.

About 80% of older adults have at least one chronic condition and 68% have at least two, according to the National Council on Aging.

A USA Today analysis of Medicare data revealed that two-thirds of traditional Medicare beneficiaries older than 65 have multiple chronic conditions, a number that will only continue to climb.

“People with chronic diseases clearly use more health care services and people who are older have more chronic disease,” said Julie Sochalski, an Associate Professor at the University of Pennsylvania School of Nursing. “The aging population and chronic disease are creating the perfect storm driving demand for Nurses.”

But swelling demand is only part of the problem.

Like the patients they serve, the country’s Nurses are also aging.

Around a million Registered Nurses (RNs) are currently older than 50, meaning one-third of the current Nursing Workforce will reach retirement age in the next 10 to 15 years.

“The biggest cohort of Registered Nurses joined the workforce before the 1970s,” when career choices for women were more limited, said Pam Cipriano, the President of the American Nurses Association (nursing is still overwhelmingly female).

As a result, the field now skews older.

“Many Nurses held off retiring during the downturn in the economy, she added, “but now the retirements are starting.”

To Continue Reading This Labor News Story, Go To: www.theatlantic.com/health/archive/2016/02/nursing-shortage/459741/?fbclid=IwAR3wiBQpf1DfLzTTi0ccrEHhF1Ed2m2I1uR0ngL35Rn_L0M2J7XfMW7tHKs