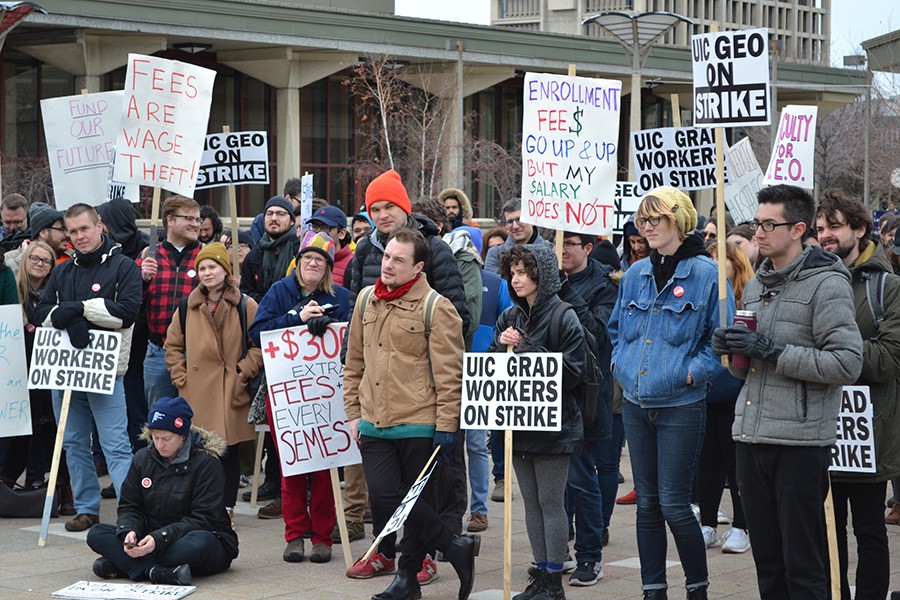 (CHICAGO, ILLINOIS) - After more than 13 months of negotiations, Teaching and Graduate Assistants at the University of Illinois at Chicago (UIC) have reached a tentative contract agreement with the university that puts the more than 1,500 Workers on the verge of ending their more than two-week strike.

The three-year agreement would ensure wage increases, cheaper health care and other financial gains for the Workers represented by the UIC Graduate Employees Organization.

But despite agreeing to terms for a new contract, the Union will continue its Strike - which began on March 19th - because the terms of the Strike’s end have not been settled.

The university’s negotiator still needs to consult with UIC management before details of the Strike’s conclusion - such as how Workers could recoup lost pay - could be finalized.

“The main thing for us is that it’s not over,” said Jeff Schuhrke, Co-President of the Union. “We’re still on Strike because their negotiator said he didn’t have the authority to negotiate the terms to end the Strike.

The Workers on Strike make a baseline salary of $18,000 while paying $2,000 in university fees, according to the Union.  Schuhrke said the university has - in the past - used fees to offset raises and give indirect pay cuts.

Under the new contract, workers would see reduced fees, increased company contributions to health care plans, coverage of dependent care by the university and a $2,550 wage increase over three years - the largest raise in the Union’s history.  Hiring discrimination on the basis of citizenship or immigration status would also be barred, the Union said.

Schuhrke said all of the university’s concessions were “major wins” for the Graduate Workers, many of whom packed the room to watch the open negotiations the past two days.  “We feel good.  This was a really hard fight,” he said. “For Graduate Workers, it’s always difficult to just even have a Union.  To do this, to win our best contract to date, we’re happy and we’re proud.”

To Read This Labor News Report In Its Entirety, Go To: https://chicago.suntimes.com/?post_type=cst_article&p=2158598&fbclid=IwAR3LYo6X_uNBydkObmqQt8-hevhPx_EeCLy7T6os_rwcWbq6ZdnJmyijqck