Even Union Dentists Are Hitting The Picket Line 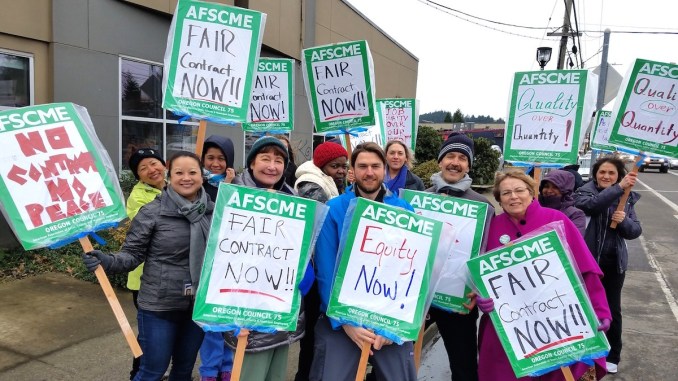 (MULTNOMAH COUNTY, OREGON) - A group of Union-represented Dentists in Oregon recently hit the picket line on their lunch hour to let the public know they want a fair contract.

Last Spring, 28 Dentists employed at seven Multnomah County clinics voted to join Oregon American Federation of State, County & Municipal Employees (AFSCME) after the county increased their patient load by 20% in 2017 - to about 22 patients a day - without giving them any say in the matter, or any increase in compensation.

Union and management have been negotiating since late August, but they’ve had a hard time reaching agreement on a first contract.

Pay is a key sticking point.

Dentists also want a standard Union Grievance and Arbitration Process so Dentists can defend themselves in cases of discipline.

Instead, county managers want to create a kind of disciplinary panel made up of Dentists, a proposal the Union thinks could be unworkable.

In mid-February, a delegation presented a petition to Multnomah County Chair Deborah Kafoury signed by a majority of the Dentists and explained their position to her directly.

The two sides are scheduled meet to bargain this week.

To Directly Access This Labor News Story, Go To: https://nwlaborpress.org/2019/03/a-picket-line-of-union-dentists/