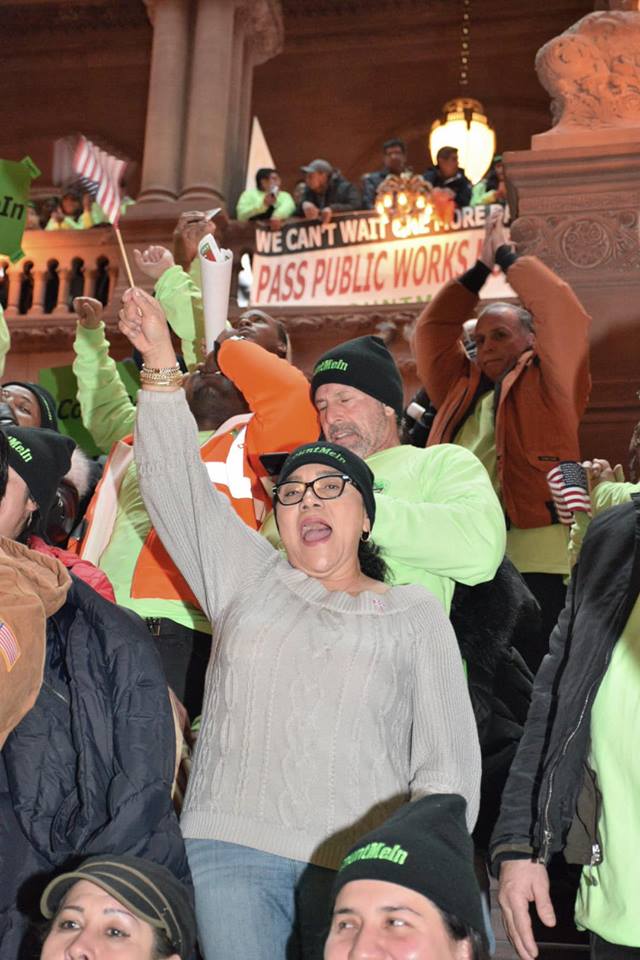 (ALBANY, NEW YORK) - Despite the valiant efforts of the New York State Building Trades, with help from the New York State AFL-CIO and a major rally of Tradespeople at the State Capitol, State Leaders reached a budget agreement for fiscal year 2019 that failed to include the proper definition of Public Works.

Properly defining Public Works had been touted by advocates as a common sense reform to apply Anti-Corruption Protections and family-supporting Prevailing Wages to all construction projects that receive public assistance.

To protect taxpayers from wasteful spending and corruption, New York requires competitive and transparent public bidding by contractors on all Public Works Construction Projects.  Unfortunately, a loophole in State Law allows millions of taxpayer dollars to be spent without the anti-corruption and transparency demanded of traditional Public Work Projects.

Increasingly, economic development projects across New York State fall through this loophole, advocates said, which allows public money to bypass these safeguards as it goes to private interests.

Closing the loophole, they argued, by properly defining Public Work to include all projects supported with public money will provide much needed accountability and transparency in government spending.

However, they said, the measure’s opponents successfully muddied the water by spreading misinformation to suggest it would result in “huge” increases in construction project costs.

But the truth advocates says is this: Defining Public Works would reward both Workers and taxpayers, and not the wealthy and irresponsible contractors exploiting a flawed system.

Economists Frank Manzo, Alex Lantsberg and Kevin Duncan have said “the overwhelming majority of peer-reviewed research conducted over the last fifteen years forms the consensus view that construction costs ‘are not affected by’ Prevailing Wages.”

Sixteen other States across the country apply a more comprehensive definition of Public Work, which apply Middle Class Prevailing Wages.  Unsurprisingly, the doomsday scenario of huge cost increases and less development, which opponents have claimed would befall New York, has not materialized in these other States.

New York State Building & Construction Trades Council President James Cahill joined with New York State AFL-CIO President Mario Cilento in released the following statement just prior to the budget being revealed: Restoring the Constitutional requirement that the Prevailing Rate be paid to Workers on publicly-funded construction projects is a priority for the New York State Building and Construction Trades Council and has the full support of the New York State AFL-CIO.  This issue needs to be included in this year’s State Budget so that taxpayers can be confident we are creating Middle Class Jobs for New Yorkers when public funds are used.  To expedite that process, we support discussions to address affordable housing and establish reasonable thresholds for projects financed by IDAs and LDCs, or as an alternative, to allow the Department of Labor to continue to be a part of that process.

Hundreds of Construction Workers, decked out in orange and yellow, filled the state Capitol Building in the waning days before the budget was announced in a final push, shouting: “End corporate welfare, pass Public Works!”

While the New York State budget was a missed opportunity, the New York Foundation for Fair Contracting - a non-profit organization established to “level the playing field’ in Public Works Construction for the benefit of taxpayers, responsible contractors and Workers, said it looks forward to when all taxpayer-funded construction goes to the lowest responsible bidders, not the most politically well-connected contractors.