This Is What Happens When You Vote Republican: Emergency Rule Prevented Last-Minute Protests At The Kentucky Capitol - Protesters Would Have Had To Submit An Application 10 Days Beforehand 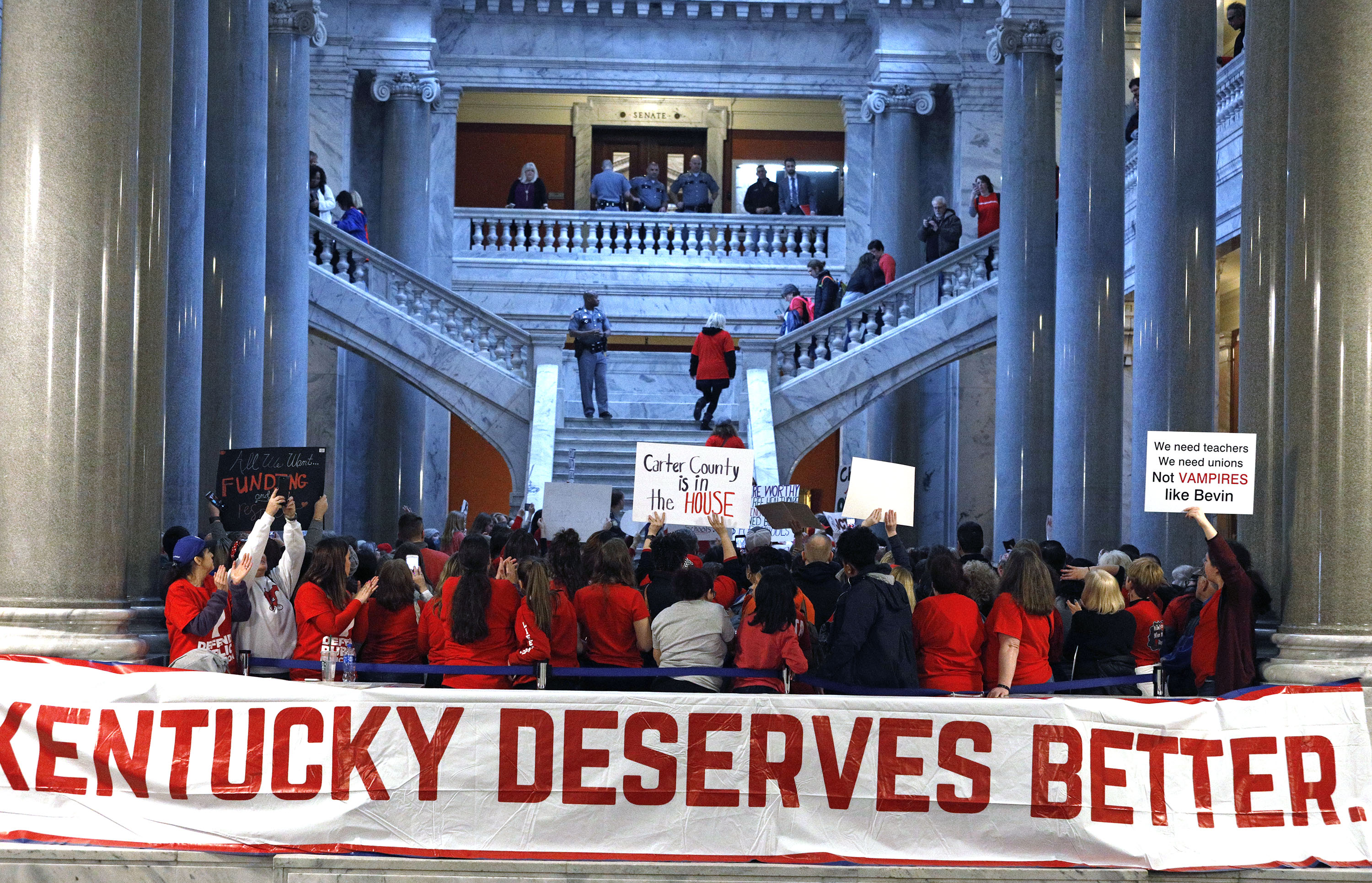 (FRANKFORT, KENTUCKY) - Thursday was the last day of the Kentucky General Assembly, with decisions still looming on several high-profile bills, but if you wanted to show up at the Kentucky State Capitol and protest, you were turned away.

According to an Emergency Regulation put in place by Republican Governor Matt Bevin Administration in January, any person or group wanting to protest at the capitol needed to submit an application 10 days in advance.

But surprise, surprise - the rules regarding capitol access are different for lobbyists.

The Emergency Regulation puts tighter restrictions on access to all State-owned facilities and grounds, including the State Capitol Building in Frankfort.

Those restrictions apply to visitors, but lobbyists are paid to be at the Capitol year-round.

Attorney General Andy Beshear issued an opinion last month that said the Emergency Regulation is invalid because it doesn’t state the nature of the emergency.  Beshear pointed out the new rule was instituted on the eve of the 2019 General Assembly session. “What this administration tried to do ‘is prevent it from being challenged until after the session was over,’” he told WKU Public Radio.  Beshear’s opinion also said language used in the regulation might violate the Kentucky Open Meetings Act and is vulnerable to Constitutional challenges.

A statement from the Governor’s Communications Office said Bevin would continue to issue orders that protect the safety of State Employees and the general public, and accused Beshear of issuing opinions to further his run for governor this year.

John Schaaf, the Executive Director of the Kentucky Legislative Ethics Commission, said because lobbyists are at the capitol year-round, they can give information to lawmakers at a moment’s notice to strengthen their clients’ position.  “That’s a big advantage that a lobbyist, that a paid lobbyist has over the average citizen who has a job back home in Bowling Green or Pikeville and they can’t come to Frankfort like a lobbyist can on a daily basis,” he said.

Schaaf said groups that employ lobbyists have to pay a registration fee.  They also have to report what their lobbying activity will be, bill numbers they’re interested in, or describe the legislative action they’re lobbying on.  Schaaf said lobbying groups also have to report if they’ve spent any money, how much they paid their lobbyists, and any events they invited legislators to.  He said last year more than $23 million was spent on lobbying in the Commonwealth.

“So, lobbying is a ‘pretty big business’ in Kentucky - as it is in most States,” he said. “Because many businesses and organizations have decided ‘that it’s very important to have somebody on the scene tracking legislation.’”

Opponents of the Emergency Regulation worry it could eliminate the ability of groups to quickly mobilize and go to the State Capitol to protest controversial legislation.

Bevin’s Emergency Regulation came after large groups of Public Educators showed up on short notice at the capitol to protest the Pension Law in the last legislative session.

To Read This Labor News Story In Its Entirety, Go To: www.wkms.org/post/emergency-rule-prevents-last-minute-protests-kentucky-capitol?fbclid=IwAR1Gp76W3A_GNYXZd6K7BtIeRGJJVr7lp3w3a2CTtldRqd-8kb-DddBUxFU#stream/0