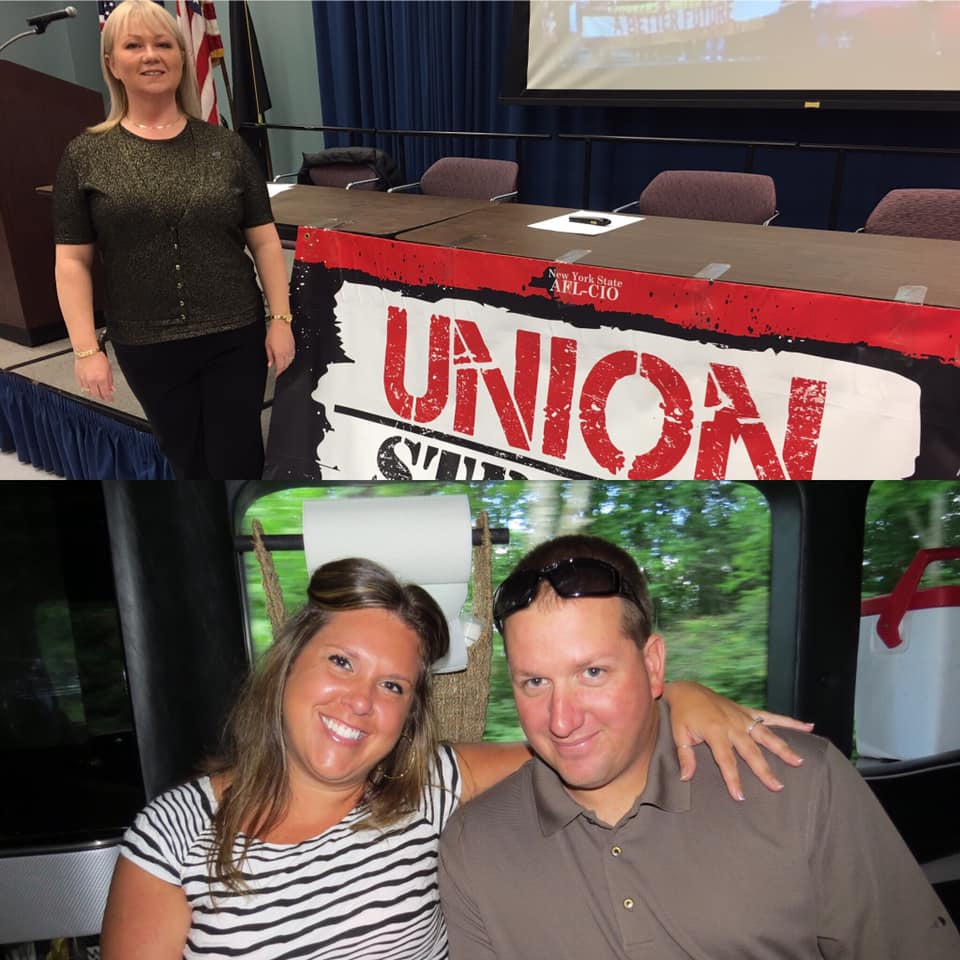 WNYLaborToday.com Editor’s Note: This is the second of two Western New York Labor News Stories this week that focus a spotlight on area Union Members running for Public Office.  Today, Your On-Line Labor Newspaper takes a look at United Steelworkers (USW) 2001 Member Amanda Irons-Rindfleisch and International Brotherhood of Electrical Workers (IBEW) Local 2104 Member Trevor Ganshaw (both pictured above – Ganshaw, with his wife, Nicole).  Irons-Rindfleisch is running for a seat on the Pendleton Town Board in Niagara County, while Ganshaw is running for the 10th District seat on the Niagara County Legislature.  (WNYLaborToday.com Photo)

(NIAGARA COUNTY, NEW YORK) – “If not you - then who?” - it’s a question that’s being answered by several Western New York Union Members, who’ve made the decision to change things for the better for Working People by running for public office.

In Niagara County, there are two Union Members who are campaigning: United Steelworkers (USW) Local 2001-represented Niagara County Sheriff’s Department Investigator Amanda Irons-Rindfleisch, for a seat on the Pendleton Town Board, and International Brotherhood of Electrical Workers (IBEW) Local 2104 Member Trevor Ganshaw, who is running for the 10th District seat in the Niagara County Legislature.

For both, it’s the first time they’ve run for public office.

The 36-year-old Ganshaw, who serves as his 220-Member Union’s Executive Board Chairman and who’s been a Union Member for 17 years, is running as a Republican in the heavily-weighted GOP 10th Legislative District - which might raise the eyebrows of some Unionists across the region, unless they understand where he’s coming from.  The District’s voter makeup is this: 4,700 registered Republicans and 2,800 registered Democrats.

“I’m running in the June Primary and ‘you can’t win (in this District) if you’re not’ Republican,” Ganshaw told WNYLaborToday.com.  “My family owns a farm and I’ve worked there for years.  They’re ‘real’ farmers ‘and we’ve always been’ Republican, since I was (18).  I’ve ‘grown up’ as a Republican, ‘but I really don’t care about parties.’  ‘I’m more in the middle.’  I ‘support’ the Second Amendment ‘and gun control too.’  I ‘support’ the Middle Class ‘and I vote’ Labor.  There are ‘a lot of good Union People who are registered Republicans, who support their Unions (100%).’  ‘Whatever is best for me and my Union Brothers and Sisters.’  ‘We need’ Unions for the Middle Class.  ‘If not, everything’s gone.’  ‘And that’s what kills me about politics in Niagara County, you’re told who to vote for, which is asinine to me.’  I want the ‘common good’ - ‘if you go all the way to the Left or to the Right, nothing gets done.’  ‘I’ll do what’s best for the county - there are ideas on both sides that are good.’”

Irons-Rindfleisch has been an Investigator with the Niagara County Sheriff’s Department since 2012, after serving as a Deputy from 2005 to 2017.  She was awarded the Sheriff’s Distinguished Service Award in 2013 for her role in an investigation into a major Welfare Fraud case that resulted in recovering more than $180,000 in cash, 29 arrests and 38 agreeing to settlements in lieu of charges.  And she’s been honored multiple times over the years for her work as a Deputy when she was assigned to the Niagara County Drug Task Force. 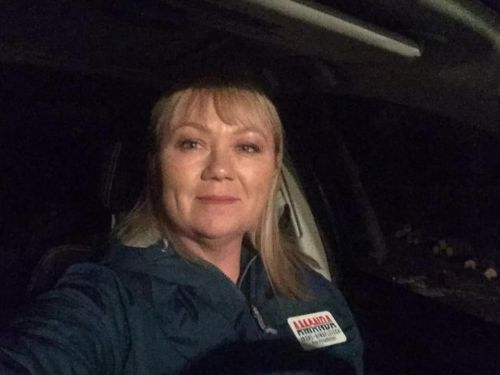 A graduate of Niagara County Community College and Niagara University, Irons-Rindfleisch’s background in volunteering for community work is quite simply - amazing.  She serves as the Vice-Chair of the Town of Pendleton Conservation Board, as Co-Chair of the Advisory Council of the YWCA of the Niagara Frontier, is an Executive Board Member of the Niagara County Department of Sheriff’s Police Benevolent Association (PBA), and is the Vice President of Membership for the United Way’s Women United arm. Her past service includes being a Volunteer Hospital Advocate for Erie County Crisis Services, as a Disaster Preparedness and a Health and Safety Instructor for the Red Cross, and a member of AmeriCorps. 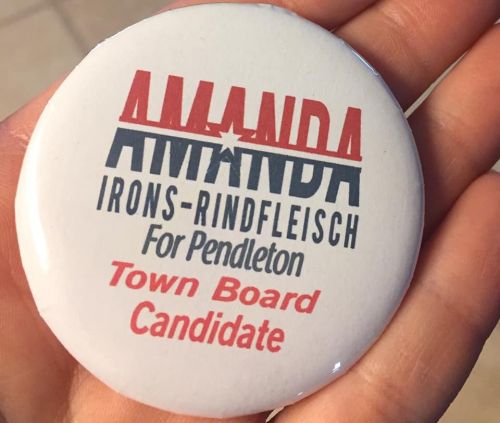 “I ‘love’ this town,” said the 39-year-old Irons-Rindfleisch, who’s lived in Pendleton since 2010 and whose husband, Patrick, is a Niagara County Sheriff’s Deputy who is also represented by the USW.  The couple have a daughter, Ava, who is nearly five.

“The town’s population is (3,000) ‘and it is primarily’ Republican - ‘but I truly believe I can do something to bring about positive change.’  ‘I’m ready to help lead Pendleton into a future where every resident has a voice and that all age groups are represented.’  We ‘need to attract smart, sustainable businesses that pay fair wages that will help grow our local economy.’  ‘I have a job to do and I’ll get it done with my best ability.’  ‘I’m viewing this as an opportunity to make a real difference and that’s why I’m going for it,’” she told WNYLaborToday.com.

A resident of the Town of Cambria, Ganshaw - who has an 18-month-year son, Hunter, with his wife, Nicole (pictured below) - said he was inspired to run for public office after the re-election of area U.S. Congressman Chris Collins, who’s been charged with a felony involving insider trading. 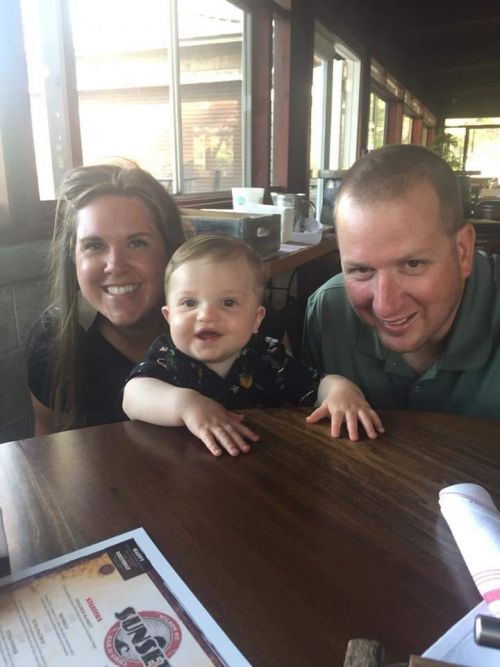 Despite the charges, the voters of Collins’ Congressional District returned Collins to office in the November Election.

“That ‘really pissed me off,’” Ganshaw told WNYLaborToday.com.  “He ‘got indicted and he’s going to jail - and he got re-elected.’  ‘That’s why you just can’t vote on party lines.’  ‘We need people in public office who tell the truth, including right here in Niagara County.’”

“(Republican Legislators) ‘used it as a ploy to get the county’s Public Employees Union to recertify their Members.’  ‘They wanted to use Janus to try to break the Union,’” he said.

Ganshaw believes he can do a better job, because just like many of those voters who live in the 10th District, he is a farmer and can relate to what they’re going through.

“I work on a farm ‘and I know farmers are not’ Anti-Union - ‘and they don’t hate me because I’m Union.’  ‘It goes back to county government being accessible to its residents.’  I live in (the Town of) Cambria, which just passed an ordinance that makes business harder for wineries.  ‘I’m just fed up.’  ‘That’s why I ran and I think I have enough support and backing to make a difference,’” he said.

“‘A lot of positive responses.’  Most people have told me: ‘God bless you.’  Like I said, ‘I love this town’ and ‘I believe we need to keep up with our growth, but listen to what our residents have to say about it.’  ‘We need to work together as we seek solutions and I will continue to advocate to bring us together.’  ‘I’ve learned that you can change how a person feels about their situation and themselves just by listening to them and showing you care.’  ‘That lesson has stayed with me and will be a central component to my campaign,’” Irons-Rindfleisch told Your On-Line Labor Newspaper.

Said Ganshaw: “Those who I’ve talked to ‘are very supportive.’  ‘Many tell me they just don’t know what the County Legislature does.’  ‘That every election, there is only one candidate and nobody else they can vote for.’  The ‘Incumbent Republican has run unopposed during the last three elections - but now, there is.’  It’s a ‘grassroots effort, but I am working my ass off.’  I have a son who’s approaching his second birthday ‘and he’s another reason why I’m running.’  ‘I want to make it better for him.’”

While both are political neophytes, Ganshaw and Irons-Rindfleisch told WNYLaborToday.com they would recommend to other Union Members and Union Leaders to move on their thoughts of getting involved and run for public office.

“I’ve ‘recommended to other Union Members to run,’” Irons-Rindfleisch added.  “I’m ‘telling Union Members and women they need to run’ - ‘normal’ people ‘need to run.’  ‘We have the background and the guts to do it.’”