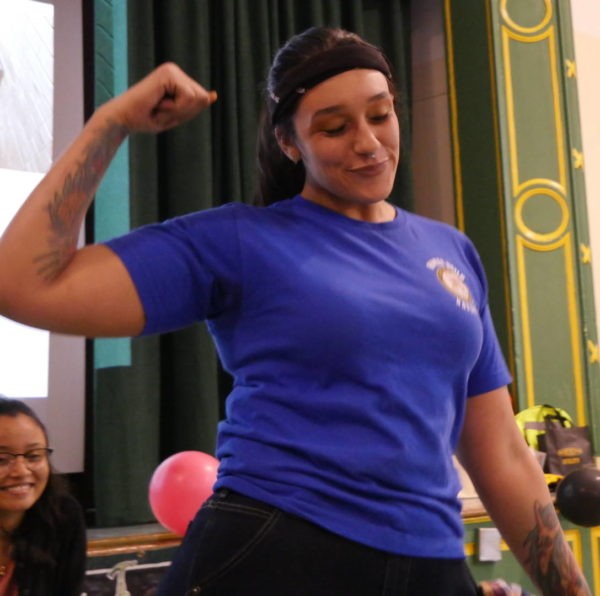 (NEW YORK CITY) - If you are at all interested in seeing the Trade Union Movement build strength and expand diversity, the stubbornly single-digit figures reflecting the overall percentage of women presently working in the Building Trades still have some way to go before they start inspiring backflips in anyone - but there’s another unofficial metric out there that clearly demonstrates exciting things are, indeed, happening.

Take, for example, Laborers Local 79 Member John Montanez.  He’s been in the Union for two years, is currently working on a big Citibank project and couldn’t be happier about it.

One of the main reasons for John’s exceedingly high level of job satisfaction is that he gets to work alongside his 30-year-old sister Yesenia Aleman on the same job site.

You see, Yesenia is the one that convinced her brother to follow her into the Union.

“It’s ‘cool.’  ‘He’s got my back, I got his,’” the seven-year Journeywoman recently told LaborPress. “We ‘go the extra mile and push each other, making sure we don’t get hurt and we stay safe.’”

Come October, the International Brotherhood of Electrical Workers (IBEW) Local 3 Electrician will mark her eighth year as a Trade Unionist.

Irving fondly remembers being a kid and regularly attending the New York City Labor Day Parade with her Sheet Metal Worker Dad and later, becoming part of NEW - Nontraditional Employment for Women - where she learned enough about the Building Trades to know exactly what she wanted to do after high school.

“Once I graduated high school, ‘I didn’t want to take out student loans, so I decided the Trades would be a great career for me,’” Irving told LaborPress. “And with (Local 3), ‘they actually help us gain a college education.’  ‘I decided (Local 3) would be the best fit for me.’”

At NYCCWC’s first-ever career fair and fashion show that was recently held at the Bronx School of Design and Construction, Rambo talked about the profound impact women have already had on the Building Trades.

“We’ve ‘got boyfriends and girlfriends in the Trades, we’ve got husbands and wives in there’ – ‘I know that means something’s happening and the culture is changing,’” Rambo said. “The younger generation ‘is really kind of open - they don’t have the same limits that my generation had on them.’”

Aleman and Irving were both part of a much larger group of Tradeswomen doing jobs as Electricians, Sheet Metal Workers, Plumbers, Laborers and Firefighters, who took part in the NYCCWC career fair and fashion show  - a fun and creative way to show young girls what women in the Building Trades are really like.

“We ‘want’ young girls and women ‘to understand that there are career opportunities with the Building Trades, to let them know that there’s a lot being offered - and there’s a lot of us out there doing it,’” Rambo said. “Young girls ‘tend to not know this is an option.’  ‘They’re not really taught it - they don’t think about it.’  ‘And, sometimes, it’s hard to do something and be something if you don’t see someone doing it first.’”

To Continue Reading This Labor News Report, Go To: http://laborpress.org/building-tradesmen-are-welcoming-sisters-daughters-girlfriends-and-nieces-into-the-ranks-and-its-inspiring-more-girls-to-follow/

Wonderful story! 'Absolutely, there is a demand for women in the Trades via State Indentured Apprenticeship Programs - and a dramatic need for the infusion of younger people.' 'Youth is needed to fill the shoes' of those Baby Boomers who are retiring. Posted by Dan Boody on March 30, 2019 at 8:13 pm