While We All Know About The Triangle Shirtwaist Fire, Did You Know About The 1913 Binghamton, New York Factory Fire? Thirty-One Died In The Fire And It Put Even More Pressure On NYS To Strengthen Life Safety Codes 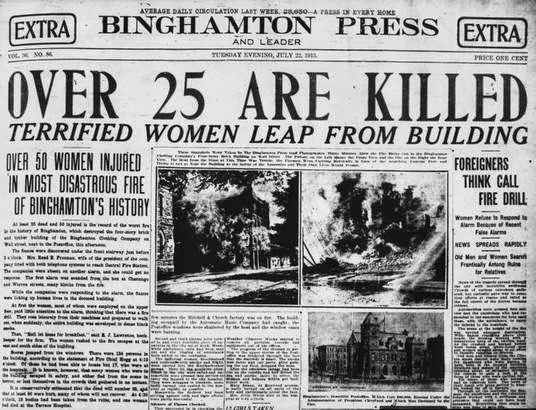 This week, the 108th anniversary of the Triangle Shirtwaist Fire in New York City was observed.  That tragedy took the lives of 146 young Immigrant Garment Workers, mostly women, and - in the process, galvanized a reform movement to raise safety standards for Workers.

As I read the reports out of Greenwich Village where Unionists and relatives of those who perished gathered to repeat the refrain of “We Will Never Forget!,” I ran across a story on the Internet of another fire that occurred just two years later, in Binghamton, New York, that took a great amount of life and put even more pressure on New York State to strengthen its safety codes.

I was surprised to learn of this fire and its repercussions, because – frankly, I had never seen anything written about it over the years.

I found this story on NewYorkUpstate.com’s website – it was written by Johnathan Croyle of syracuse.com and headlined: Binghamton Is Draped In Mourning' - Remembering The 1913 Binghamton Clothing Fire.

WNYLaborToday.com presents it to you now, so that we – as Union Members, do not forget what happened in Binghamton on that July 22nd, 1913:

"Binghamton is draped in deepest mourning, anguish pervades, and the municipality stands before the world a victim of one of the tragic events which now and startles humanity," the Elmira Telegram wrote on July 27th, 1913.

Five days before, the City of Binghamton had suffered through one of its most tragic days.

A clipping from the July 24th, 1913 New York Press shows flames at the Binghamton Clothing Company.

In 1913, the Binghamton Clothing Company operated out of a four-story building in the heart of the city.

It was known around town as the "overall factory."

The day was hot and sticky, temperatures approached 95 degrees.

The building hummed with the sounds of cutting and stitching machines.

It was estimated that about 110 Workers, mostly women, were there after lunch.

Most, about 80, were working on the factory's top floor.

Because of the heat and humidity almost all the doors and windows in the factory were open, to allow a strong breeze to blow through.

Many of the Workers had stripped down to their undergarments to try to keep cool.

In the wake of the Triangle Shirtwaist disaster, fire drills were a common occurrence.

It was thought the Workers of the factory could clear out of the building in less than a minute.

To Continue Reading This Labor News Report, Go To: www.newyorkupstate.com/southern-tier/2018/07/binghamton_is_draped_in_mourning_remembering_the_1913_binghamton_clothing_fire.html