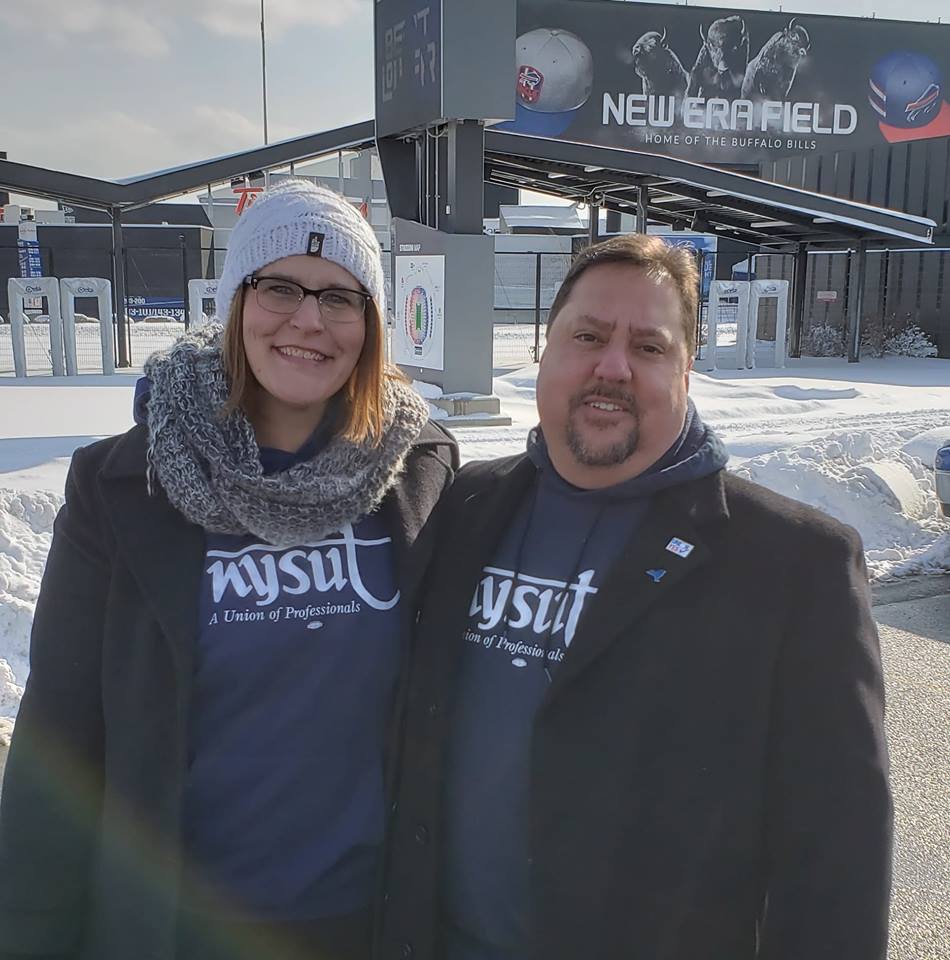 (WEST SENECA, NEW YORK) – “If not you - then who?” - it’s a question that’s being answered by several Western New York Union Members this year, who’ve made the decision to run for Public Office in 2019.

Here in Erie County, two represented by the New York State United Teachers (NYSUT) Union - Democrats Nicole Herkey and Joe Cantafio (pictured above), have made that decision and are both running for four-year terms on the West Seneca Town Council.

Herkey, 43, is a West Seneca resident who’s lived in the town for the past 22 years.  She’s employed as a Support Reading Teacher at Public School 89 in the City of Buffalo, where she’s worked for the past 12 years.  And, as a Union Member with the NYSUT-affiliated Buffalo Teachers Federation (BTF), she’s also has been a BTF Executive Board Member for the past three years. 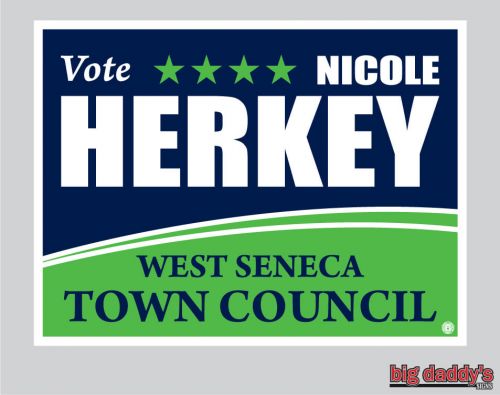 Cantafio, 47, is President of the 550-Member West Seneca Teachers Association, which is also affiliated with NYSUT, as well as the National Education Association (NEA).  Cantafio has been a High School Teacher in the West Seneca School District for 25 years and as a Coach in the District for a total of 30.  Recently named the 2019 West Seneca Chamber of Commerce’s Citizen of the Year, Cantafio also serves as a Vice President of the Western New York AFL-CIO Area Labor Federation (WNYALF).  He also played a high-profile role recently, serving as the spokesman for Organized Labor’s fight to keep the New Era Cap Company’s Town of Evans Sports Cap Manufacturing Plant open in an effort to save the jobs of more than 200 Workers. 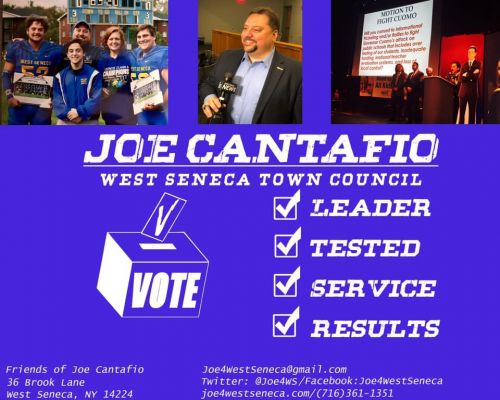 “It’s kind of a ‘NYSUT pipeline thing,’” joked Cantafio - a NYSUT At-Large Director and NEA State Delegate, referring to his Union’s superlative track record of the political training it offers its Members across New York, and its Members subsequently making the decision to run for public office over the years.

“There’s an ‘old saying, that if not you - then who?’  I’ve ‘been asked to run for years.’  ‘It was time to either put up or shut up.’  I ‘live’ here.  I’ve ‘raised’ my family ‘here.’  I’ve ‘always cared about’ West Seneca,” said Cantafio - who has also given of himself by volunteering and playing a major role in several local cancer fundraising efforts, including Unions Against Cancer and Breast Cancer Awareness, which has impacted several Co-Workers and friends. 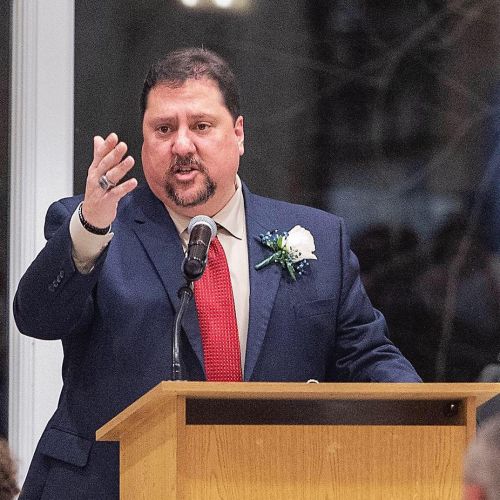 “There ‘are a lot of very angry voices out there’ when it comes to taxes and our budget,” he told WNYLaborToday.com.  “I ‘want to tap into people’s anger.’  ‘Too many people are just complaining.’  ‘I won’t say I have all the answers.’  ‘We need people who will listen, people who genuinely want to serve, people who bring solutions.’  And we ‘need to elect people who will bring people together.’  ‘Over the years, I’ve been able to bring people together in a collaborative way and I expect people to be given a fair shot.’  I see this as ‘another way to serve.’”

“I ‘want to work for’ the residents of this community ‘and use my voice to do so.’  I ‘hadn’t thought about’ running, but was asked to and consider it,” Herkey told Your On-Line Labor Newspaper.  “‘I think I will bring a different perspective’ (to the Town Council) as a Teacher and Educator, and as a Union Activist.  ‘I want to make sure there are resources for our young people and our older residents.’  I ‘want to address taxes since there have been increases over the past several years and I want to make sure we maintain services.’  ‘So far, I’m getting a lot of positive responses from my fellow West Seneca residents.’” 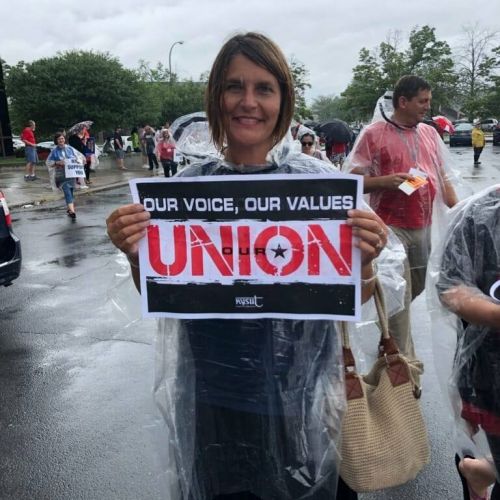 Cantafio says the experience he has gained as a Union Leaders, including “negotiating (contracts) at the table” and then “selling it to the Membership” as head of the West Seneca Teachers Association, has been invaluable.

And, he says, it also taught him to not only look out for his Membership, but also for the West Seneca Community.

“We ‘came up with great solutions’ (at the bargaining table), including self-funded health care, ‘which was good for the Membership and taxpayers,’” he said. “I’m ‘not afraid to deal with both sides.’  ‘You don’t have to negotiate in an adversarial way.’  ‘I’m not the one who slams my fist on the table.’  ‘I’ll work with anyone.’  ‘It’s always a give and take.’  ‘If we do, we’ll come up with a win-win’ (situation for both sides).”

When asked what the reaction has been from voters as they both knock on doors of local residents, Herkey and Cantafio - whose wife has recovered from a catastrophic aneurysm that had doctors telling him she wasn’t expected to live – both say the response has been “positive.”

“In fact, ‘it’s been very positive,’” said Herkey, who husband, John, is a local Verizon Lineman represented by Communications Workers of America (CWA) Local 1122.  The couple have three children, two boys – age 20 and 18, and a daughter, age 14.

“I’m a Teacher, ‘not a politician.’  People ‘are looking to hear another opinion and I haven’t received any negative feedback,” she told Your On-Line Labor Newspaper.

Meanwhile, Cantafio - whose father was a 40-year United Auto Worker (UAW) Member, says his reply to those who ask if he’s a Union Guy is:  “They ‘never ask you if you’re a business guy.’  I’m ‘not running as a Union Guy.’  ‘I’m a Union Man,’ but ‘it’s Unions that have built this country.’”

Despite the fact their campaigns kicked off less than several weeks ago, Herkey - who is also a NYSUT Seated Delegate and an elected American Federation of Teachers (AFT) Delegate, as well as a Delegate to NYSUT Retiree System - and Cantafio both agreed, saying they would indeed recommend to their fellow Union Leaders and Members to seriously consider making a decision to run for public office.

“I ‘would absolutely recommend it,’” Herkey said.  “That’s ‘why I am active in my’ Union.  If ‘there was a problem, I looked to find a solution.’  ‘I don’t believe in complaining.’  ‘I just want to fix things.’  ‘People have believed in me and I believe I offer something - and anyone who has the same to offer can do so too.’”

Cantafio - whose Campaign Manager is Mike Deely, NYSUT’s Regional Director, agreed, reiterating once again: “For years I was ‘asked to run.’  ‘Now my kids are off to college and if not me, then who?’  ‘It was time to either put up or shut up.’”