The 2019 WNY Area Labor Federationâs Annual Meeting: Reviving The Labor Movement By Focusing On Organizing âAllâ Workers & âLaying The Groundworkâ For An Eventual Change Of Leadership At The Area Labor Fed 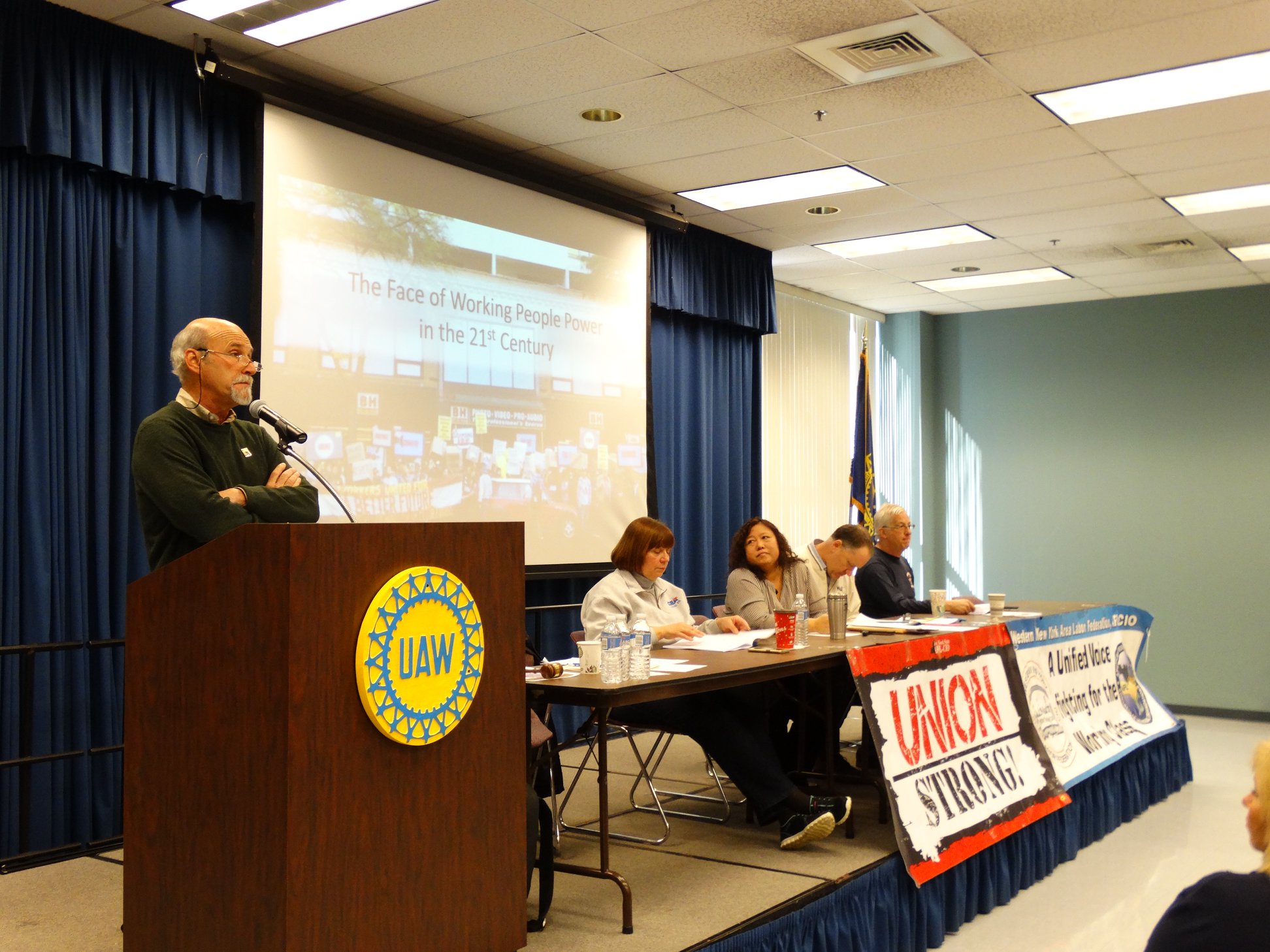 (WILLIAMSVILLE, NEW YORK) – Reviving and continuing to grow the Labor Movement by focusing on organizing all Workers and laying the groundwork for an eventual change of leadership at the Western New York AFL-CIO Area Labor Federation (WNYALF) were the highlights of the WNYALF’s 2019 Annual Meeting held Saturday (March 23rd) at the United Auto Workers (UAW) Regional Union Hall in the Buffalo Suburb of Williamsville.

More than 200 area Labor Leaders, Union Delegates, Elected Officials and Friends of Labor packed the UAW meeting room where those in attendance were enlightened by United Steelworkers (USW) National Organizing Director Maria Somma, who declared: “Janus ‘be damned, we need to go after (organize)’ people ‘who like’ Unions.”  They also listened to a series of reports delivered by the heads of the Federation’s five Central Labor Councils: Buffalo, Niagara-Orleans, Dunkirk, Jamestown and Cattaraugus-Allegany - whose Affiliated Member Unions combine to represent 140,000 Union-Represented Workers.

WNYALF President Richard Lipsitz (pictured above speaking at the event) spent a good portion of his yearly address discussing the “outright attacks by the (Republican President Donald) Trump Administration on all things that advance and protect the interests of Working People and their economic and social organizations.”  Lipsitz also spent time listing the many positives and victories that occurred during 2018 - as well as addressing the future of Western New York’s Labor Federation.

“It is safe to say there’s ‘never been a more concerted and thorough attack on’ American Democracy ‘than what we’ve seen in the past two years and three months.’  Trump and his administration - enabled by a ‘complicit’ Republican Party, ‘opposes the most fundamental rights’ of the American People, ‘including any guarantees to’ health, education, housing, employment, clean water and air - ‘and the precious right’ to vote.  And he’s ‘especially taken aim at the people of Asia, Africa and Latin America.  His administration ‘at best perverts’ science ‘and at its worst denies’ science altogether.  ‘Furthermore, and perhaps most importantly, Trump and his group are pursuing a path aimed at splitting the Working People on the basis of race, ethnicity and gender, and rewriting the Constitution at the same time.’  ‘He is pushing this program through the most tyrannical of methods: Full-throated propaganda of lies spewed everyday by his minions in the Right-Wing Media,’” Lipsitz said.

“The ‘real question is how do we continue to defend ourselves against this onslaught while simultaneously preparing to take the offensive and make a positive change in our living standards and working conditions?’  The first, ‘most concrete and obvious antidote to this offensive is simple: Build the solidarity movement on the basis of an injury to one is an injury to all, and, organize the unorganized.’  ‘Now more than ever before, there’s really no other way to affect the class struggle.’  Trump ‘is removing guarantees and Pro-Worker Regulations as quickly as he can.’  ‘The truth is that a hostile administration can remove regulations that help the Working Class.’  ‘Only a Collective Bargaining Agreement is a guarantor of wages, benefits and conditions in the face of this onslaught,’” the WNYALF President said. 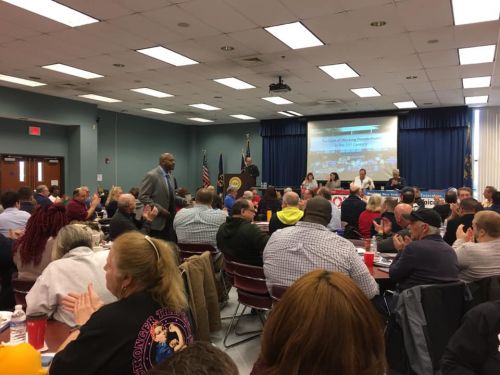 After going through a number of positives and victories for the Western New York Labor Federation in the past year, the 68-year-old Lipsitz - who has served 7.5 years as WNYALF President and whose current three-year term expires in 2021, said: “I ‘want to turn to a personal’ matter.  2018 ‘was a very difficult year for my family.’   My mother and father died within three months of each other.’  Such events ‘are cause for great thought and consideration about one’s own career and mortality.’  ‘We have built a fine organization at the WNYALF, one that has a very talented and committed staff.’  We have a program ‘with depth and scope that few Federations in the country can match.’  ‘Finally and most importantly, our unity is ironclad and our determination is strong.’  ‘I intend to finish my term, but it would be foolish to say that we should not take preparations for succession during these two years to come.’  ‘The time will go quickly.’  Therefore, the WNYALF ‘will be serious in evaluating our strengths and weaknesses and making necessary changes that will insure we play a strong role well beyond the next two years.’  ‘No one gets a choice as to when they enter this world, but everyone must decide how to use the time they are given.’  ‘I will do my best to insure we work together in the great cause of the Working People now and far into the future.’”

Meanwhile, USW National Organizing Director Somma (pictured below) used a power point presentation to illustrate and drive home her point of the need for Organized Labor to organize Workers of all backgrounds if it is to rebuild Union Density across the country. 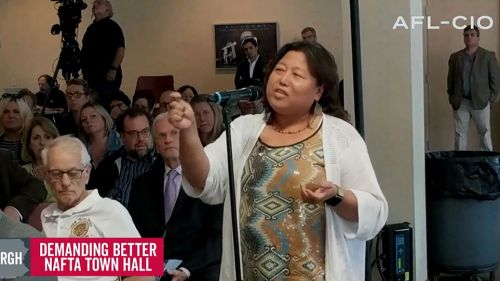 She also said the Janus decision “be damned” - the U.S. Supreme Court ruling that allowed Workers to opt out of paying Union Dues for representation in the workplace, but still are required Unions to represent them - and that Unions need, based a recent and positive Gallup Poll result, to organize Workers “who like Unions.” 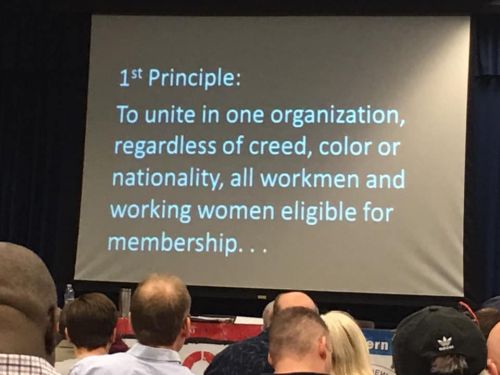 “We ‘are the only stopgap measure to protect Working Americans, and with those who want to decimate and destroy us, so much is on our shoulders,’” Somma said.  “So, ‘what do we do?’  We ‘must build partnerships to build power.’  The ‘good news is people want’ Unions - young people ‘are the most likely to support’ Unions.  ‘We have to go after people who like’ Unions.” 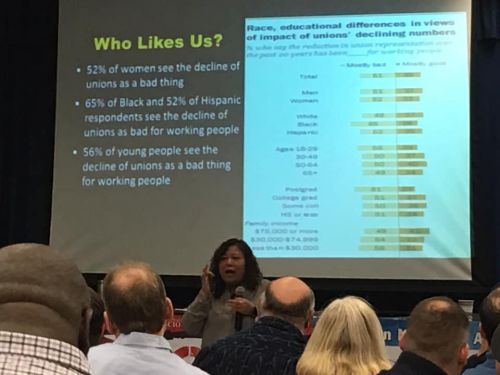 Somma used her power point to project photos of several groups in action that are pushing for reform and change, including the #MeToo Movement, Black Lives Matter, young students who protest for gun control and those who are concerned about our Immigration System. 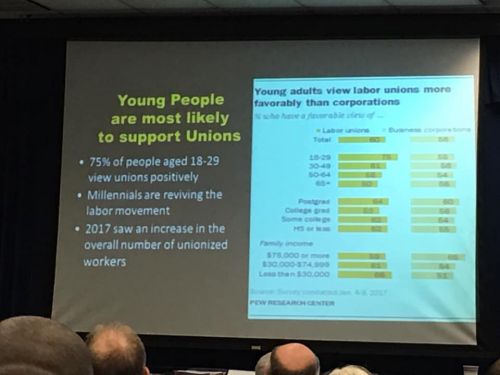 “Who ‘should we stand next to’?  ‘All these people have something in common.’  They’re ‘Workers.’  ‘So we need to change the debate.’  The Labor Movement is about ‘all’ Workers and these Workers are ‘all eligible for (Union) Membership.  ‘We have to go back to our roots.’  (Organized Labor) ‘will not exist without these others.’  What the Labor Movement ‘does is for the common good.’  There are (11 million) Undocumented Workers.  ‘It’s time for these community groups and Organized Labor to come together.’  ‘Gone are the old ways, we must change.’” 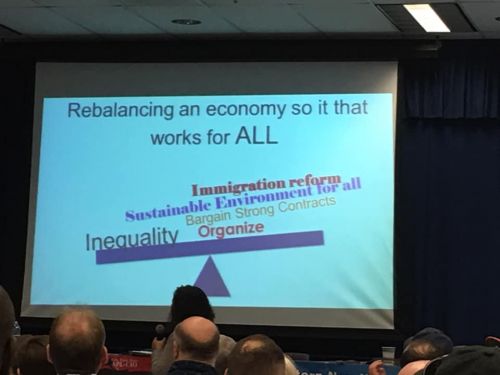 In addition to Lipsitz’s main address and Somma’s presentation, those in attendance were provided with an update on the USW and International Brotherhood of Electrical Workers’ (IBEW) combined efforts to organize Workers employed at Buffalo’s new Tesla Plant. 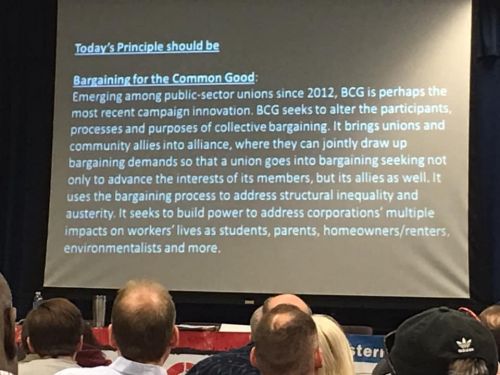 “We ‘have to organize in a new way,’” said USW District 4 Organizing Coordinator David Wasiura.  “That’s ‘why we pulled together a coalition that included the Clean Air Coalition and the Coalition for Economic Justice.’  This is a ‘turning point’ for Labor ‘and we need to get out in front of it - now!’  Even though we are a ‘Smokestack Union’ (the USW), ‘we’ll (also) be in Albany and other places to make sure there are Buy American Provisions” in our laws.

Niagara-Orleans AFL-CIO Labor Council President Jim Briggs, who serves as Sub-District Director for the USW District 4, delivered a passionate summation, saying Organized Labor must turn things around for the next generation: “It’s ‘no longer layoffs, they’re now coming after us through attrition’ (choosing not to fill open jobs).  ‘We must stop them from taking away this path of prosperity)’” for those yet to come.

Lipsitz also made those in attendance aware of the big 2018 election victories for Organized Labor and the Democratic Party across the U.S. (most notably turning 42 Congressional Seats Blue in November 2018) and making New York State Government “totally Blue.”

In addition, he signaled out two new affiliates with the American Federation of State, County & Municipal Employees (AFSCME)-represented Erie 1 BOCES (Boards of Cooperative Educational Services) and with the Screen Actors Guild‐American Federation of Television and Radio Artists (SAG-AFTRA), the recently-released Labor Takes the High Road: How Unions Make WNY More Prosperous and Equitable Study, and the public stance Labor took in the New Era situation, as well as the continuing situation at the Wendt Company.

“Among the ‘more important struggles’ of the past year is the ‘continuing contract fight’ at Wendt (in Suburban Cheektowaga).  The Ironworkers have been involved in a ‘significant corporate campaign’ for the last eighteen months.  While progress ‘has been made, this struggle is not yet a success.’  The WNYALF ‘will support in anyway deemed proper until a victory is achieved,’” Lipsitz said.

“The second is the campaign at New Era, where the Koch Family ‘has decided to bust’ the Union ‘and leave’ the Production Workers and the Evans community ‘out in the cold.’  They moved the product line to a Non-Union Facility in Florida.  ‘They did so in spite of their brazen admission that they are making money’ in the Derby plant.  Our Labor Movement is ‘disgusted by this high handed act of pure greed and we’ve made our displeasure known to the whole country.’  We have ‘been assisted’ by our community allies - especially the Coalition for Economic Justice, Major League Baseball Players ‘and the vast majority’ of our elected officials.  ‘Unfortunately, while we raised quite an uproar over this issue, the plant is in the process of closing, and the production in Florida will be greatly increased.’  ‘No one is happy about this outcome, and we will never forgive the Koch family for what they have done to our community,’” Lipsitz said.

Photos That Appear With the Labor News Report Were Taken By WNYLaborToday.com & Via The Facebook Pages Of The Western New York AFL-CIO Area Labor Federation & The Buffalo AFL-CIO Central Labor Council.