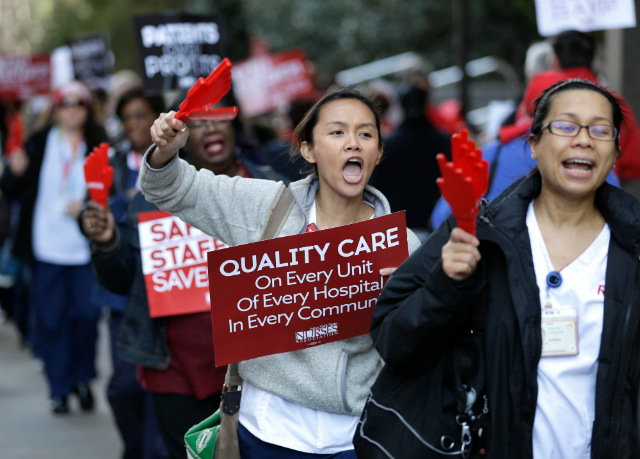 (NEW YORK CITY) - The threat of as many as 10,000 New York City Nurses going on Strike intensified earlier this week as Members of the New York State Nurses Association (NYSNA) rallied outside Mount Sinai Hospital in East Harlem.

The Union announced that nurses at Montefiore Health System, Mount Sinai Health System and New York-Presbyterian would Strike starting at 6 a.m. on April 2nd if those hospital systems do not agree to hire enough Staff to maintain minimum Nurse-To-Patient Ratios that NYSNA says are needed to ensure patient safety.

“After nearly thirty negotiation sessions, we still do not have a single item agreed upon,” NYSNA wrote in an e-mail to Members announcing the potential Strike date. “But it is management’s continued refusal to engage in a conversation about minimum Nurse-To-Patient Ratios that has led us to this moment.”

The NYC Hospital Alliance, which represents those hospital systems in their contract negotiations with the Union, clapped back the same day by filing a charge against NYSNA with the National Labor Relations Board (NLRB), alleging the Union is engaging in Unfair Labor Practices (ULPs) by unlawfully seeking to get hospitals to adhere to mandatory staffing ratios.

For years, NYSNA has been trying to get the New York State Legislature to pass a bill requiring hospitals and nursing homes to maintain certain Nurse-To-Patient Ratios, but has faced continuous pushback from hospital lobbyists who say that rigid staffing requirements would drive up costs without improving patient safety.

The Safe Staffing for Quality Care Act is still on the table in Albany and received vocal support from Governor Andrew Cuomo after it failed to pass during last year’s legislative session.

In the meantime, NYSNA has been trying to jump-start the process of increasing Nurse staffing levels at city hospitals through its ongoing contract negotiations with the NYC Hospital Alliance.

When NYSNA made a similar walkout threat during contract negotiations with the Alliance in 2015, a Strike was avoided when the hospitals agreed to hire more Nurses, even though they refused to agree to staffing ratios.

In its NLRB complaint, the Alliance says this go-round NYSNA has been “preconditioning negotiations over nurse staffing issues on the Alliance's acceptance (of the) principle of mandatory staffing ratios.”

The current standard practice is that “the Nurse Managers of individual hospital units assess staffing at the beginning of each shift to design tailored, flexible staffing plans to respond to patient needs,” a NYC Hospital Alliance spokesperson explained.

But some Nurses who spoke to The Gothamist said their hospital units are chronically understaffed, leading to unsafe conditions for patients.  “Most of the staffing really ‘isn’t safe on most of the units’ at the Children’s Hospital at Montefiore,” said Naomi Cordova, who has been working as a Nurse there for nearly 30 years.