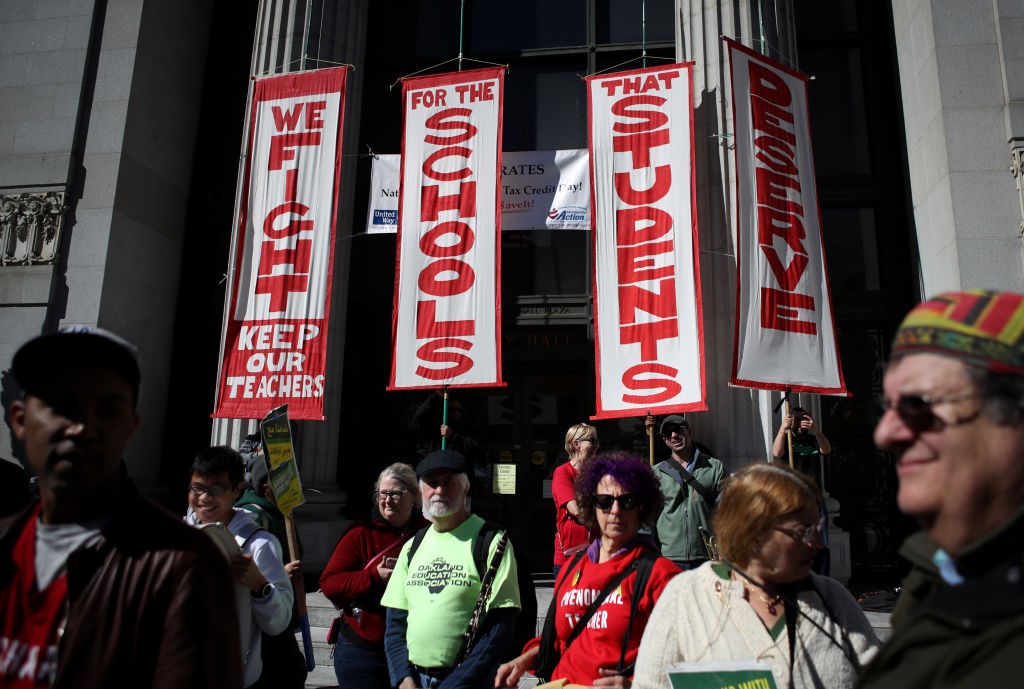 After decades of decline, the past year has seen a dramatic revival in Labor militancy.

Public School Teachers have been at the forefront of this resurgence, starting with a dramatic wildcat Strike in West Virginia in February 2018, then a wave of Teacher Strikes that swept the Nation, moving from Red States like Arizona and Oklahoma to Blue California and Colorado.

This is not the first time Teachers have taken mass, militant labor action in the United States.

The Strikes of the 1970s exacerbated tensions between mostly white Teachers and the Communities of Color they served.

Striking Teachers have also made clear that public education must be funded by re-appropriating the wealth of corporations and the ultra-rich, not by higher taxes or benefit cuts to Working People.

The legacy of these toxic conflicts was division among Working People, who should have been uniting to fight the opening salvos of austerity politics and neoliberal privatization.

The recent Teacher Strikes are significant because of the kinds of demands Teachers are pressing: Smaller class sizes; More Support Staff for students; and Ends to school closures and charter school expansion.

Teachers have won widespread public support for their cause by presenting demands on behalf of the entire Working Class and by building solidarity against a common enemy: the billionaires hoarding obscene wealth and trying to destroy public education.

Today, the Teachers’ victories are victories for the Working Class.

The solidarity being rebuilt through the current Strike Wave could be a seed of the kind of mass movement necessary to fundamentally reorder society - a movement of the Multi-Racial Working Class, fighting to democratize our economy and break the stranglehold of the ultra-rich over our political system.

As Historian Jon Shelton reports in his recent history of Teacher militancy in the second half of the twentieth century, Teacher Strike!, Teacher Strikes were common throughout the 1960s, but around the turn of the decade, the Strikes spiked dramatically, peaking at more than 200 in the 1975-1976 school year.

By contrast, there were only 300 Strikes throughout all of the ‘60s.

They also took on a more militant character, with Teachers engaging in illegal labor action and shutting down schools for weeks or months on end.

The first was the conflict, in the early part of the decade, between majority-white Teachers Unions and Black Power advocates, who pushed for greater community control of urban schools and wanted Teachers to shoulder more care-taking responsibilities.

The second was the fiscal crises many cities faced in the mid- to late ’70s, which forced city governments to reduce Public Employee payrolls and cut benefits.

To Continue Reading This Labor News Report, Go To: https://jacobinmag.com/2019/03/a-different-kind-of-teachers-strike-wave