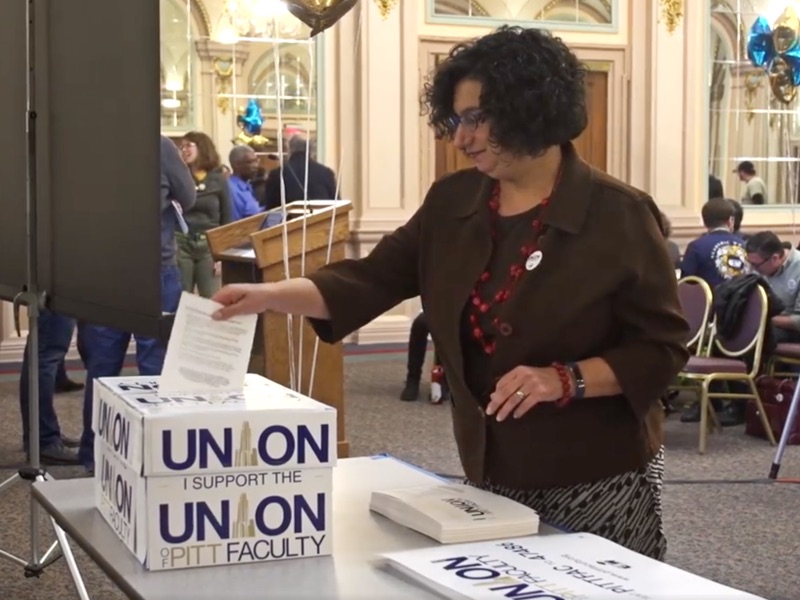 Faculty, Adjunct Instructors and Graduate Student Assistants on college campuses across the Nation are attempting to organize Labor Unions at an increasing rate, a trend that’s likely to continue, according to some Scholars.

Such movements are particularly strong among Grad Students, possibly because they tend to be more active in social movements, said Dr. Lois Weiner, a retired Professor of Education at New Jersey City University whose research has explored the global transformation of education and its effects on Teachers, students and Teachers’ Unions.

“They were the ‘first to start to organize against the degradation of teaching in the academy,’” said Weiner, an Independent Researcher and Consultant on Teacher Union Transformation. “And ‘that’s what we are seeing.’  The ‘degrading of teachers’ work in the academy.’  ‘That’s what all this organizing is about.’”

Grad Student Unions at Columbia and Brown Universities recently won formal recognition from administrations at those institutions, and Georgetown University is working with 1,100 Grad Student Assistants who voted in November for Union Representation.

Meanwhile, organizing efforts by their peers at the University of Chicago and Yale University have run into snags or outright administrative opposition.

Grad Student Assistants “barely make enough money to live on,” said Dr. Paula B. Voos, a Professor and Director of Undergraduate Programs in Labor Studies and Employment Relations in the School of Management and Labor Relations at Rutgers University, New Brunswick.

“Although it is a part-time job while they’re in school,” she said, “they ‘are not a wealthy group of people and they are doing a lot of teaching of undergraduates and in research labs.’”

An election petition has been filed that paves the way for more than 1,600 Full-Time and Part-Time Faculty at five University of New Mexico campuses to vote on Unionizing and Adjunct Faculty are organizing on campuses in California and elsewhere.

“Adjunct Faculty have been ‘hyper-exploited,’” said Weiner, “and ‘when that happens, people turn to Unions.’”

The various constituencies are organizing for many reasons, ranging from better pay, job security and a more productive work environment to a greater voice and more institutional transparency.

Similar organizing principles cut across all groups, but those of Adjunct Faculty and Grad Student Assistants are more closely aligned with each other than with Full-Time Faculty because of the nature of their work contracts, noted Dr. Sarah A. Robert, Associate Professor of Learning and Instruction at the State University of New York at Buffalo.

“Internationally, ‘what’s happening here is part of a larger global trend of organizing at all levels of education,’” particularly in the Public Sector, she said. “It’s an ‘exciting time’ in the U.S. ‘because suddenly we have Teachers using their power as Members of a Union to advocate for public education.’  It’s ‘not about’ the Teachers.  ‘It is about the continuing erosion of the conditions in which the Teachers work.’”

Full-Time Faculty, who by virtue of employment status have more benefits than Adjuncts and Graduate Students, are finding Unionization more attractive than they may have in the past as they feel the impact of “corporatization” and “Adjunctification” on higher education, said Weiner, who directed NJCU’s Urban Education and Teacher Unionism Policy Project.

To Continue Reading This Labor News Report, Go To: https://diverseeducation.com/article/139459/?fbclid=IwAR0_SdoiP0K3zKZaQ02r8MHPMscV3_p-Tgr5MLB00qbITnqemYCgrAuq-8w