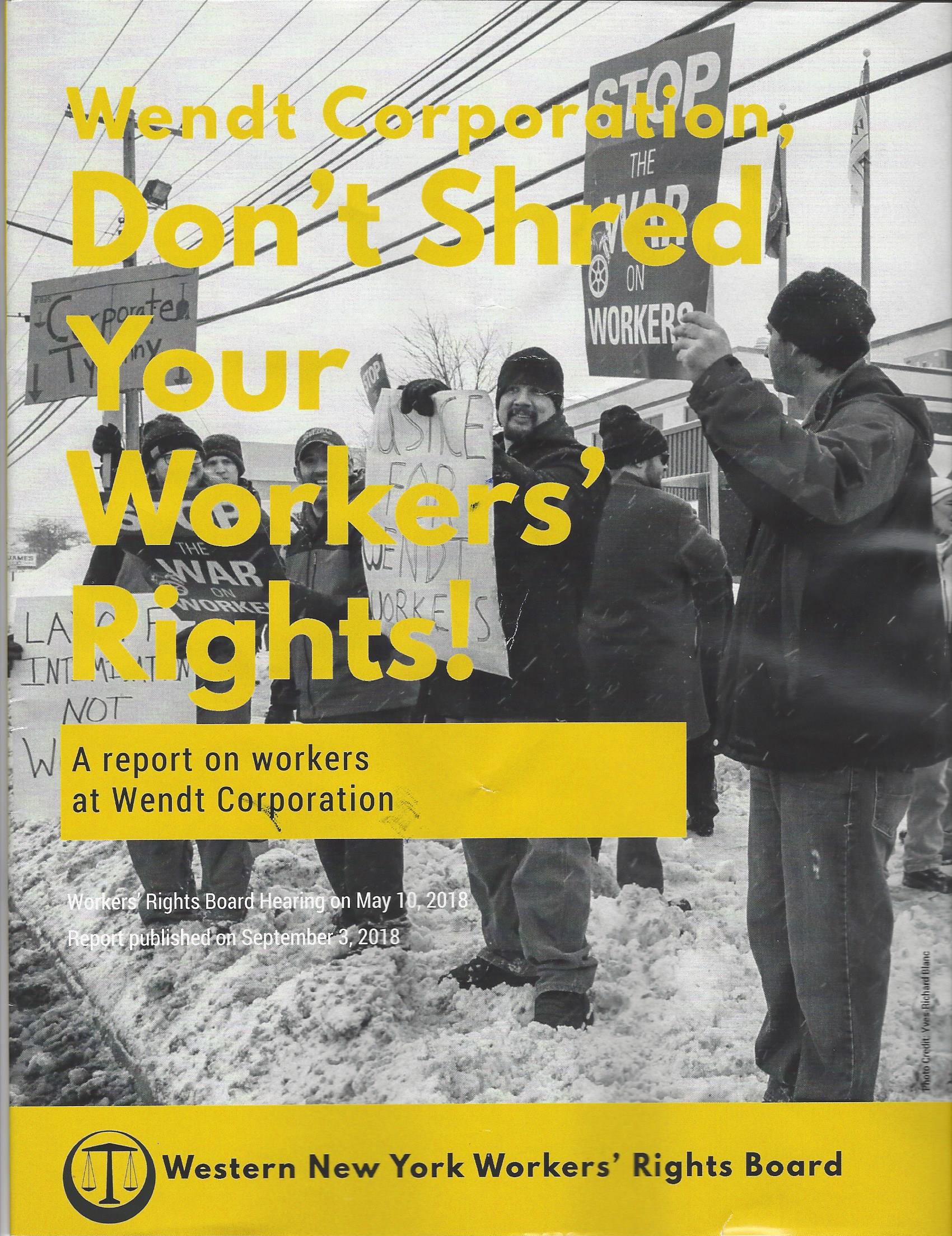 (CHEEKTOWAGA, NEW YORK) - Despite an aggressive company-funded Anti-Union Campaign, Workers employed at the Suburban Buffalo Wendt Corporation - a Cheektowaga-based auto shredding manufacturer, voted by a 70% margin to form a Union in June 2017 and affiliated with Ironworkers Local 576.  However, Workers learned that the company’s unlawful activity didn’t stop after the Union Election.  They were forced to file charges with the National Labor Relations Board (NLRB) and a trial was held in the Fall 2018.  Now, earlier this month, Administrative Law Judge Ira Sandron has issued a decision - finding the Wendt Corporation guilty of more than 20 Federal Labor Law violations.

As stated in the decision, Wendt Corporation unlawfully laid off 10 Workers in 2018 in an attempt to break the Union.  Wendt management had made statements the layoff were not necessary and that it was designed to target Union supporters.  Wendt attempted to claim the layoff was due to a lack of work - however, the company was unable to produce any documents to support its claim they were for “economic reasons.”

The Judge is now directly Wendt to pay lost wages to the unlawfully laid off Workers.

Judge Sandron also found that Wendt engaged in a number of threats to Union Supporters.

According to the ruling, Wendt also unlawfully suspended a Union supporter, treating him more harshly than it had treated others in the past, and unlawfully delayed annual wage increases to Workers in order to punish Union Supporters.

The Judge also ordered Wendt to pay these Workers their lost wages.

Wendt Welder Dennis Bush said he and his fellow Co-Workers “feel vindicated - even if the process is slow, the law is on our side.”

“Wendt has placed incredible and unnecessary stress on us and our families, just because we want a fair place to work.  Many of us look forward to the back pay, but more importantly to a fair first contract to resolve basic safety and fairness issues.  We’re hopeful the company will change its behavior, follow the law, and value our labor,” Bush, Wendt said.

Wendt Workers are continuing to negotiate for a first Union Contract to address what they say are unsafe conditions, low pay, favoritism, and poor manufacturing quality practices.

“It’s ‘been a long process, but Wendt Workers have not been and will not be alone,” Lipsitz said. “The Western New York Labor Movement, Faith and Community-Based Organizations, and Elected Officials ‘will continue to stand in solidarity to support these Workers, until all of their issues are resolved through a fair negotiated agreement,” Lipsitz said.

For More, The Full 56-page ruling is available at:  www.dropbox.com/s/r5nprse9zg01xj0/Administrative%20Law%20Judges%20Decision.pdf?dl=0

In Addition, On Labor Day Of 2018 The Workers’ Rights Board Of Western New York Issued A Report On Many Of The Labor Rights Violations Which The Judge Also Ruled On. The Full Text Of That Report Is Available: https://drive.google.com/file/d/1JNJBMiMjJ-FdBSMAR8Rc2k6FeYetQYvq/view