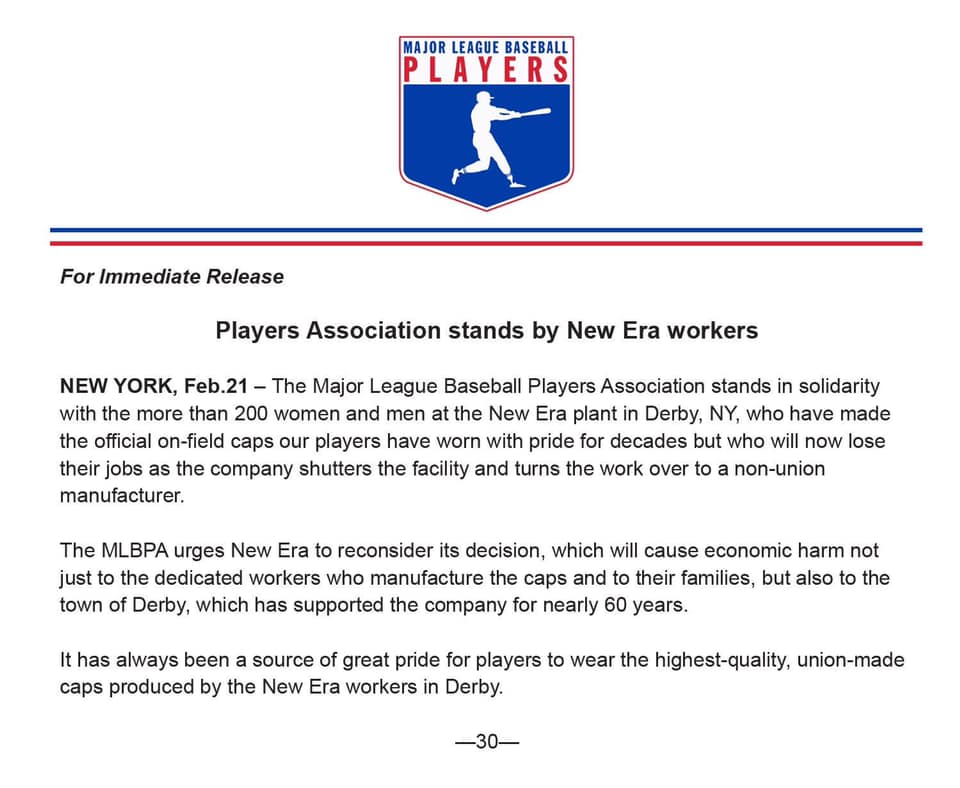 (DERBY, NEW YORK) – Even though the New Era Cap Company has negotiated severance packages for its 200 Communications Workers of America (CWA)-represented Workers at its Derby Plant just south of Buffalo in what appears the final nail in their decision to move the plant to a Non-Union Facility in Miami, there’s been a sudden outpouring of support to keep the Western New York Plant open - most notably from the Major League Baseball Players Association (MLBPA), a Professional Baseball power couple and a Presidential Candidate hopeful.

The closure of the facility, where a variety of professional sports caps are made - including those for Major League Baseball – is resulting in the loss of 200 CWA-represented Workers.

And recently, the CWA announced it had negotiated severance packages for those soon-to-be terminated Workers.

But what further stung the local Union Community - New Era also announced it decided to move the operation down south to Miami, where the cap stitching work will be done by Non-Union Workers.  Under its contract with Major League Baseball, the hats New Era makes for MLB must be produced in the U.S.

As a result of a major push to keep the plant open by the Western New York Labor Community and the subsequent and great amount of national media coverage, several notable groups and individuals have now thrown their two cents into New Era’s decision, including the MLBPA, which released the following statement late last week:

The Major League Baseball Players Association stands in solidarity with the more than 200 women and men at the New Era plant in Derby, NY, who have made the official on-field caps our players have worn with pride for decades but who will now lose their jobs as the company shutters the facility and turns the work over to a Non-Union manufacturer.  The MLBPA urges New Era to reconsider its decision, which will cause economic harm not just to the dedicated Workers who manufacture the caps and to their families, but also to the town of Derby, which has supported the company for nearly 60 years.  It has always been a source of great pride for players to wear the highest-quality, Union-made caps produced by the New Era Workers in Derby.

Then there’s the Major League Baseball MLB power couple - Washington Nationals Pitcher Sean Doolittle and his wife, Eireann, who’ve now involved themselves in the fight to save those 200 Union jobs at New Era’s Derby Plant.

As reported on cincinnati.com, Eireann Dolan was in the car with her husband doing some research on official MLB hats, because her friend was interested in buying one for his son.  But when she searched for New Era, articles immediately popped up about the company closing its Unionized shop in Derby and moving to a Non-Union shop in Florida.

“It’s basically Union-busting, plain and simple,” Dolan told ThinkProgress in a phone interview last week. “The only people wearing (the New Era caps made in Derby) are the players, and these are the players in the Union, so we want to make sure they’re wearing caps that are made by people earning a Union wage.”

And then there’s U.S. Senator Ohio Sen. Sherrod Brown of Ohio, who will decide in March whether or not to run for president.  Brown sent a letter to MLB Commissioner Rob Manfred asking him to use his influence to get New Era to reconsider its decision.  Brown said MLB has exerted its influence in the past to keep a MLB Uniform Manufacturer and its Union-represented Workers in Pennsylvania.

"Pitchers and catchers have reported to camp," Brown wrote in his letter to Manfred. "Opening day is not far off.   The sound of “play ball” and the optimism of opening day – not the loss of good-paying Union jobs – should be what is on the mind of baseball fans across America.  I appreciate your attention to this matter."

For More On This Labor News Story, Click On The Following Links: