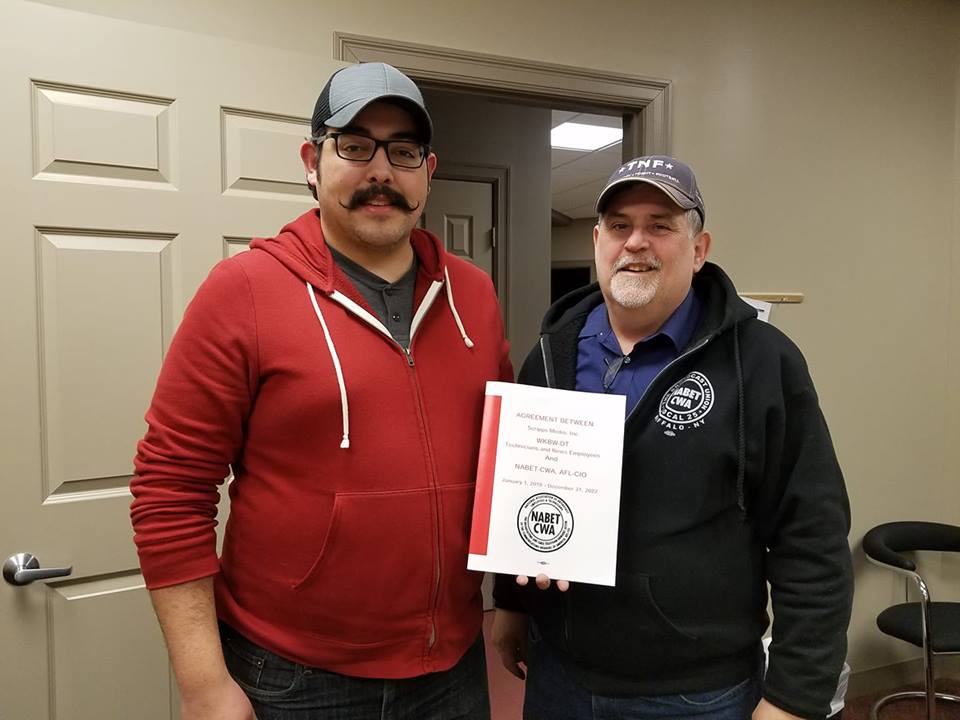 WNYLaborToday.com Editor’s Note: Pictured above, National Association of Broadcast Employees and Technicians (NABET)-Communications Workers of America (CWA) Local 25 President Roy Schrodt (on the right) and WKBW-TV/NewsChannel 7 Steward David Morrales show off a copy of the four-year contract agreement that was recently reached at the ABC-TV Affiliate in Buffalo.  (Photo Courtesy of NABET-CWA Local 25)

(BUFFALO, NEW YORK) – What a difference a change in ownership can make.

After what can only be described as a contentious relationship over the years with the previous owner of WKBW-TV/NewsChannel 7 in Buffalo - Granite Broadcasting, a new four-year contract agreement was hammered out with Scripps Media Incorporated over a remarkably fast two-day period for the television statement’s 50 Employees - who are represented by National Association of Broadcast Employees and Technicians (NABET)-Communications Workers of America (CWA) Local 25, Union Representatives tell WNYLaborToday.com

“Local 25 is ‘pleased to report’ that the deal was reached in two days of ‘productive and mutually respectful bargaining’ with WKBW management and representatives of the station owner Scripps Media Incorporated, and then ‘overwhelmingly ratified’ by the Members before expiration of the old agreement,” said Ron Gabalski, who serves as the NABET-CWA Staff Representative.  “We bargained for two days in early December (2018) and by the end of the second day we had reached a tentative agreement ‘worthy of taking to the Members for ratification.’  ‘It was a different attitude’ that we received from Scripps.”

Gabalski called the quick and cordial negotiations “a story of how an agreement can be reached when Labor Relations ‘are good’ and ‘how much that is a turnaround’ from the previous owners.”

“You recall the ‘long’ boycott that ‘included a declaration of impasse’ by the previous owners (Granite) ‘and the implementation of very bad contract terms’ for the NABET Members at WKBW.  Those terms ‘facilitated the layoff of large numbers’ of Employees, ‘stripping the once proud’ number one-rated station of the Staff ‘that put them on top, and plunging Eyewitness News to the bottom of the ratings,’” Gabalski told Your On-Line Labor Newspaper.

“In 2014 Scripps took ownership and ‘immediately worked to improve relations’ with the NABET-represented Employees, ‘despite it being a purchase that did not obligate them to retain the contract.’  Shortly after that the contract came up for renewal and a new agreement was reached to cover January 2015 through December 2018.  This is the second contract with Scripps,” he said.

The previous agreement was set to expire on December 31st (2018).  Scripps “came in with a light list of proposals,” but NABET-CWA Local 25 “had a list of proposals that was longer, ‘but still relatively short,’” Gabalski said.  The company “was receptive to hearing our concerns on proposals and we came to agreeable terms on nearly all of the proposals we submitted and we were also able to reach agreements on the items the company proposed,” he said.

“Without too much of a fight” from management, Gabalski said WKBW-TV’s Union-represented Employees will receive wage increases of 2% in each of the four years of the contract.

However, NABET-CWA was also successful in negotiating an agreement to keep the base rate in the contract moving throughout the term of the agreement by an amount that involved a guaranteed increment of $2/hour over the Minimum Wage, which is required by law.

“If there had been ‘no’ agreement to change the language for the base rate, New York State Minimum Wage ‘would have risen up to and likely surpassed the minimum rate in the agreement before the term expired,’” Gabalski said.  “The Union ‘was pleased that the company did not disagree that jobs in TV are not and should not be minimum wage’ jobs and they were ‘committed to making sure the base rate was always a measurable increment above Minimum Wage.’”

There were “no changes” made in the areas of health care benefits and an offered retirement plan, but “improvements were made to working conditions,” Gabalski said.

On another front, one of the issues the company asked to address was being able to have News Producers sign Personal Services Agreements - a practice that is becoming more and more common in TV News, as there is currently a shortage of such professionals who have the skills to do the work - and are willing.

NABET-CWA “made it clear” to management that it “did not want” Channel 7’s News Producers to find themselves in a future position where especially young and talented News Producers are held to a low wage agreement, confining them to involuntary servitude at a rate of pay that is below their skill level for a period of three years.

After trading a few proposals, management “made an offer to do a ‘trial’ run,” Gabalski said.

Currently, other TV stations in Buffalo are hiring News Producers for as little as $32,000 per year and binding them to a three-year stint.

WKBW/Scripps agreed to not bind any News Producer for less than $40,872 per year.

NABET-CWA “felt that was a ‘fair offer and a good trade’ to help reach an overall agreement,” Gabalski said.