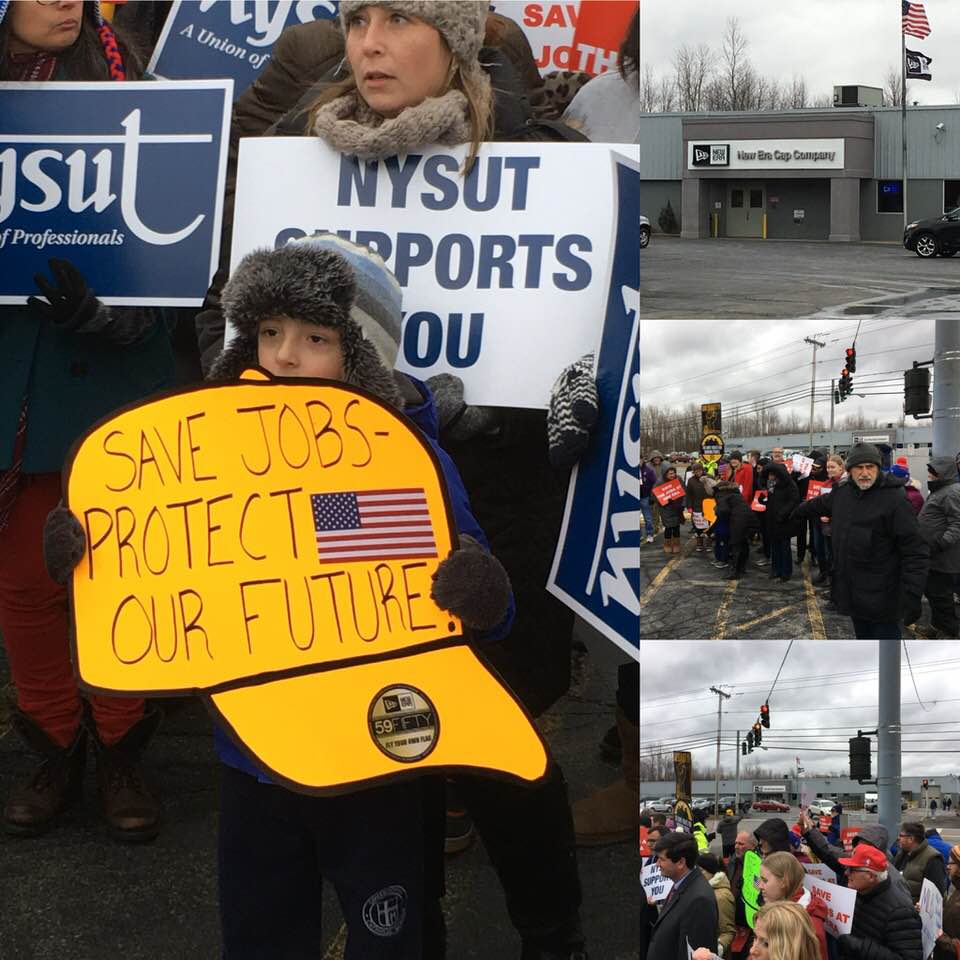 (BUFFALO, NEW YORK) – The Western New York AFL-CIO Area Labor Federation (WNYALF) is recognizing the closure of the New Era Cap Company’s Derby Plant after a weeks-long fight to keep it open as the Communications Workers of America (CWA) has formally bargained final Worker Severance Packages, but in turn is publicly criticizing the company for “abandoning” the Buffalo-Area Community and for ultimately “busting” the Union.

A statement released by the WNYALF said, in part: “(CWA) had a good relationship with its Union, evidenced by numerous renewals of its Labor Agreements since the beginning of the century.  Yet, they have decided to abandon our community.  We are more convinced now than ever, that this move is being done in order to bust the Union and to maximize their profits at the expense of their workforce and the community of Derby, New York.”

The closure of the facility, where a variety of professional sports caps are made - including those for Major League Baseball – resulted in the loss of 200 CWA-represented Workers.

Earlier this week, the CWA announced it had negotiated severance packages for the soon-to-be terminated Workers.

But what further stung the local Union Community - New Era also announced it decided to move the operation down south to Miami, where the cap stitching work will be done by Non-Union Workers.

Under its contract with Major League Baseball, the hats New Era makes for MLB must be produced in the U.S.

The announcement mobilized the area’s Union Community and its allies, who came together to launch a campaign to get New Era to change its mind.

Its #NewEraHatsOff Campaign, which was spearheaded by the New York State United Teachers (NYSUT) Union, and assisted by the Coalition for Economic Justice, gained widespread publicity through media coverage of its many informational pickets and efforts aimed at owner Christopher Koch, who went to school in the Lake Shore Public School System growing up – the School District where the Derby Plant in located.

The WNYALF statement, in full, reads:

On February 12th, 2019, an announcement was made public of a settlement in the effects bargaining over the closing of production at the New Era Cap facility in Derby, New York.

The Western New York Area Labor Federation respects the decision made by CWA Local 14177 to make the best possible deal for its Members in the New Era Bargaining Unit.

Closing of the relationship between the company and the Union is always a very difficult one.

The Workers, while receiving a package that will help them in the immediate sense, ends their employment, and as such makes their future work prospects cloudy at best.

We wish them the best and pledge to work with CWA and the government to help these Workers find new employment.

However, we would be remiss if we spoke no more on this closure.

New Era has pretended to be a “good” corporate citizen.

It took numerous incentives from the State and County to expand the facility.

It admitted it is making money at Derby.

It has a long-term contract with Major League Baseball.

It had a good relationship with its Union, evidenced by numerous renewals of its Labor Agreements since the beginning of the century.

Yet, they have decided to abandon our community.

New Era is going to move much of the Derby production to a Non-Union plant in Miami, Florida.

While they say they are about to change their business model and become a more market-oriented company, we have seen reports that they are planning to greatly expand their operations at the Miami plant.

The WNYALF has been at the forefront of a campaign to save the jobs in Derby.

This campaign operated on several levels including a vigorous social media effort - #NewEraHatsOff - and several rallies and/or press events.

We committed to this path because of the outrageous nature of the move.

We are more convinced now than ever, that this move is being done in order to bust the Union and to maximize their profits at the expense of their workforce and the community of Derby, New York.

We are proud of our efforts on this front and will not hesitate to call out any corporate entity that follows the path of the New Era Company in the future.

In this light, a special debt of gratitude is owed to all the affiliates of the WNYALF, our community allies and to those political leaders who continue to raise their voices on behalf of the Working People.