Via The Pitt News: University Of Pitt Faculty See Future In Going Union 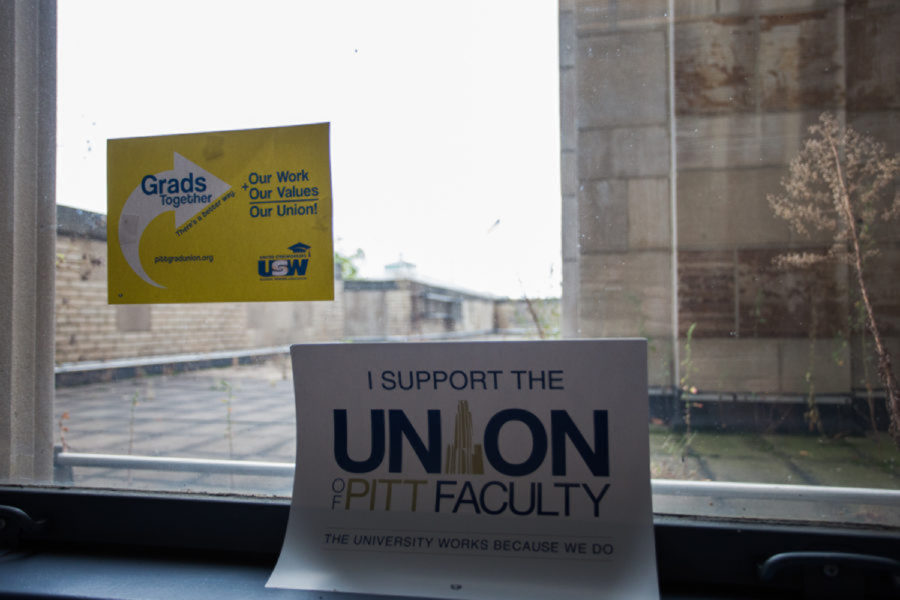 (PITTSBURGH, PENNSYLVANIA) - To most passersby, the fliers, posters and comics adorning the office doors in the narrow corridors on the fourth floor of the Cathedral of Learning blend in with the rest of campus - but for Tyler McAndrew, a visiting Lecturer in the English Department at the University of Pittsburgh and prominent Faculty Union Organizer, the posters that read: “I support the Union of Pitt Faculty” represent years of grueling campaign work.

“I’ve been knocking on doors every week for the past two and a half years just trying to have conversations with professors about how a (Faculty) Union ‘could improve their lives,’” McAndrew said. “That effort began right here in the English department.”

McAndrew’s own office is outfitted with many of the same pro-Union posters.  But while McAndrew is heartened to see Pro-Union Fliers scattered all across campus, he said the most tangible sign that organizers’ efforts were successful came last month, when Pitt filed for a Faculty Union Election with the Pennsylvania Labor Relations Board (PLRB).

According to McAndrew, the Organizers spent several years campaigning with their peers before even beginning to collect cards, attending monthly meetings, refining their talking points and ultimately going out into the field to persuade other professors to support the cause.

“We really needed to gauge interest among the faculty here at Pitt,” he said. “Once we started collecting cards, we only had a year to get at least (30%) of Professors on board for a vote.”

Once the PLRB verifies that more than 30% of faculty have signed cards, it will set a date for a Union Election, assuming the University doesn’t contest the filing.

At least 50% of Professors must vote yes to institute the Union at the University, which would be affiliated with the Academic Workers Association, a division of United Steelworkers (USW), according to USW spokesperson Jess Kamm.

“We’re here to be a resource for the Union effort,” Kamm said. “We know the legal processes they have to go through, we know strategies that tend to work in organizing, but really it’s the faculty who are leading the way with this.”

McAndrew said he’s unable to reveal the number of Professors that signed cards, but he thinks the Union bid will succeed if it goes to an election.  “We have supporters from all different departments, at all different levels with all sorts of different grievances,” he said.

To Continue Reading This Labor News Story, Go To: https://pittnews.com/article/143959/featured/pitt-faculty-see-future-in-union/?fbclid=IwAR1Hbrk2w0tVDlvy856lKEgMCKIwvvmUp_bdDvJYIvowPwNCHSS8JHLO_7A